Past and Present Significance of the Cultural Revolution

[Introduction: I am very impressed and touched by this essay, written by a college senior in Physics. Not only is it well-written, but it demonstrates the discerning eyes of a thoughtful reader.  It gives me hope for the young generation. In addition to Michael's carefully laid-out analysis of the stories and characters, which is very interesting, please pay special attention to his conclusion, which catches the nuance of one of the book's main themes. Posted with permission. -- Xujun]


In Apologies Forthcoming, Xujun Eberlein presents a number of perspectives on the Cultural Revolution. In “Disciple of the Masses,” the reader observes the changing personal meaning of the Cultural Revolution in Shanzi as she realizes a more sophisticated view of her place in China’s political and economic framework. Belatedly, “She saw a reality that would never be taught in school. Sorrow overtook her, and she whispered to no one, ‘I’m sorry…’”. In “Disciple,” this new insight is lost forever, but in “Second Encounter,” the reader is shown how this realization of shame creates both tentative hope and enduring difficulties for all who live with its memory. The author explores the Cultural Revolution’s significance not only across social and gender boundaries, but also across time, illustrating a dynamic picture of meaning that helps the reader understand the Cultural Revolution both as an immediate experience, and as a shared historical tragedy with current and future implications.
In the closing of the book, Wei Dong notes “only those who survive the waste can understand”, and indeed, in “Disciple of the Masses,” Eberlein presents a detailed and messy picture of understanding in transformation, catalyzed by an environment of unremitting tragedy. In the course of the chapter, Shanzi’s confident commitment to revolution develops into a more sophisticated appreciation of the social, political, and economic conflicts within China. However, her story is also characterized by a singular resistance to this change, as Shanzi becomes an unwitting perpetrator of tragedy before recognizing it in the lives of those around her.
Interestingly, Shanzi is portrayed as a highly observant individual. She repeatedly notes the telling details of life in Lily Village, the evidence of suffering. However, her capacity for observation is neutralized by her inability or unwillingness to analyze her environment. When Shanzi first encounters Secretary Xia, she can immediately tell he “had never worked in the fields”. Yet, late into the chapter, she’s still hesitant to view his treatment of the villagers as unfair. Even after nearly a year of observation, “she needed more time to think” before accepting the existence of the social conflict she’s beginning to see.
This superficial nature is immediately apparent in the reader’s introduction to Shanzi. When Mr. Tan asks her why she is being sent to the countryside, he effectively probes her understanding of her role in current events. Again, Shanzi’s interpretation is shallow; she doesn’t even understand the point of asking, as the movement is “mandatory”. While certainly aware of her situation, she does not question or analyze, simply accepting what she’s told to do. Once in Lily Village, her initial ignorance, though understandable, is highly reluctant to give way. Eberlein’s division of the chapter into “seasons” reminds the reader of the sheer amount of time passed, and Shanzi’s delay comes across as even more striking. As soon as the “Summer” marker passes, the reader is aware Shanzi has spent at least two full seasons immersed in peasant life, yet is asking for expensive delicacies and wildly inappropriate questions such as, “do you always have watery gruel?” When Zhou Sixth mentions “public rice eaters” affinity for lotus root, Shanzi’s response “I like them too” shows she does not yet view herself as part of the crisis of want surrounding her. 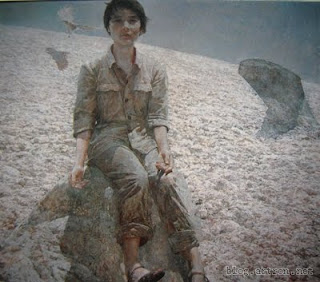 "Youth" (oil paining by my friend He Duoling)
Shanzi’s eventual realization of the social and economic conflicts surrounding her is thus accompanied by the shock that she’s been a part of them all along. When “the caveman” begins to breach Shanzi’s carefully constructed worldview, she initially refers to an enemy “they,” responsible for China’s deterioration. The correction to “us” profoundly disturbs Shanzi. For her, as with many of the characters in Apologies Forthcoming, the lessons of the Cultural Revolution do not only change their view of the times, or of China, but bear deep personal significance and abiding pain. In the end, “I’m sorry” apologizes not only for informing Secretary Xia of Lily Village’s grain production, but for being part of oppression she didn’t understand.
In “Disciple of the Masses,” Shanzi’s experience is a tragic example of not only loss of potential, symbolized by the unsolved Goldbach’s Conjecture, but loss of memory and learning. However, Wei Dong carries a similar realization to the present, giving him the opportunity to consider the meaning of the Cultural Revolution to both himself and future generations with no direct memory of it. In particular, Wei Dong’s experience in “Second Encounter” shows the enduring difficulties of those that survived the Cultural Revolution. Even before Wei Dong encounters Zhang, he expresses fear of a “mainlander who would not hesitate to lay ambush for a fellow Chinese”. Though Wei Dong seems a model of forgiveness and change, his memory of the Cultural Revolution haunts him with anxiety and mistrust.
In light of Wei Dong’s concerns over future generations repeating the catastrophe of the Cultural Revolution, his difficulty in discussing the past is quite threatening. In his final ruminations, Wei Dong mentions how passing through the Cultural Revolution may have been necessary to understand his own ignorance. However, shortly thereafter, he decides to stop thinking about it. Though he recognizes the necessity of remembering his shame, he is nonetheless quite resistant to actually doing so. This is more powerfully demonstrated throughout his discussions with Zhang. Despite Zhang’s openness, Wei Dong is reluctant to share any information, or even partake in the meal. When Zhang asks Wei Dong for his motivation in freeing him, Wei Dong deflects the question.
Thus, though Apologies Forthcoming shows hope for the future, that hope is portrayed dubiously, as the understanding requisite for future progress is necessarily accompanied by shame. While the shame itself may be a positive influence, the magnitude of the crimes of the Cultural Revolution enhances it to such an extent so as to choke Wei Dong’s attempts to discuss it. When current events remind Wei Dong of his own crimes, “his hands sweat cold”. As distant as the Cultural Revolution may be in place and time, its memory still bears acute significance, enough so to elicit a physical reaction.
At the same time, Wei Dong possesses a remarkable ability to examine his experience. When Zhang recounts the armed fight ‘8.31’, Wei Dong is clearly tense, checking nearby tables, goosebumps rising from the details. Though his emotions are heightened, his thoughts and questions show him approaching the situation with outward detachment. He patiently waits out Zhang’s dramatic presentation of events, carefully confirming the details. Repeatedly, Wei Dong nonverbally verifies Zhang’s account: his superstition, his numerical accuracy. In a number of instances, Wei Dong assesses the motivations of himself and his team. He also attempts to reevaluate the story’s personal significance, asking Zhang if his team killed others after he was freed. Eberlein takes care to note that through all this, Wei Dong holds his cup steadily.
Both “Second Encounter” and “Disciple of the Masses” are stories about realizing the painful realities of the Cultural Revolution. The opening quote connects the stories in this way. Between the two, Eberlein presents the Cultural Revolution as a continuing learning process, viewed from two different times. One story is looking back on the Cultural Revolution while the other lives in it, but both reflect on it. For Shanzi, her newfound awareness is a personal shock,not only upending her scholastic paradigm but elucidating her involvement in the structure of social and economic oppression surrounding her. Even as the surrounding catastrophe enables this realization, it consumes her. However, Wei Dong’s story explores the unique opportunity survivors of the Cultural Revolution have to put these lessons to use. His recognition of his own learning and of the necessity of its continuance show how the Cultural Revolution will and should remain a part of the public consciousness. However, the difficulty with which he endures it exposes lasting challenges to present and future generations. By considering the Cultural Revolution from both perspectives, Eberlein shows its lasting significance and more completely probes its complex meaning to a variety of audiences.

Email ThisBlogThis!Share to TwitterShare to FacebookShare to Pinterest
Labels: On "Apologies Forthcoming", The Cultural Revolution