[Note: I find the author's summary and criticism of contemporary Chinese art from the late 1970s to present involving the Cultural Revolution extremely interesting and well-formed. Translated with occasional comments (in italic) and annotation added. Original post is slightly longer with a few more images shown. – Xujun] (XNZKZXA4YWZH) 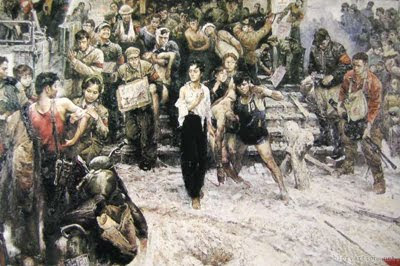 "x/x/1968, snowing" by Cheng Conglin (1979)
The Cultural Revolution ended 30 some years ago, but contemporary Chinese art continues to make a matter of it, as if it wouldn't be contemporary if the CR were not addressed. Reflections on, or utilization of, the CR requires a serious analysis.


It marked the starting point of China's contemporary art. 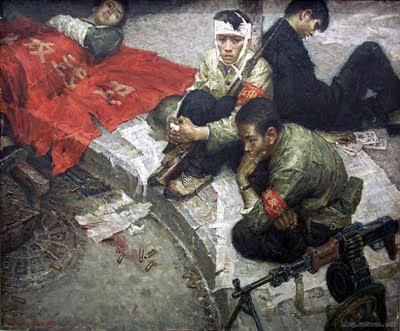 "Why" by Gao Xiaohua (1978)
Representative works include Cheng Conglin's "x/x/1968, Snowing," Gao Xiaohua's "Why" and other works reflecting "armed fighting." He Duoling produced "Youth" in the 1980s, which became the epilogue of that wave. Scar art's attention to the CR has artists' commemorating and lamenting their brutal youth; though more of individual experiences, it was in tune with the time's rethinking. Scar art lacks deep reflection on the CR; it uses victim pathos to touch the audience, but is only superficial in its rethinking. At that time this was already difficult and valuable, but its obvious limitations come to show as time goes by.
[I don't completely agree – I view those works as deeper than most of their later counterparts. I still remember how, as a college student, I first saw He Duoling's oil painting "We Once Sang This Song", and how the feeling of shock it caused in me lasted for years. There wasn't  obvious "victim pathos" in that painting, only the scene of a bunch of young "zhi-qing" – city youth sent down to the countryside – singing a song, yet its impact was profound.  –  Xujun] 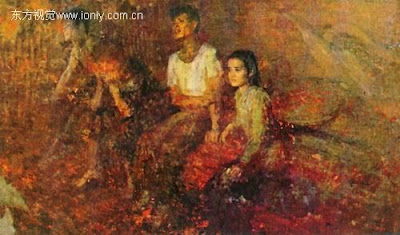 "We Once Sang This Song" by He Duoling (1980)
2. Early Trend of Modern Art in Reflecting CR


Part of the works in the "Stars" art exhibition [in 1980] criticized the CR's totalitarianism from a democratic perspective; the "Great House Head" series produced by southwest "stream of life" artist Mao Xudong echoed this trend. They touched the core issue of the CR, that is, the intrinsic connection between the CR and 's feudal dictatorships. This trend clashed with the mainstream ideology then; its artistic method is symbolic and metaphoric. This also reflected the sprouting of democratic awareness in the 1980s' ideological liberation movement. 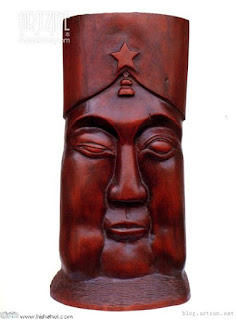 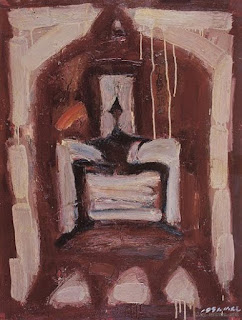 
This is represented by Wang Guangyi and Zhang Xiaogang.   Wang Guangyi's work directly borrows from posters of the "great criticism" era. It is a kind of commemoration of an unforgettable past; however, in reality, the big shift to a market economy makes that past more and more remote.  Wang Guangyi forcefully pulls that past back in sight, but he also realizes the irreconcilable conflict between the two. Is it a better choice to have Coca-Cola advertisements replace "great criticism" posters? [Good question.] It is difficult for us to give a positive answer. Wang Guangyi's work reflected the Chinese people's bafflement. 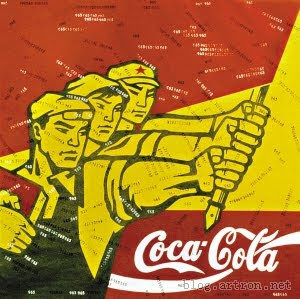 "Great Criticism" by Wang Guangyi (2003)
Zhang Xiaogang's "Big Family" series entered Chinese's collective subconscious. These yellowed old pictures induce a melancholic mood of nostalgia, like the melody of an old phonograph record that can't be waved away. This category of political pop art has been mistakenly interpreted as an insinuation of 's political reality, and improperly analogized with ex-USSR's political pop art, by some Westerners. [Interesting.] 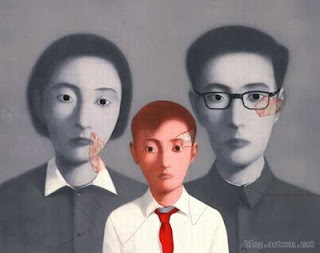 "Big Family" by Zhang Xiaogang (1993)
4. Satire Use of CR Images in Cynical Realism and Vulgar Artwork 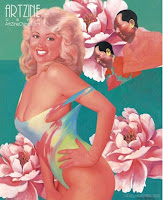 The 1989 rumpus [i.e., the Tiananmen massacre] is the background of those works, which focus on 's social reality rather than historical rethinking. They have been labeled as "post 89", and show a political attitude through teasing those once sacred political symbols and images. In dispelling the lofty and disassembling grand narratives, they show a kind of criticalness; however such criticalness is more like a seasoning spice, its cynical attitude refuting serious thought. Thus these works often reduce to a superficial teasing of ideology, their awkward status of "embassy art” based on denying one ideology while having to rely on a different ideological pivot. [Well said.] 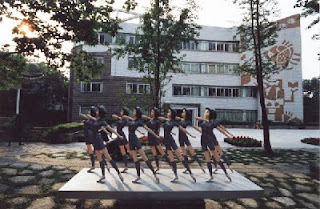 The post-80 generation was born in the reform era after the CR, and they don't have the direct experience of CR like the "zhi-qing" (the sent-down youth) and Red Guards did. To them the CR was an incomprehensible comedy. CR symbols are cool extraordinary fashion as well as the art market's popular Chinese card. Using their familiar cartoon style to treat the CR symbols becomes those artists' common strategy. 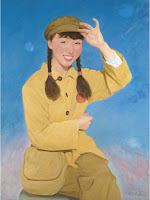 6. Commercial Interest
Driven by commercial interests, the opportunistic use of CR symbols is largely a petty speculation of the art market. Those works completely lack the spirit and point of cultural criticism; all they present is shallow consumption and desire.


7. Middle-Aged Artists' Rethinking and Recalling
The 30th anniversary of the end of the CR [in 2006] was a symbolic time. The CR was again remembered. As a reflection of the society's mentality, the impulse to nail the coffin and give a final assessment of the CR is understandable.  Furthermore, the mainstream ideology's meticulous avoidance caused a backfire. The rethinking of the CR from middle-aged intellectuals broke through personal experience and rose to historical significance, restoring that history's heaviness and tragic nature. However, this rethinking more often than not stopped at ceremonial commemoration, not raising new questions, and often encounters a double misread from both power and capital. 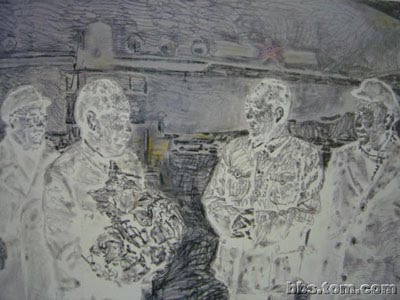 "Comrades" by Liu Yong (2006)
Conclusion
The Cultural Revolution was 's most enthusiastic and dreamy time, and it was also a time of broken dreams. In our lofty sentiments and happiness under brilliant sunshine, what we lived through was actually an unprecedented catastrophe. Contemporary new Confucians view the cleft in Chinese culture as formed by the May 4th movement [in 1919], but in fact following May 4th was a period of cultural prosperity with all-inclusive cultural trends and thought schools, which established the foundation of modern Chinese culture. But in the Mao era, especially during the CR, we abandoned traditional culture and denied foreign culture, everyone taking pride for being a rough uneducated person, culture falling into a deep abyss. That, was the real cleft of Chinese culture. […]

Today the CR remains a carefully guarded topic. The CR is far from entering history and still linked in a thousand ways to present . Politics is an art of compromise. Deng Xiaoping oversaw Chinese society's rapid transmission to a new track without getting overly entangled with past issues. Today, despite 's great economic progress, it still faces huge pressure in its development as well as severe social conflicts.   Though the CR has ended for 30 years, historical truth still hasn't been completely revealed. It is not yet time to deliver the final assessment. Temporary avoidance is the practical choice for the incumbent party; however for intellectuals as a collective to rethink the CR is not necessarily a conflict. The first requirement, for such rethinking to have significance and strength, is that it must reach the level of rational historical judgment.

In the post-CR era, in 's art field, the CR has gradually changed from a serious social tragedy to an entertaining comedy for a consumer society. How we commemorate the CR today is a question Chinese can't avoid!!!  Fu Lei once said, "Only real suffering, is capable of driving out romantic imaginary suffering; only the brave tragedy of overcoming suffering, can help us to bear brutal fate; only when we hold the spirit of 'If not I to hell, then who?', can a dispirited and selfish nation be saved."  Fu Lei committed suicide in the CR; he took the hellish way to warn and try to save the nation he loved. However, he would not know that the once brutal real suffering has now become a romantic imaginary suffering, and what a dispirited and selfish soul today's Chinese have. [A powerful statement.]

The Cultural Revolution：unable to get around；not daring to face up;  no way to dispel; unwilling to forget；a thousand contradicting and complex feelings buried in the heart.#
Posted by Xujun at 12:00 AM

Email ThisBlogThis!Share to TwitterShare to FacebookShare to Pinterest
Labels: arts and entertainment, China and Chinese, The Cultural Revolution

The work illustrated in your article as (title and author unknown) is by Wang Keping and is titled Ouxiang (Idol), 1978, stained birch, height ca. 40 cm.

Thanks Jason. Info verified and added.