Food to Die For

In the March 1st issue of the New Yorker, the most fun piece to read is "Where's Chang?" by Calvin Trillin. Despite being a big eater of () cuisine, I'd never heard of Peter Chang before, but I’ve converted to a "Changian" afterwards. :-) I also didn't know a restaurant critic's writing could be as delicious as the food –  just read Todd Kliman's description of Chang's Roast Fish:

…really, a heaping plate of expertly fried fish, dusted with cumin, topped off with chopped ginger, fried parsley and diced chilies and served in a thatched bamboo pouch.

And John Binkley's comment on an off-the-menu special provided by Chang:

…crispy eggplant cut like French fries and salt-fried with scallion greens, a hint of cumin, and hot pepper. To die for!

Why not.  From now on I'll be searching for Peter Chang whenever I travel.
Calvin Trillin is such a poised essayist, who is capable of turning a food piece into a thriller. This essay about Peter Chang is structured like a detective story, following each clue from Chang's frequent disappearances and his loyal followers' persistent efforts at tracking him down.
Those eaters' faithful following of Chang's authentic cooking seems to indicate an increasingly more sophisticated taste for Chinese food among Americans. As a Sichuanese living in , one thing I hate the most is the pervasive existence of take-out places that produce Americanized, fake food. Whenever I hear an American praising that kind of food I immediately get a toothache. Worse, the majority of chefs fall into the awful demand trap and cater to American’s taste expectations; as a consequence it has become very hard to find great cuisine in the area.
Fortunately, as I mentioned in a previous post, an excellent newcomer in the Framingham area is Red Pepper, whose chef is a down-to-earth Chongqing man nick-named Old Black, who really knows how to cook. He doesn't use cumin often, as cumin was not commonly used in traditional dishes, but Red Pepper does offer a dish named "Cumin Flavored Beef with Chili Sauce," which sounds like a variation of something that might be on Peter Chang's menu. It tastes great. 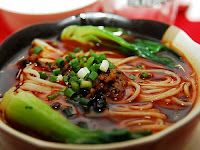 Even Red Pepper sometimes caters to American tastes. When we lived in , one dish Bob and I loved was Dan-Dan Noodles. Naturally that was the first thing we ordered from Red Pepper. The noodles tasted not bad, but were unlike their namesake, without even the signature ingredient of sesame butter. The manager told us "Americans don't like real Dan-Dan Noodles," so they modified it.  Thankfully, under our persistence, they’ve added back the sesame.
On a related note, if you are interested in international recipes, it might be worth checking out Matthew Lubin's blog The Laowai Kitchen, written in both English and Chinese.
Posted by Xujun at 10:06 PM

Email ThisBlogThis!Share to TwitterShare to FacebookShare to Pinterest
Labels: humour and food, International

You can go to www.chowhound.com and search the China Star threads on the DC board. There's a cult of followers of Chef Chang and his many incarnations in restaurants in the DC area and across the south. And I absolutely loved Calvin Trillin's book "Feeding a Yen," about his many gastronomic quests in NYC and beyond.

On the point of Americanising Chinese food, I never know whether this is a genuine reason or one given as an excuse to serve cheaper food i.e. by using jarred sauces and processed ingredients. I find the Americanised version fairly disgusting and only eat the more authentic stuff. True, I've lived in China but still, there's no comparison! I would have think that Americans are disinclined to eat particular types of food e.g. more exotic animals, organs, meat with bones in it than object to particular flavours.

Or maybe it is a case of educating the palates by making Chinese food more accessible - encouraging people to move beyond the typical dishes of General Tso's Chicken, etc. I figure if I like proper Chinese food (and I'm now starting to have cravings as I write this), then there's no reason why others wouldn't. I can, however, understand how people might be intimidated by the multitude of dishes on a menu and not know how to order them - that is something my friends don't really understand when we all go to a Chinese restaurant and so I generally do the ordering to ensure a balanced set of dishes that go together. And they always love it. Sometimes, I think Chinese restaurants are still stuck in the Chinese vs barbarians mindset and so only appeal to Chinese patrons because they think foreigners don't really 'get' the food. Cross-cultural mis-communication? I don't know. One day, though, I'll open up a Chinese restaurant and fill the gap in the market...

Also, thanks for the tip on Red Pepper, I will have to check it out! And if you have any other recommendations for good Chinese restaurants (not just Sichuanese), please pass them on. My wife and I live in Cambridge and go to Hua Mulan (http://mulan.4t.com/), which is pretty good (it might actually be Taiwanese-owned). Bizarrely enough, we haven't made it down to Chinatown yet!

Red Pepper is fabulous! Thank you for taking us there, Xujun!

I live in Los Angeles, where the Chinese food options are pretty good, but I still have to drive a ways for them, to the San Gabriel Valley -- once you're there, you really will wonder if you're in China (except for all the Mexican restaurants and signage next to the Chinese). But on the west side of town, it's mostly the Americanized stuff, which makes me so very sad. And there's no doubt that plenty of Angelenos want the real thing!

Anon, thanks for the tip. Good to know where to look for Peter Chang!

Peter, I don't think it's true that Chinese restaurants try "only appeal to Chinese patrons." If anything, it is the opposite. There was a wonderful Beijing restaurant in Newton that started with authentic food then switched to an all American menu. I asked, and their staff said that was what sold. It's all market driven. So as Americans' tastes change, hopefully more authentic food will be available. And thanks for the tip about Hua Mulan - we ought to try that out!

Susan, my pleasure! Glad you enjoyed it. Come again next time.

Lisa, that's interesting about the divide in LA. Is that because there's a big Chinese population around San Gabriel Valley? Sadly, even in Boston's Chinatown it's hard to find decent Sichuan cuisine.

Thanks for the plug, maybe I can use it to motivate my wife to translate more posts or for me to learn more Chinese so I can translate it myself.

The Americanized Chinese food does get annoying when you discover the real thing. I do still plan to try the Americanized fusion restaurants around Jersey City--we have Chinese-Mexican food and Mexican-Chinese food.