Chongqing Nostalgia. Where Is It?

I took the following photos earlier this month during my visit to Chongqing, where I could find few traces of anything familiar from my childhood.


The Liberation Monument (解放碑)– Yes, that piteous little thing in the center – the Liberation Monument used to be the great landmark of Chongqing.  Is the towering building on the left purposely trying to mock and humiliate it?
Flat Bread (烧饼) – Oh my childhood favorite snack! Street vendors of flat bread used to be seen in every block of downtown Chongqing . Now walking through the entire Central District I found only one, hiding in a corner of Eighteen Steps (十八梯). The couple who were making flat bread at first panicked seeing me taking photos; they thought I was a "cheng-guan" (城管) who came to seize their little business.

Controversial Nude Sculpture – On Chongqing's first Yangtze Bridge, the four nude sculptures, "Spring," "Summer," "Autumn" and "Winter" sparked a big controversy that embroiled the entire city, even the country, in the early 1980s (I participated in the debate).  The artists eventually yielded to public pressure and added a sheer veil for each figure.  The one in this photo is "Spring." (It apparently has been moved because the bridge's width is now doubled.) 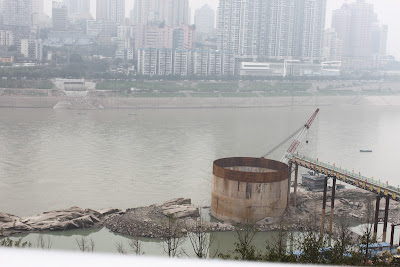 The Obsoleted Ferry – In this photo, where a new bridge for light rail is being built, there used to be a ferry dock that I frequented as a child.  My home was on the south bank of the Yangtze looking down those rocks, my childhood haunts.  When I left China in 1988, there was only one bridge on each of the two rivers, Yangtze and Jialing, that surround the city, and ferries were the main connection between the three land areas (The South Bank, River North, and Central District).  Now the total number of bridges exceeds twenty, and all ferries have become obsolete.
Posted by Xujun at 1:39 PM 8 comments:

(I'm back from China now. So good to be able to access my blog again! This is a quick post about new developments in the Li Zhuang case.  Li Zhuang was the Beijing lawyer who tried to defend a "gangster" in Chongqing and was jailed himself last year. )

In English:
In Chinese:
For more background information, here are my posts following the case last year:
Posted by Xujun at 7:49 AM No comments:

Lunch with Chinese Friends in Chongqing

by Bob Eberlein
(posted via proxy)


This week I had the opportunity to sit down to lunch in Chongqing with my wife and several of her acquaintances. While my ability to understand Chinese, and even the Sichuan dialect, is pretty good for day-to-day things, my vocabulary is limited, so whenever topics stray too far from the necessities of life, my ability to follow becomes more limited.
The lunch topic I was most keen to see discussed  was Bo Xilai, Chongqing’s Party boss who, from crackdowns on criminal gangs to the widespread promotion of Red Songs, is having a big impact on the landscape of Chongqing. My interest was as much in watching the talk; body language reveals a lot and I was wondering both how forthcoming and how energetic her friends would be in discussion. There were two businessmen, who had ridden high on the wave of China’s development, along with an academic. All were living pretty decent lives in modern China.
Reticence, I have to say, was completely lacking. In fact, when the discussion turned to censorship and the freedom people have to speak out in China the attitude was basically that they could say anything they wanted. I am skeptical that this is true, and I learned long ago that, even in America, simple courtesy, along with the desire for continued gainful employment, don’t allow me to constantly say exactly what is on my mind. Still, their attitudes were genuine. They were thinking about speaking privately among friends, not looking for a public platform to express their opinions, and unencumbered speech is pretty believable in that context.
Actually, the whole topic of free speech engendered a great deal of discussion. A lot of time was spent with one person saying, and another agreeing, that China had made great progress in this regard. Discussion of progress in one area led to discussion of progress in another area and again there was agreement progress had been made. No one contested any of the statements about progress, but lots of time was still spent on the topic. There is a feeling among Chinese that foreigners do not recognize that things have changed. I can understand this, and it may actually be a true perception of some foreigners, but it is odd so much time was spent there.
But what did they think of Bo Xilai? For me, the nature of the answers given was the most telling. He controlled the unchecked migration from rural to urban Chongqing, imposing an order that has been helpul. His crackdown on criminals has made Chongqing safer. The Red Songs are just like advertising and mean nothing (even if they are silly). Mostly they seemed very positive about what Bo Xilai had done, though I was a bit out of my depth trying to understand, so nuances of how he might have done things better likely passed me by. They looked at the decisions to be made as complicated, and (here I am guessing) admired the man for being able to make hard choices.
Xujun kept pressing on the inherent weakness of the system, and they kept pushing back. As I listened I was hearing about what I would call policies, when Xujun wanted to talk about Bo Xilai and his politics. Xujun translated the response she kept getting as the problems are technical, not systemic. Afterward, when Xujun told her sister they had named the problems as "technical," her sister responded “What does that mean?” Indeed that was the question I had, because the discussion was not about technical issues at all, but rather choices that had been and needed to be made about urbanization and related issues. (Given that we were in Chongqing, China’s fastest developing metropolis, and we were talking to people working in construction-related businesses, urbanization absolutely made sense as the area of biggest concern).
As far as the future is concerned, one of the topics of conversation that came up was whether the Cultural Revolution could repeat itself, whether there could be another Mao era. It has been a long time since I have heard Mao Zedong’s name spoken so many times in such a short period. Everyone, except Xujun, was pretty adamant that this could not happen (I am also agnostic on this, though I was not adding my opinions). Why? Here I got a little lost but I believe the argument is basically that people have too much to lose, not something they perceived the last time around. A good point, and not one that is lost on me, but it does not dispel my fundamental belief that people can take almost anything for granted and once this happens they no longer perceive it as something they can lose. But I digress.
Later that day, at dinner, Bo Xilai again came up in conversation with another friend. Xujun’s sister asked if it was okay to talk about him and our host hushed her and said of course. I had to laugh at this, fortunately that went unnoticed. More good words, combined with significantly more reticence. He even gave Bo Xilai credit for getting freight to run by rail from Chongqing to Europe. A cool accomplishment, but I am not sure whose credit that really would be.
As I ponder this I think that the Chinese we were talking to do not believe there is any inherently right approach to either governance or economic policy. Be it Capital or The Wealth of Nations, they simply don’t believe. Absent such a framework there is only experience to build on. It is an empirical approach to governance: “If it aint broke, don’t fix it.” This is common in business, but perhaps antithetical to the percepts of the Founding Fathers of America. This might be the source of the disconnect they see between their reality and American criticism.
In any case, if they perceive that the problems are not systemic, but technical, then any advice offered by others damned well better be practical!
Posted by Xujun at 11:50 PM 4 comments: