Leftovers from Bo and Wang (Updated)

In my April trip to Chongqing, the following were still seen everywhere in the city. 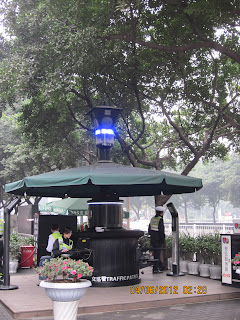 Each of these modern-equipped platforms cost 5 million Yuan, according to sources. And there is one at every big intersection in the city. To Bo Xilai's supporters, this is what makes them feel safer. Bo's dissenters, however, say this unnecessarily high-expense contributes to the city's huge fiscal deficit. A local journalist said that, in the summer, the platform's air conditioning runs fully 24 hours a day in the open air. Chongqing is notoriously hot. "Think how much electricity it wastes!" He said.

The disgrace of Bo Xilai and Wang Lijun makes the police platforms a difficult issue to deal with:  Get rid of them?  People who are used to them will protest. Keep them?  maintenance cost is very high.

[in translation]
"Now the city government has issued instructions to stop building any police platforms that have not been built, and to provide no more equipments for those that already exist.   When Bo was here he ordered every district to build police platforms, 5 million each, at the district's own cost. Many districts did not have the money but had to do it; no one dared to say 'No.'"

They don't have horses, but they wear "mounted-police uniforms" as locals call their white, sculptured outfits.  It is said that the uniform was designed by Wang Lijun, who loves luxurious accessories and holds many patents for their design. 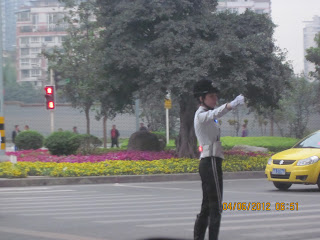 Those policewomen with gorgeous uniforms have become more an attractive part of the landscape than operational force. Passersby rubberneck and argue which of them are more beautiful or have better body curves.

The Power of Propaganda

"Five Chongqings" were Bo Xilai's signature slogans: "Safe Chongqing," "Livable Chongqing," "Forest Chongqing," "Healthy Chongqing," and "Convenient Chongqing."   For people who have no better access to information, the pervasive posters are all they are exposed to everyday about their leader's achievements.  Because there is nothing wrong with those concepts (their sincerity notwithstanding), not to mention the sheer quantity of posters, the post-Bo government will have a hard time removing the propaganda and Bo's image associated with it. 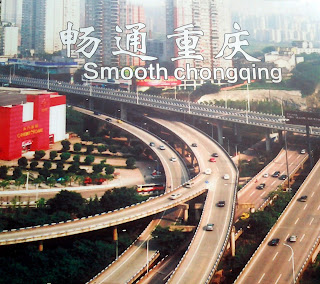 In early April, a few days after I arrived in Chongqing, a friend called to tell me about a construction project that Wang Lijun had started in November of last year – "The Wall of Police Heroes and Martyrs." The unfinished project, located at Gele Mountain's Yunding Peak (云顶峰) inside the Forest Park, is unknown to the public except for observant tourists who happen upon it and notice the construction signs.


Work on the site started around the time of Neil Heywood's alleged murder in Chongqing.  One can’t help but imagine that, right up to the moment of Heywood's death, Wang Lijun was still immersed in his police hero fantasy.  Local sources told me that Wang was a big fan of Hollywood police-hero movies and TV shows, and fancied himself as such.  He had also ordered a local writer, Huang Jiren, a friend from my youth, to put together a heroic biography for him. This police monument might have been more for himself than for his fallen comrades.

The project, undertaken by a construction company that has not been paid for their work so far, was not halted until the week of my visit to the site in mid-April, more than two months after Wang Lijun fled to the US consulate in Chengdu on February 6. Such a long delay makes one wonder how many matters are left from the Bo Xilai period that will have to be dealt with in the months and years ahead.

On April 15th, I went to the mountain with two friends; one of them was familiar with the project and upset about its destruction to the protected national forest park.  He said Wang Lijun had not obtained any permits from either the National Forestry Bureau or the Bureau of Parks and Woods, both of which oversee the forest park. Wang simply told the park that this was where he wanted to build the police monument.  "Who are we to resist his order?" A park manager is claimed to have said. 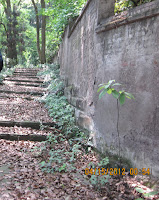 The planned monument comprises a platform of 1000 square meter and a series of 72 columns rising from the platform to the top of the mountain. The estimated cost is 5.97 million yuan, but some say it would likely cost ten times as much. If built, the project would effectively reshape the mountain peak.

The construction area was closed off with temporary walls and fences surrounding the mountain top, but we found a small gap between them and squeezed ourselves inside. We climbed up along leaf-covered mountain paths.

At the highest point on Yunding Peak stands a slab that says "The Origin Point of Chongqing's Coordinates." The symbolic significance of the point might have been the reason Wang Lijun chose the spot for his monument.

Going down from there, along a flight of stone steps, one could see a series of naked metal poles – intended to hold up the 72 columns – gradually spiraling into a huge pile of cement bags.  A tram track, exclusively built to transport construction materials for this project, runs down the hill to meet the road that construction vehicles can access. 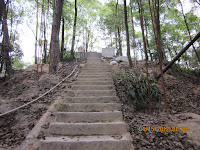 Staring at a pair of concrete bases, one of the friends said miserably, "Now what is the government going to do about it?  To let the monument continue to be built?  Or to deconstruct what is already laid?  What a big waste!" 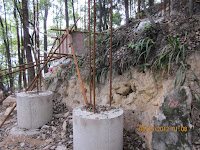 I wondered if the name of the monument was inspired by the "Wall of the Paris Commune." Wang Lijun must have really wanted his name to go down in history.  And it may, just not the way he thought.

The next day, I described the project to The Telegraph's Malcolm Moore, who also happened to be in Chongqing at the time.  He subsequently visited the site and mentioned it in a report on April 18th.
Posted by Xujun at 8:54 AM No comments:

Even before I reached the news kiosk on the street corner, the seller waved his hand and shouted, "No more newspapers!"  It was only mid-morning, and on each of the past few days I had easily bought papers at that spot when I passed it in the afternoon.

"Every paper is sold out?" I asked in disbelief.
"Yes, because every paper carries the news about Bo Xilai," the mid-aged man replied.  "Even Legal Daily is sold out."
"Have you sold out all your papers before?"  I said.
"Never," he said, "lots of leftovers every day."

I am in Chongqing this week to see my parents. My father, who is recovering from liver surgery, shares a hospital room with two other patients. Each weekday morning, the hospital distributes a free copy of Chongqing Morning News to every room on his floor. However the paper never reached my father's room today, a Wednesday. 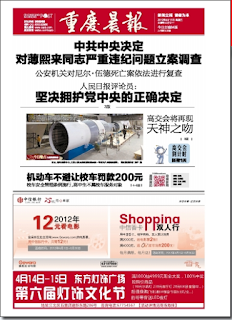 The woman in the bed next to my father's offered me the paper her husband had just brought her.  On top of the first page is the headline in large, bold font: "CPC Central Committee Decides to Investigate Comrade Bo Xilai's Serious Discipline Violations."  Under it, a separate line in much smaller font reads: "Police reinvestigate the death of Neil Heywood in accordance with the law."

"Are you surprised by the news?" I asked the woman, who looked to be in her late forties.
"Not surprised about Bo's treatment, but very surprised by the murder charge on his wife," she told me. She had never heard about Heywood before. "But we ordinary people don't care about politics that much.  We just care about our health and issues of daily life." Her husband nodded in agreement.

A while later I went to see my mother who was undergoing tests and observation in the gerontology wing of the same hospital.  At the nurses station on her floor, I saw young nurses talking in hushed tones stop in mid sentence as I passed by.  In my mother's room, the first words her roommate said to me were "Have you heard it?" by which she meant the involvement of Bo's wife in Heywood's death, not Bo’s removal from his party posts.

In the past week, since my arrival in Chongqing, nine out of ten people I spoke to had not heard of the Heywood case. The breaking of the news today apparently came as a shock.

Two days earlier, a friend who works as a mid-level cadre in a government-run enterprise said that the cadres in his unit have little mood to work. "All are waiting for the situation to get clearer," he said. "Nobody wants to follow the wrong line."

To many Chongqing residents, however, today's news seems to have just brought more confusion. As recently as last week, Chongqing was one of the banned internet words. Whether Party Central is really trying to achieve transparency by the sudden announcement today, or just using it as a new political tactic, the changes are too fast and too spotty to help in the never-ending chase for stability.
Posted by Xujun at 5:36 PM 1 comment: