My Block Booking for a Red Movie in Shanghai

[Note:  July 1st this year marks the 90th birthday of China's Communist Party. To celebrate it, "red" movies and TV shows are sweeping the country, to the extent that popular spy shows are banned May through July. The biggest film made especially for this occasion is "The Great Cause of Founding the Party" (《建党伟业》), which, in the China-made English ad, is translated as "Beginning of the Great Revival." Its release day was June 15th.  Here is the experience of an ordinary moviegoer on June 17th. -- Xujun]
[in translation， 中文原文附后]


(Shanghai, June 17) I went to a movie theater this afternoon, to give myself a break after a week of intense painting. A French movie festival was ongoing, but I would have to wait until evening to see it. The 3D "Kung Fu Panda" was on, but that kind of fad is for teens with high-tech addictions and would only daze me.
Coincidentally, the movie "The Great Cause of Founding the Party" (《建党伟业》) was about to start in 5 minutes. I bought the ticket, as if guided by a deity. Entering the screening room, I was stared at by the theater staff. They were whispering about me -- did they suspect my head was crushed by the door?
It turned out that,  in the whole screening room, with more than 400 seats, I was the only audience member, the only person who voluntarily dug into my own wallet to receive the "red" education. 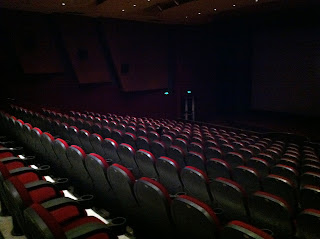 To be fair, the movie is well made. The plot is tight, some details are moving, and the actors are high quality.  But to put more than a hundred of the most famous stars into one movie, that seems like a practical joke.

Last time when "The Great Cause of Founding the Country" (《建国大业》) was made [in a similar fashion], many people went to theaters driven by the urge to "identify famous faces." From the beginning to the end, every time a face appeared on the screen, the hundreds of audience would roar in one voice: "Tang Guoqiang!" "Liu Yiwei!" "Liu Dehua!"  For two hours, all were engaged in identifying, shouting, and guessing; identifying, shouting, and guessing. No one knew what the movie was about.  To call it "great education for all people" is not as precise as "great entertainment for all people."  Perhaps this was the leaders' real goal after all? Educating by entertaining?
Now once again the great entertainment comes, but the masses are tired, they don't want to play anymore. They have left me alone doing the identification and guessing. I still don't understand why Zhao Benshan (赵本山) would wordlessly stand in Yuan Shikai's (袁世凯) shadow, with an expression half laughing half crying, and why Liu Yunlong (柳云龙), an actor I admire, would be half hiding in the left lower corner like a shadow. This was too distracting! I identified this face and then that, couldn't hear at all what Zhou Runfa (周润发) was saying. What was the director's motive? I couldn't enjoy the movie itself, I was only thinking: Why is Wang Xuebing (王学兵) so haggard? Who is playing Xiaofengxian (小凤仙), so beautiful?
The most far-off thing was that all the scenes of Tang Wei (汤唯) were removed. She was acting Mao Zedong's first love (not Yang Kaihui), but because she had been all nude in "Lust, Caution," someone thought she would tarnish the great man's image.  Yet Liu Ye (刘烨), the man who plays Mao himself, had starred in the most well-known homosexual film "Lan Yu" (《蓝宇》), with many shots of him all-nude in bed. If the same logic were used, wouldn't he tarnish Mao's image more directly? If we were back in the Cultural Revolution, the director would certainly be executed twice.
My only consolation is that, as a big screen lover, I enjoyed 135 minutes of exclusive block booking of the theater all by myself. I sat there straight to the last minute, until all names of the actors, workers, and musicians ascended beyond the screen.

For a moviegoer like me who's sick beyond cure, the staff member at the door was very sad. He slowly shook his head, like an owl.

After serving one and a half years in a Chongqing prison, former lawyer Li Zhuang returned home to Beijing earlier today.  His son, Li Yatong, posted on his micro-blog a photo of the family sitting in the airplane. I'm always happy to see a family reunion.

A little more than a month ago, Chongqing police had tried, but failed, to extend Li Zhuang's sentence with new charges. (For those of you who are not familiar with Li Zhuang's case, search keyword "Li Zhuang" on my blog and you'll find detailed posts, such as this one, following the trial last year.)

Li Yatong (middle), now in his third year of law school, has been firmly supportive of his father through the whole ordeal. His blog post "宣判" ("sentencing") was widely circulated on the Chinese internet last year.

While Li Zhuang is finally home, a Chongqing citizen, Fang Hong, was sent to labor reform for mocking Bo Xilai's handling of Li Zhuang. Fang also has a supportive and filial son, Fang Di, who hired a renowned lawyer, Yuan Yulai, for his father.  Yuan Yulai is reputed to be most interested in cases of "citizens suing officials." A couple of days ago Yuan wrote on his micro-blog that Fang Di and other family members have disappeared after being summoned by police to talk.

Fang Hong's arrest shocked me more than Li Zhuang's trial, for even the appearance of legal procedure is abandoned. It is a stark naked case of "speech crime." If I had had any illusions about Bo Xilai before, like the first time when I saw his handling of Chongqing's taxi strike in 2008, Fang Hong's arrest was the last straw to convince me Bo is a ruthless politician believing in Mao style iron-handed rule, and a political gambler who stakes all on a single throw.  I just don't know, 35 years after the Cultural Revolution ended, how far Bo can go in today's China.