Foreign Literature in China: Now and Then

In LARB:  In the Wake of Finnegan: A Q & A with Xujun Eberlein

This week’s Q & A is with the China-born and now Boston-based Xujun Eberlein, a short story writer, blogger, essayist, and contributor to LARB.

I contacted Xujun in part simply because I was curious to learn her reaction to two recent literary-minded and China-focused New York Times pieces. One focused on the surprisingly brisk sales in China of a book by James Joyce, while the other was a commentary by NPR Beijing bureau chief Louisa Lim on trends in censorship and the popularity of Chinese “officialdom novels.” Both brought Xujun to mind, since she has often reflected on the flow of books and ideas between China and the West and she has written an essay on the “officialdom novel” genre.

She was good enough to break up her Lunar New Year trip back to Chongqing to speak with me.

Jeff Wasserstrom: Do you have any thoughts on why Finnegans Wake might be selling so well in China?

Xujun Eberlein: I was curious about this myself. I’m in Chongqing for Chinese New Year and I went to the Xinhua Bookstore downtown on Saturday (February 9) to have a look at the book. A young staff member led me to the desk where the Chinese translation of Finnegans Wake (the yellow cover at the center of the above photo) was on display with other new and noteworthy books. As you may see from the photo, next to Finnegans Wake is the translation of polish novelist Henryk Sienkiewicz’s Quo Vadis, which has a supplementary band to note the author is a Nobel Laureate. The red cover on the right is a Chinese popular novel titled Love SMSs. I asked the young man how Finnegans Wake was selling there and he said “Not bad.” He noted that its sales were similar to One Hundred Years of Solitude and Love in the Time of Cholera. When asked what kind of readers were buying it, he said “mostly young people.” 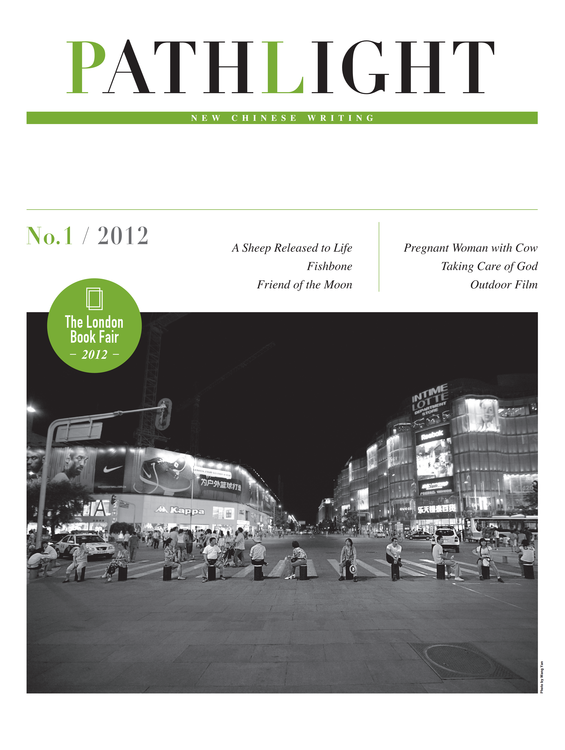 (Note:  This is a short story I translated for Pathlight issue No. 1, 2012, posted here with permission. I had not heard about author Jin Renshun before I got the assignment. Her writing is both beautiful and subtle, and I truly enjoyed translating the piece. I tried to be faithful to her original style and hope I've succeeded somewhat. – Xujun)

Jin Renshun:   Born in 1970 of Korean extraction, and now living in Changchun, Jin Renshun has published the novel Spring Fragrance, the short story collections Cold Front of Love, Moonlight Oh Moonlight, One Another, and The Glass Café, and the essay collections Like a Dream in Broad Daylight and Poisonous Beauties. Her work has been translated into Japanese, English. German and Korean. In 2010 she attended the University of Iowa’s International Writing Program.

Each day at dusk, from six to eight, the third table by the window was reserved for Kang Joon-Hyuk. Occasionally he brought friends – perhaps employees – with him, but mostly he came alone, magazine in hand, to read a few pages before the dishes were served. He and Chun Feng spoke every day, but nothing beyond her asking what he’d like and his ordering of dishes, followed by a few pleasantries of the “Thanks,” “You are welcome” sort.

One day Chun Feng forgot to put the “Reserved” sign on the table. By the time she realized her mistake, the table was occupied by two middle-aged women who chatted nonstop from the second they walked in. They ignored Chun Feng’s apologies and requests.

“This is where we’re sitting,” they said. “We’re not going anywhere.”

While another waitress handled their order, Chun Feng went outside to wait for Kang Joon-Hyuk.

“I’m really sorry,” she bowed to him, tears spilling forth. “It’s all my fault.”

“Did I cause you any trouble?” he said. “You stood in the wind for so long, for such a little thing! It’s me who should apologize.”

(Read the complete story here)
Posted by Xujun at 1:00 AM 3 comments:

Email ThisBlogThis!Share to TwitterShare to FacebookShare to Pinterest
Labels: translation

In my previous post, I distinguished two generations of Red Guards.  The first generation,  a disarray of factions who engaged in a great deal of violence from the summer of 1966 to 1968, were disbanded by the end of 1968 after the "Down to the Countryside" movement began on a large scale. This fact is pretty much clear.  The nuance I was trying to spell out is about the second generation, which came into being when middle schools resumed classes in the fall of 1969 after a three-year hiatus.  This time, the name "Red Guard" was borrowed by authorities for the official student organizations that, at first, served as a temporary substitute of the Communist Youth League which remained dormant then.

Apparently, what requires further clarification is exactly when the second generation "Red Guard" organizations began to disappear and when they eventually ceased to exist nationwide. From my memory, after I entered high school in the fall of 1971, the Communist Youth League revived, and we had no more "Red Guard" activities.  Last week in Chongqing, I asked a few old schoolmates, and they remembered it the same as I did.

However, the evening before I left Chongqing, I had dinner with some friends, and a couple of younger men told me that they had entered middle school and become "Red Guards" in 1975 (at the time, I was in the countryside receiving "reeducation" as a "zhi-qing").  I was surprised and subsequently searched baidu.com. I found two pieces of information that I wasn't previously aware of (or had forgotten about):

So, theoretically, the second generation "Red Guards" could have existed through August 1978.  On the other hand, I have found no citations suggesting their activities lasted beyond 1976, the year the Cultural Revolution ended.

In my discussion with the younger friends in Chongqing early this week, they believed that, by 1975, the "Red Guard" organizations were no longer mandatory for all schools. Thus, different schools might have done things differently, and differences might also have existed between high schools and middle schools.  This again reminds me the danger of generalization from one's own experience, something I try to be vigilant for but still sometimes let down my guard. Also, while I do not remember any Red Guard activities when I was in high school, it is possible that my memory serves me wrong.

As such I would like to invite my Chinese readers to help the fact-checking process:  if you were a secondary school student in China between 1971 and 1978, could you please let me know when was the last time you were aware of "Red Guard" activities in your school?  If you don't like to leave comments, you can email me.
Posted by Xujun at 10:55 AM No comments:

Email ThisBlogThis!Share to TwitterShare to FacebookShare to Pinterest
Labels: The Cultural Revolution

(posted from Chongqing via a proxy)

First, full disclosure:  I have not read Fu Ping's memoir, Bend, Not Break. The book, advertised as a "rags to riches" story, is not the kind that interests me, thus was not on my reading list. I had glanced at a few criticisms online in January, but did not read them carefully because I was busy writing.  In early February, before I left Boston, a friend got very angry at Fu after reading some articles about her book from a US-based Chinese website, and talked to me about it. She urged me to read those articles, but I did not get the time.  After I arrived in Chongqing to spend the Spring Festival with my parents, another cyber friend wrote and invited me to add an independent voice to the discussion.  But my father, who's 87, was hospitalized on Chinese New Year's eve, and caring for him took priority.

As my father's condition was improving, I checked out a few articles two days ago.   Among them, I found a Guardian report informative and balanced.  Sounds like Fu will have quite a number of things to explain to her readers.

To be fair, however,  I have to say Fu was not wrong in the following quote:


A photograph supplied to media by Fu shows her posing with a little red book, Mao badge and armband. Michel Bonnin of Tsinghua University and Prof Yin Hongbiao of Beijing University said it showed she was not disgraced as a "black element" at the time, as she claimed; Fu said it was common for children to be pictured pledging allegiance to Mao, "whether 'black' or 'red'".

As a child of "Capitalist Roader" parents, I wore a Mao badge and held the "little red book" during the Cultural Revolution. Every kid I knew did that, regardless of their family background.

In another photo that caused outrage, Fu and other students wear armbands before a Red Guard flag. I don't know when that photo was taken, but if Fu was born in 1958, she could only be 8 to 10 from 1966 to 1968, when the violent Red Guard movement was ongoing, and she herself would be too young to be one of them. If the photo was taken after she entered middle school, then it would be no earlier than 1969, which was the year middle schools resumed classes. By that time, the Red Guard factions involved in the early years of the CR no longer existed, and their members either had gone to the countryside, were in factories or had joined the army.

After middle schools reopened in 1969, however, another kind of "Red Guard" came into being, this time organized by school authorities. Because the Communist Youth League was still paralyzed at the time, the authorities needed another official student organization as a substitute, so the name "Red Guard" was borrowed. But this "Red Guard" is not that Red Guard; the two generations were completely different in nature despite the common name. I was one of those who entered middle school in 1969; almost all kids in my class were members of the new generation, official "Red Guard" organization, except one or two mischievous boys. I don't know about other schools, but we didn't have armbands.

After high schools reopened in the fall of 1971, the Communist Youth League resumed activities and the official "Red Guard" organization began to exit the stages of history. It is unclear when the aforementioned photo was taken.  I checked with a friend who has a digital copy of Fu's book and learned that the photo is undated. If it was taken in the late 1970s, then the armbands and the flag in it could have been some sort of props for performances.

So the question is: when was the photo taken?

I have a few more things to discuss but I'm running out of time right now. If you can read Chinese, please check out my post on Sina blog.