Have you ever heard a Chinese adage "Going too far is as bad as not going far enough" (过犹不及)?

people's attitude toward the campaign of crackdown on gangsters is changing. A little more than a month ago, when I called friends in , I heard genuine praise of Bo Xilai and the crackdown he led. Now people either speak hesitantly or refuse to give an opinion.

A few days ago an American journalist reporting on the crackdown wrote me from , asking for help finding local people to interview, so I called a few friends who I think might have something to say. One friend first could barely contain her discontent with the latest death sentences and then politely turned down my request. "We'd better not talk about this sensitive topic," she said. "We don't want to get any trouble." Her words surprised me because not long ago she had happily praised the crackdown.

The second friend said, "If speaking truthfully [about the crackdown], then everyone has psychological hindrance. If speaking untruthfully, then what's the point?" His conclusion: better not speak at all.

All those people are ordinary citizens not in any important position. I haven't seen this amount of fear for quite some time. In , this seemed to have begun with the Li Zhuang case, with which Bo Xilai's image is turning from that of an enlightened leader to a Maoist despot. He might be neither, but the campaign-style move is what frightens people, because it recalls bad memories of the Mao era. Only the youngsters who have no knowledge of (and are not told about) that time stay enthusiastic – and this is equally scary. 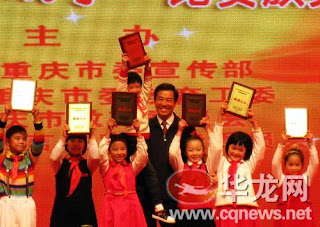 There is also a rumor that Bo Xilai might be out of favor with the central Party, because his name did not show up in a recent high-rank event where all other politbureau members appeared. This seems to me more a wish than concrete evidence.  Analyzing name appearances in the media was what people used during the Cultural Revolution to guess which direction the political wind would blow, much like technical analysis is used on Wall Street to guess which way the stock market will move. Neither is really predictable, but the return of such guesswork in politics may be another warning sign.
Posted by Xujun at 6:32 PM

This could be a good basis for an intrigue movie.

Very similar to something I heard yesterday when doing some research on the real estate market here in Liuzhou. "感觉事情有点不对劲. 不说了.我不想被牵扯进去." It seems I am hearing this opinion from many who are relatively comfortable and don't want to rock the boat for fear of reprisal. I could be wrong, in fact, hope hat I am.

Why aren't any of your friends even willing to give an anonymous quote? Is it because they are known as friends of yours, or if they give up good information it can be traced back to them?

Also, why do you think people fall for the love songs of reformers again and again? I am from a hugely corrupt, powerful American city, and we keep falling for those sirens again and again, even though we are really jaded. But since you have a literary bent, I am curious on your take on the seductiveness and nature (sometimes fake, sometimes false-flagged) of reformers like Bo Xilai.

Good questions. As far as I can see, average Americans are more interested in talking about politics than average Chinese, because "being indicted for words" happened a lot in Chinese history and is still happening now. This has taught ordinary people to stay away from political topics, and adopt a common attitude of "involving one more thing is not as good as involving one less." Perceiving risks, my friends apparently don't see any value for them to talk with a foreign reporter, anonymous or not.

I don't know if I can really answer your second question, but I think being hopeful is more dominant in human nature than being jaded. Were it not so the human race probably wouldn't have lasted to today. In China, with government corruption so common, an official like Bo Xilai who's perceived as uncorrupted, and even doing things about corruption, is easily welcomed and even aggrandized. Outside of Chongqing however, people are more likely to take a suspicious view. There is a Chinese saying that "you don't see the mountain because you are in the mountain." It takes distance to see things more clearly.