The Oct. 15 "Counter-Revolution" Incident in Chongqing

This is rather bizarre news to me: on October 15, 2009, a "national conference" was held in Wansheng, Chongqing, by the "Chinese Communist Party (Maoist)," or "中国共产党（毛泽东主义）"(简称"毛共"). All (34) attendees were arrested by police.

I read this in the latest issue of Remembrance, or <记忆>, a Chinese newsletter dedicated to Cultural Revolution (CR) research in China. The above news appeared in a brief report titled "Ten Things in 2009 Related to the CR," because "many of the participants in 'CCP (Maoist)' were Rebellion members during the CR." The CCP (Maoist) "only recognizes CCP's 9th and 10th Congresses that were held during the CR; they were arranging the so-called '11th CCP Congress'."

For the record, the actual CCP's latest Congress was the 17th, held in October 2007.

I searched the Chinese internet for media coverage, but found only the following two blog posts:

The first one is the same report I saw in Remembrance, but the blogger's name, Bai Lei, is different from the byline ("Bian Du") printed in the newsletter. It could be a pen name, I guess.

The second post appeared on a leftist website www.mzdsx.cn, which gives some details of the incident: the participants were "old comrades" and the leader's name was Ma Houzhi; more than 150 armed police suddenly attacked and shots were fired; 24 of the arrested participants were detained for 10 days, and the remaining ten were still in jail waiting to be sentenced. But you have to muddle through its overwhelming CR language to get the details. It's not a pleasant read, I tell you.

Note the term "counter-revolution incident" in the post's title: it does not refer to the conference; it refers to the police raid of the conference. The words sent a shiver through me, as if the Cultural Revolution was coming back all over again.

Who are those people? What are they up to?

When I asked, a friend who knew about this told me that the "CCP (Maoist)" has developed two "party groups" (党小组) in . All are old factory workers in their 60s- 70s, who had played small roles as Rebellion members during the CR. "You know how muddled those people's minds are?" My friend wrote, "They couldn't even say who 'Teacher Ma' was after being inducted by him into his party, and they just followed him to 'do revolution'! Truly laughable, yet sigh-worthy. On the other hand, it goes to show that Mao's way still has its places at the lower level of society."

Having spent my childhood and part of my youth during the CR, my first reaction to the news was that those people were insane. What for? But I really shouldn't be so surprised. A few years ago when I interviewed ex-Red Guard leaders, one of them, now in his 60s, told me that if he could make enough money he'd build a dissident party truly Marxist-Leninist. The unsaid words: the CCP today aren't really that. I couldn't tell if he was serious or it was just words to impress his audience (me). I'd thought it might be a reflection of nostalgia for his Red Guard youth, a sentiment many other ex-Red Guards displayed during my interviews. Now apparently someone else – some Teacher Ma – was carrying out the idea he was unable to. 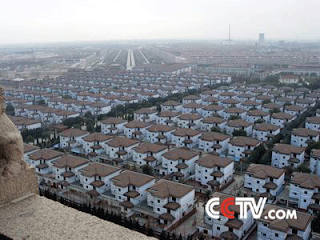 It was during those interviews in 2006 that I heard, for the first time, of a place called . The ex-Red Guard who wanted to build a dissident party told me is an example of true Communism and people there are having a great life. "You must go see it to know what I'm saying," he urged. He got me really curious, and I thought about making the trip. It turned out my younger sister, Maple, an avid traveler, had already visited at the time. If your purpose is to talk to the villagers, Maple told me, then forget about it. They are not allowed to talk to any outsiders. (That did sound like "true Communism" to me.) Though it was a bit far, I didn't completely give up on the idea of visiting until one day I saw a big photo of the , in which every house, relatively upscale as they all are, looks exactly the same.

In any case, as a writer I'm still interested in exploring the mentality and motivation of those "CCP (Maoist)" members. Meanwhile, another curious question comes to mind: don't those leftist people have the same human rights as the democratic dissidents do? If so, why haven't I seen any protests against their arrests from human rights groups?

"Mao's way still has its places at the lower levels of society"! Of course it does. Mao Zedong was a champion of the poor.

I also came across some references to this incident in Chongqing and reported on it in my blog. See http://mike-servethepeople.blogspot.com/2009/11/bo-xilai-and-chinas-maoist-party.html

Xujun, I expect one reason you haven't seen any protests from human rights groups about this is that, as you said, it's a pretty obscure incident at this point. Now, if it becomes more broadly known and there are no protests, then, yeah...one would wonder.

Thanks for the link, Mike. I've left a comment on your blog.

Lisa, you have a point. Let's wait and see.