After serving eight years as a med tech in the Air Force, Kim Chinquee received an MA from the , where she studied with Rick Barthelme, Steve Barthelme, and Mary Robison. She also holds an M.F.A. in Creative Writing from the , Urbana-Champaign. A Pushcart Prize winner, she teaches creative writing at . Her collection of flash fiction, Oh Baby, will be published in March 2008 by Ravenna Press. 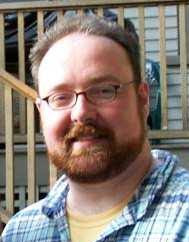 Rusty Barnes grew up in rural northern , and received his M.F.A. from . After editing fiction for the Beacon Street Review (now Redivider) and Zoetrope All-Story Extra, he co-founded Night Train. A book of his flash fiction, Breaking it Down, was published by Sunnyoutside Press in November 2007.

Q. Welcome on stage, Kim and Rusty. At AWP early this year, Brigid Hughes, the editor of A Public Space, asked me what flash fiction was. I thought I knew, however I could not come up with a quick answer. So I'm passing this question to you now: what's your definition for it?

Kim C.: Thanks. In September, I gave a presentation and reading on flash fiction, and I believe my definition then was something like: a brief emotion rendered on the page, like a photograph, or snapshot. Though now I believe that definition is a bit too elementary. I've been doing a lot of research lately on the prose poem, and trying to read as many prose poems as possible. I'd like to read everything there is about the prose poem and flash fiction before even accurately trying to define them.

Rusty B.: I think flash fiction can be a story under 1500 words, as often language-based as plot-based, which deals with the impact of a moment or a couple moments as opposed to a full-length story which attempts to cover more material.

Kim C.: I'm beginning to believe that flash fiction is simply another name for prose poetry, although the term prose poetry has been around a lot longer than flash fiction. Baudelaire published a series of nine poems in 1861, the first to be named prose poems, and his collection Paris Spleen reads to me like a collection of flash fiction. In C.W. Truesdale's Introduction of The Party Train: A Collection of North American Prose Poetry, he identifies seven different types of prose poems: The Object Poem, The Surreal Narrative, The "Straight" Narrative, The Character Poem, The Landscape or Place Poem, The Meditative Poem, and the "Hyperbolic" or "Exaggerated" Poem. I was able to relate to each and could adequately categorize my own flash fiction based on these criteria. Perhaps flash fiction is more "story-like," with a bigger focus on plot, yet maybe not.

It's hard for me to tell, when writing my own pieces what to call them exactly. I think my flash fictions are becoming shorter, and lately I've been writing one-paragraph pieces. So, do I call them prose poems? By default, I call them flash fictions, though they could probably be either. I'm teaching a seminar next semester, focusing on flash fiction; I found that there was no way to teach the class properly without discussing prose poetry, so I have incorporated prose poetry into the course, and lately I've been reading everything I can about flash fiction and prose poetry, and I have stacks of material to work through, thanks to the generosity of Robert Alexander, a prose poet himself, who wrote his dissertation on the prose poem in 1982 at the University of Wisconsin, Milwaukee. And of course, there are the anthologies on flash fiction by James Thomas and Robert Shapard, which I am a fan of, and discuss regularly in the classes I teach. I hope to have a clearer sense of prose poetry and flash fiction as I read more. But to put it simply, to me flash fiction and prose poetry go hand-in-hand.

Rusty B.: If I can be forgiven, and I hope I can, for talking about the work of my Night Train comrade and friend Cami Park, I think her piece from SmokeLong Quarterly, 'On Mondays Francesca Takes the Stairs' is a nice example of what I mean, even if I wasn't precise enough in my original phrasing. The entire piece is one long sentence that works so well in its cumulative effect because of the near-perfect placement of its commas. She begins the story with the quick phrase and the semicolon, and then each phrase after that turns in on itself, adding what I call forward-momentum details (since it's really not appropriate to talk about plot-points in a story like this) that augment our understanding of Francesca and the very simple, but wondrous in its implications, progression up these stairs. It's a near-perfect illustration of a moment, which is something that impressive flash does as well as or perhaps better than a traditional story. Another good example of what I mean comes from Night Train's Firebox Fiction archives: Lydia Copeland's 'In the Air a Shining Heart.'

And to get back to the question, in my own circuitous way, I think flash tends to come in two or three distinct forms: the traditionally-shaped (but shorter) story, like many of mine; the open-ended moment-illustration, which I think most shorter flash--less than 500 words, maybe--tends toward; and the sort of pungent minimalism affected by Lydia Davis and Diane Williams. Which is a long way of weaseling out of the question, I guess. Okay--here goes. I think flash fiction can be more language-based and in many cases I wish more of it was language-based. I think the work in the anthology PP/FF, from Starcherone Books, illustrates the various methods of the form better than I can explain, while a number of other equally excellent anthologies like the well known Sudden Fiction and Flash Fiction anthologies approach the work from a more traditional view.

Q. Great stuff from both of you – very educational and thought-provoking. I wish we had more time to discuss this! My next question for you is, what do you like about writing flash compared to longer stories?

Kim C.: In writing flash fiction I'm able to indulge more in the moment, or scene, the image or circumstance, where as when I'm writing longer stories, I tend to think more about the bigger picture.

Rusty B.: It's incredibly gratifying to finish something within an hour or a few hours and either polish it for publication afterward or let it germinate into something longer. My life is such that my writing often comes in hour or two hour bursts 3-4 times per week if I'm lucky, and it's helpful for my psyche to feel as if I've completed something that might be publishable within that very limited time frame. Still, it's an odd week that goes by where I don't write one or two or three flashes, and usually at least one of those is something I'm interested in expanding into longer material. Writing flash is the way I work now, and I like it.

Q. In light of the above, what kind of readership is flash fiction aimed at?

Kim C.: I like to think it's aimed at everyone and anyone.

Rusty B.: People with short attention spans, people who spend a lot of time on their computers, people impatient with plot and tradition, people who don’t think they have time to read.

Q. Which is the best piece of your flash and why? Where was it published?

Kim C.: That changes in my eye from moment to moment. Perhaps my most successful is "Formation," which was published in the 2005 NOON and won a Pushcart. A lot of time I think my best piece is the one I'm currently working on, though I realize that after I get some distance from it, this is not usually the case. Like any writer, I tend to favor whatever I'm focusing my energy on. Maybe some of my best work appears in NOON; Diane Williams has had quite an influence on my work. She's a great editor--careful and precise, which I am grateful for. Also, I have a lot of work in elimae, which is edited by Cooper Renner, who is another one of my favorite editors. He's currently editing my book, Oh Baby.

Rusty B.: I have no idea what the best one is. I'm most proud of a flash I published in SmokeLong Quarterly, "Love & Murder," because it's a key scene in the novel I've been writing off and on for four years, and it feels nearly exactly right to me in both tone and character, and every time I feel like abandoning even the idea of a novel—I've failed miserably at three before this one—I come back to that story and say to myself 'no—don't let these people go—finish it!'

Q. How do you relate flash fiction to video games?

Kim C.: Yikes. I really don't. The thought of video games gives me a headache—the noise and stimulation, seems like the polar opposite of flash fiction to me. Though I don't really know much about video games.

Rusty B.: I love both of them, but my hand-eye coordination is much better suited to flash fiction. Having said that, though, video games allow me to fulfill my dream of suiting up and throwing down a nasty dunk in Shaquille O'Neal's grill.

Q. Aha, here we see a real difference between you two. Now, what's your advice to other writers who want to try flash fiction?

Kim C.: Read anthologies and literary journals that publish flash fiction and prose poetry. Study them. Think less about plot--if you're writing from the heart, the piece will come alive through your choice of detail, and the language.

Rusty B.: Write a lot of it. Write to prompts, write without prompts. At one point I wrote three flashes a week on a schedule, every week for a year. Do that or more. Read it, as much as you can find, online and off, good and bad. Send it out and get it back, I don’t know—all this advice is dumb, basic. Make sure you tell everyone in your life that every moment of every story you write is true: it'll make your family reunions and interpersonal lives much more exciting.

A mini master class. Thank you!

Super interview! Thank you all.

I think their discussion illustrates the experimental nature of flash. It can be this, and it can be that. For me, those I like most are kind of an essence of an idea that lingers. I was also pleased to hear their reaction to flash being like a videogame. I don't believe flash is any more suited for readers with a short attention span than poetry. Might even be more suited for people who like to be left thinking about something. I think it's perfectly suited--like Rusty said--for writers who have only bursts of time, maybe a few hours at a stretch. I love it, myself, because it forces my ideas into themselves to somewhere around the heart of the matter. From there, who knows? Maybe that's where they feel best. But for those that don't, they can open up more seamlessly into whatever they turn out to be. Very interesting discussion--much more enlightening, I thought, than a definition aimed at pigeon-holing such a terrific artistic concept.

Thanks for reading and commenting, everyone! And Pat, you made some very good point.