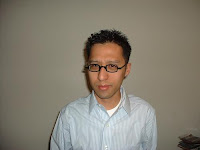 Viet Dinh comes from a Vietnamese immigrant family. He holds a MFA from the University of Houston and teaches English composition at the University of Delaware. He was the fiction editor for Gulf Coast and now an associate editor for Night Train. A widely published short story writer, he is currently trying to find a publisher for his collection, I (Heart) Disaster.

Jim Tomlinson was born and raised in a small town in northern Illinois . He lives and writes in rural Kentucky. A realistic writer, his debut collection, Things Kept, Things Left Behind, won the 2006 Iowa Short Fiction Award.

We learned yesterday that both Jim and Viet are among the 2008 NEA Literature Fellowship winners.

Q. Congratulations, Jim and Viet! Could you describe the moment when the phone call came from NEA in November? Who called you? What did he/she say? What was your reaction and response?

Jim T.: Thanks, Xujun! Chloey Accardi, Division Assistant in the Grants Office, phoned and told me the news on November 15th. I was stunned. That much I remember. Most of what she said after that is a blur. I know she asked for a bio, a photo, and permission to use an excerpt from my work sample on the NEA Writers Corner website. She also said to keep the news quiet until the December 4th press release. I told my wife, of course, and two or three close friends, but no one else.

Viet D.: I didn't receive my call until late November -- I was called by a nice man who wanted my social security number, so I was suspicious that this was a phishing scheme. But, since my credit rating is nil anyway, I threw caution to the wind. Needless to say, I was flabbergasted to discover that this was the real thing. My previous plans for the day: go to the DMV. My revised plans: have a hamburger and take a nap at home.

Q. LOL! Now, which story did you submit to NEA as a writing sample? Where was it published? In which way is the story representative of your writing?

Jim T.: I sent “First Husband, First Wife,” which appeared in Five Points and leads off my short story collection, Things Kept, Things Left Behind. Most of my stories are about characters and relationships that appear to be one thing but then unfold new layers. I think that’s especially true of Jerry and Cheryl in “FHFW.”

Viet D.: I submitted "Substitues," which appears in the most recent issue of Five Points. I'm not sure this story is representative of my writing as a whole -- my style and subject matter vary vastly from story to story. But I felt it was the best story I had on hand at the moment, so off it went.

Q. Both in Five Points! Isn't that an interesting coincidence.
In one sentence, tell us what sets you apart from other contemporary fiction writers in America.

Jim T.: I’m just another fish in this river, like every writer I know.

Jim T.: Living expenses, mundane things, too many to list. Research trips to southern Indiana and western Kentucky, certainly. Possibly central Illinois, too. These are settings for my novel-in-progress.

Viet D.: I plan to upgrade my computer, take a semester off from feeding knowledge to the animals, and perhaps travel to India, where my novel will be set.

Q. If the grant were for $25 million is there anything you would change about what you are trying to write?

Jim T.: Interesting question, Xujun. I want to say I’d be trying to write the same kinds of things. I also want to say that that kind of money wouldn’t be a ruinous thing. But it just might be.

Viet D.: Not really. I'd just be writing in much more luxurious surroundings. Attended to by servants. And unpaid college interns who will do my typing for me. Plus, perhaps, a carousel drawn by a live donkey.

Q. What's your advice to other writers who want to apply for the NEA grants?

Jim T.: Send your very best work as a work sample. Fill out the paperwork neatly. Send it off, and then try to forget about it.

Viet D.: The same advice I'd give to anyone submitting their work anywhere: give it your all, give it your best, have an accountant deduct the postage from your taxes later in the year. #
Posted by Xujun at 10:23 AM

Wonderful interview, Xujun! Both Jim and Viet are hugely talented writers and very deserving of this honor.

Wow, how did I miss this big and fabulous news? CONGRATS Viet and Jim. Can't think of more deserving writers. Bravo!!! And thanks Xujun for this wonderful interview! Well done.

Great interview--and how interesting the Five Points thing! Good on you for teasing that information out.

Great interviews! Thanks and congratulations to Jim and Viet.

Great interview!!! You guys are so humble and smart with your answers. I bet Five Points would like to know about this...

I loved this interview. Jim and Viet are so modest and talented. A charming combination. Congratulations to them, and thanks for the interview, Xujun!

Great interview, Xujun! Besides being amazing writers, Jim and Viet seem to have a fine stand-up comedy routine.

I think we all agree that both of these dudes really deserve the grants. I guess that's the best way to get an NEA grant...write fiction that deserves it.

And submit it to Five Points first.

I'm with Katrina--Five Points would be stoked to learn about this if they hadn't already.

And submit it to Five Points first. Hehe, that's a great tip. Someone should tell Five Points this. :-)

And guys and gals, thanks for coming by! I'm sure Jim and Viet appreciate very much your comments.

Congrats, Jim and Viet! and thanks so much, Xujun, for including my novels in your virtual bookstore!

reat interviews. Laughing here! I'm wondering if Viet ever got to the DMV? He might need a license to collect the award money! And Jim - your award might help you travel a bit farther than the next state, by golly!

Congratulations to you both.

Lovely interview and wow, what a lovely grant. I want to be American. I want to publish in Five Points. I want to be a genius. But as for now, congratulations to these well-deserved writers. Make the best of it!
Cheers,
Avital

Congratulations to both! What a feat.
Viet makes me laugh.
Great interview, XJ.