"They Produce Lies, We Pretend to Believe"

— New Weekly's interview with Wu Si
(Note: The governmental behavior described by Wu Si in this interview seems quite universal. Communism not required.  I think Wu Si has many good insights, though his confidence in democracy seems too high. There's no shortage of lies in , for instance. — Xujun)
[in translation] 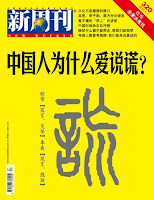 Wu Si has been the executive editor, co-director and chief editor of the Yanhuang Chunqiu magazine. His books, Hidden Rules: the Real Game in Chinese History,  and Blood Remuneration Law: The Survival Game in Chinese History, have widespread influence. He is dubbed "father of the hidden-rule concept." (Interviewer: Hu Jiujiu)
There Is a State System that Makes It Easy to Produce Lies
New Weekly: Lao Tzu said, "With the emergence of intelligence, come big falsehoods." I wonder if it's alright to understand "falsehoods" here as "lies"?
Wu Si: Yes. Either "hypocrites," or "lies," alright.
New Weekly:  This is a question of historical view: what history is true?
Wu Si: The fact is, there is a kind of state system that makes it extremely easy to produce lies, manufacture lies, under which lying becomes legitimate and cost-effective. Look at this system in our history: an emperor, a bunch of bureaucrats under him, facing a country of peasants, peasants with no open information channels. To the person who fights for state power, who rules the country, whether Qin Shihuang, Zhu Yuanzhang, or Liu Bang, the problem he must solve is how to rule the country. The highest ruler has two options: one is using naked violence, compulsion; another is using persuasive power, benevolent governance. The two options also have to be kept in proportion. Ruling by violence alone is fragile, and will not last, or in other words, the long-term gains are not looking good. Thus the partial adaptation of Confucian ways, to convince you, exhort you, let you approve by heart.
New Weekly: Then this becomes a set of lies by the ruler.
Wu Si: This is a set of theories. If the ruler truly follows the theory, then it is not a lie, or at least the proportion of lying is low. If he does not follow the theory, we can say it is a lie.
So, will he follow the theory? He definitely won't, or not completely. On one hand he requires you to follow, on the other hand he himself does not completely follow. For example, "the sovereign be benevolent, the subjects be loyal," "the father be kind, the son be filial," "the husband be righteous, the wife be obedient." My duties are the rights for you to enjoy, and your duties are the rights for me to enjoy. We complement each other.  Even if your rights are bigger than mine, my duties are more than yours, since you are the sovereign and I'm the subject, your responsibility is also bigger. I can accept that. This is the Confucian "three cardinal guides and five constant virtues," and it sounds acceptable.
In reality however, the more powerful side does not want to be restrained, has difficulty obeying, is very easily corrupted, and often is neither benevolent nor kind. Benevolent rulers are rare in history; the proportion is very low. But, lack of benevolence does not permit disloyalty. Therefore [the ruler] can’t rely too heavily on reasoning.  He needs to mix the kingly way with Taoism, Confucian outside Legalist inside. On the outside he is Confucian, talking soundly, persuasive, fastidious about standards in all aspects. What actually happens is that he lets you follow the rules, he doesn't. Further, he doesn’t let you know he’s not benevolent, instead he publicizes his benevolence. If anyone dares to object, no more words, simply destroy him. The ruler carries penal laws and raw power.
Looking at such a state system, persuasive power is very important. It can lower ruling costs, and increase ruling gains. It can form inner constraints in people as the ruled. Not only that, it can bring to the whole system a sacred, magnificent sense.   This persuasive power is so important, naturally it can't be given up.


In particular, how are cost and benefit calculated? The benefit is to have the subjects and people willingly follow rules and norms. The cost is that the ruler himself has to follow the rules, setting an example. Benevolent governing has big benefits, ruling by persuasion, by simply moving lips to make peace in half of the world, such benefits one should completely receive. But the cost of setting an example is very high, one shouldn't pay fully, but should make it look like full payment, even over payment, meanwhile the truth can't be exposed. So the cost of setting an example is transformed into secretly tidying up a few people, sealing the throats of opponents. As to those who lick the ruler's boots, no shortage of them, they come automatically without being called. Under such a state system lying has a high benefit and a low cost. Starting from the top, large scale lying is inevitably going to happen.


Formation of a Lying Community

Wu Si: We have to limit this in politics. On domestic politics, I only speak truth. If I can't speak truth, I don't lie. If you are talking about daily life stuff, for example when [your parents] asking whether you are getting better from illness, even if you are still sick, you don't want to make your parents worry, you just say yes. Such so-called white lies are unavoidable.

[1] Qian Xuesen (1911-2009), a leading Chinese physicist in the 20th century, published an article in 1958 in People's Daily claiming that scientific calculation shows crops yield can increase more than tenfold. That article is now viewed by some as a significant contribution to the calamity of the Great Leap Forward. — Xujun
Posted by Xujun at 1:06 PM

Excellent, thank you so much for this translation XuJun.

Fascinating interview, I had not heard the anecdote about Qian Xuesen and the supposed yield-per-mu, and Mao's cynical exploitation of the statement. The interview seems rather frank for a mainland magazine. Is this tone typical of Xin Zhou Kan? I'll have to pay more attention to it. Thanks for doing the translation, and I love your blog.

You very perceptively point out in your note that Wu Si speaks universally, not just for China. We all deceive and self-deceive and that final example about not wanting to worry your parents is a good one. The more interesting question is about just how close to the surface this behaviour lies. Do we/they know that we're doing it?

It's great that you're reading "Country Driving" (Peter Hessler) because he starts to track those ordinary lives and starts to learn about those habits, just how trapped people are within them and how embedded they are within a wider system.

@David Moser: I'm actually not that familiar with Xin Zhoukan. This interview caught my attention because Wu Si is the editor of Yanhuang Chunqiu, a magazine I really like. I'd say Yanhuang Chunqiu's tone is often frank. Have you read the magazine?

Thank you Xujun for this translation.

Regarding the "universality" of Wu Si's observations of government behavior, what he describes seems quite similar to Niccolo Machiavelli's observations about lying and political power almost 5 centuries earlier:

"EVERY one admits how praiseworthy it is in a prince to keep faith, and to live with integrity and not with craft. Nevertheless our experience has been that those princes who have done great things have held good faith of little account, and have known how to circumvent the intellect of men by craft, and in the end have overcome those who have relied on their word....

Therefore a wise lord cannot, nor ought he to, keep faith when such observance may be turned against him, and when the reasons that caused him to pledge it exist no longer. If men were entirely good this precept would not hold, but because they are bad, and will not keep faith with you, you too are not bound to observe it with them. ....

But it is necessary to know well how to disguise this characteristic, and to be a great pretender and dissembler; and men are so simple, and so subject to present necessities, that he who seeks to deceive will always find someone who will allow himself to be deceived....

Therefore it is unnecessary for a prince to have all the good qualities I have enumerated, but it is very necessary to appear to have them.

And I shall dare to say this also, that to have them and always to observe them is injurious, and that to appear to have them is useful; to appear merciful, faithful, humane, religious, upright, and to be so, but with a mind so framed that should you require not to be so, you may be able and know how to change to the opposite....

For this reason a prince ought to take care that he never lets anything slip from his lips that is not replete with the above-named five qualities, that he may appear to him who sees and hears him altogether merciful, faithful, humane, upright, and religious.

There is nothing more necessary to appear to have than this last quality, inasmuch as men judge generally more by the eye than by the hand, because it belongs to everybody to see you, to few to come in touch with you. Every one sees what you appear to be, few really know what you are, and those few dare not oppose themselves to the opinion of the many, who have the majesty of the state to defend them; and in the actions of all men, and especially of princes, which it is not prudent to challenge, one judges by the result."