Standing Water: "Not the Town’s Problem"

It was sunny while I was in Scotland in mid March. Everyone said it always rained in Edinburgh, but not on me. Only when Bob phoned from home that I heard about rain, and lots of it. He was in the basement of our house, pumping out water everyday.

Now it is April 1st, and the water is there again, and more. We are not alone, we have lots of neighbors with flooded basements and flooded yards, roads are closed, dams have burst. Even our tax filing deadline has been extended because of the flood. We just keep pumping and getting soaked.

Yesterday, the skies opened and it was possible to go outside. In our yard, the standing water formed little lakes (see photo below, taken today). Bob tried to figure out where it spread to. Hopping on his bike, he took a ride to the street corner across from our yard. There he found a little stream running down a road, through a culvert, and into a forest. Following the road, it became clear where the stream wanted to go: a massive wetland on the other side of Rt. 30. But the highway blocked that and the water had no place to go. So the water spills up onto the road and also back to our yard, all the way to our basement. 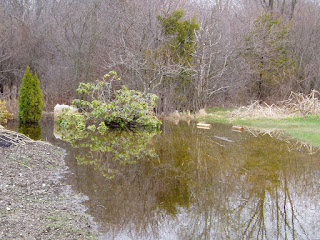 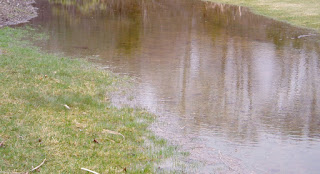 I finally called our town's Conservation Department yesterday, hoping they would know about streams and, in our case, unwanted little lakes. This was the first time I've ever called the town for help during our 12 years living here. The nice lady there couldn't really understand my question, but she called back in the afternoon, directing us to the Highway Department.

So, here's a rough rendition of Bob's conversation with the Highway Department this morning:

Bob: "There is a stream that runs through a culvert then hits route 30, thus the water on the road. It looks like the highway is blocking the water flow. Could you do something about it?"

Highway Department: "No. The water runs into a retaining area and that is overflowing."

Highway Department: "Not the town’s problem."

Bob: “So who is responsible?”

Highway Department: “Nobody, it is what it is.”

Bob: “Would it be possible to pump the water across the highway?”

I would not be surprised if I heard a bureaucrat talking like this in China. But this is Massachusetts, USA. I guess my two countries have more in common than I think.

Update:  Apparently Obama was in our neighborhood today for the flood.
Posted by Xujun at 5:05 PM

Email ThisBlogThis!Share to TwitterShare to FacebookShare to Pinterest
Labels: America and Americans, personal

I'm really not surprised by the conversation--it's the wonder of bureaucracy. And I know you got hit worse by the storms than we did, which is surprising considering how often this city floods.