It was reported that, early this month, the Ba Manzi Tomb in was reopened to the public ("for free"), after being closed for more than a decade.  This news bears certain intimacy to me because, I suspect, Ba Manzi's blood once steeped deep in my mother's veins.
During China's Warring State Period (475-221BC), Ba Manzi was a general commanding the Ba Kingdom's army. This small kingdom was caught in a civil strife that its tiny army was unable to quell. Manzi turned for help to , a much bigger neighboring kingdom, and offered three towns to restore order. ’s army came to Ba and quelled the internecine war, at which point Chu’s king sent an envoy to receive the three promised towns. Manzi said to the envoy, “My head may be given, our land may not. Because I can’t give you our land, to keep my promise I’ll give you my head.” He drew out his sword and cut off his own head. All were shocked. The envoy brought Ba Manzi’s head back to the King of Chu. The king was so moved that he held a grand burial for the head, while the gave an equally grand burial to the body. The three towns of Ba stayed intact.
Thus Ba Manzi's head and body were buried in separate locations. However, Huayang Guozhi (《华阳国志》), the ancient book that recorded the story, does not say exactly where. Experts say the Ba Manzi Tomb in does not contain his remains; it could contain just clothing, or could be empty. Why such an empty tomb is in , who built it and when, is one of numerous puzzles in 's history.
My mother shares the hometown, now the Zhong County (忠县), with Ba Manzi. The place, a few hundred miles downstream from , was the ancestral land of the Ba tribe that mysteriously vanished some two thousand years ago. It was an improbable chance of literacy that brought my mother, the daughter and only surviving child of poor peasants, to learn the story of Ba Manzi at age thirteen. For two thousand years until the 1949 liberation, in each spring, on the third day of the third moon of the Old Calendar, held a grand temple fair called “third moon festival” to commemorate Ba Manzi.  As a middle school student in the early 1940s, my mother danced and sang and paraded in each year’s “third moon festive." Since then, Ba Manzi's patriotic, self-sacrificing heroism has never lost its vitality for her. I suspect her drive to join the underground Communists before the liberation and risk her life for a cause that later proved vain, that brought her life-long pain, had something to do with Ba Manzi's spirit. On the other hand, her illiterate mother, my grandma who we called Gaga, who knew nothing of heroes beyond cats, water buffaloes and mythical rhinoceroses, lived a relatively more contented life of 95 years. Gaga was born in the same year as Mao – 1893, but out-lived Mao for a full cycle of twelve Earthly Branch years.
My mother is sure that her ancestors were native inhabitants ever since Pangu separated the sky and earth from chaos, because in her youth she had read her family genealogical chart. "It contains eight generations of my ancestors, all in village," she once told me. When the Chinese say "eight generations," it does not mean eight; it means all. If this is the case, then I'm fairly confident my mother is a descendant of the Ba tribe, the valiant, dance-love ancients who forged bronze swords along the Yangtze and buried their dead in boat-coffins hanging on high cliffs above the gorges.
In February 2009, I revisited the Ba Manzi Tomb in . It had become a forgotten, dilapidated, dark basement of the commercial world. Though its name was on the tourist map, few residents along the street knew about its exact location, and I had to ask many people to eventually find its obscured entrance. Down a flight of wide stone steps piled with furniture supplies, the tomb front had turned into an unauthorized storage room for a retail store. Another, fancier furniture store sat on top of the tomb. I asked a store worker if he worried about the government's punishment for occupying the site of a cultural relic, he said no, during the several years he worked next door to the tomb, he had seen occasional tourists, even foreigners, but no government people. That's why they had unscrupulously piled their furniture supplies, blocking the sight of it. 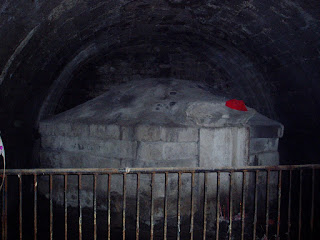 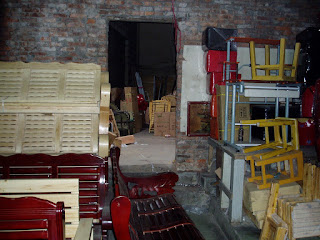 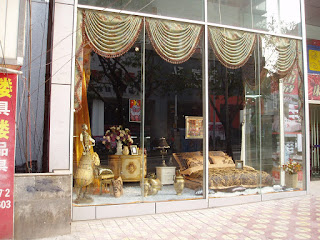 on the tomb's top (Feb. 2009)
Now, why did the government suddenly remember it? Is it because Bo Xilai needed another teachable instrument for heroism and patriotism?
That's beyond me at this moment, as I'm fascinated by something else: it just occurred to me that my father's lineage has an almost opposite nature, almost anti-heroism, from that of my mother's.
The Chinese say marriage is the combination of yin and yang, in which the woman possesses the softness of yin and the man the power of yang.  In my upbringing, however, it had always seemed to us children that our mother was the yang element. This is to say, while we grew up, the family's roof had been pillared by our mother, not father. I wonder if my father's soft personality has to do with his ancient heritage.
Next time I'll tell you the fascinating story of my father's ancestry, one that he himself might not be aware of.
Posted by Xujun at 9:06 AM

Glad to see others are interested in Ba Manzi.

The tomb was still closed when I visited in June 2010, but (comparing with your photo) has been heavily restored. Should be open now.

Still in a furniture warehouse though!

Hi David, I'm curious: how did you get interested in Ba Manzi?

I'm just interested in the history of Southwestern China

By the way, I'm sure you know, but there's also a memorial hall to Ba Manzi inside the pagoda at Shibaozhai, on the Yangzi near Zhongxian.

My mother was from Zhongxian, so I've heard about it, but haven't seen it myself. Isn't Shibaozhai drowned because of the Three Gorges Dam?

By the way, do you have a blog or website? Have you written about Southwestern China's history? It is a unique history!

Hello again Xujun,
In my search for Chongqing's surprising bits of history, you remain one of the more interesting sources of information. I'm now working to make more of these less-well known but very interesting facts about CQ known amongst the expat community so will post a link to this for people to come read about your personal connection.

Hi Penny, nice to "see" you here! Are you on Facebook? We can connect there.