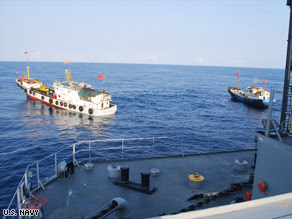 There's something hilarious in the Pentagon's description of Chinese ships "harassing" a surveillance (spy?) ship: "Impeccable sprayed its fire hoses at one of the vessels in order to protect itself. The Chinese crewmembers disrobed to their underwear and continued closing to within 25 feet."Adding to the amusement is that each Chinese language website gives a different translation for the ship name "Impeccable." To cite just a few:无畏号

Gosh, the realm of name translation to Chinese is surely out of control.

A side note: CNN reports that "there were no stories about the incident in Chinese media." However the website of China's official magazine Global Times has a report that calls Pentagon's protest "hasty" and "fishy," because the news broke at a sensitive period of the two countries' military exchange. It also says the harassment claim uses lame logic, given Impeccable's location. However, the Chinese article does not mention the "disrobe" part of the Pentagon statement. Their loss, no 完美号 humor for them.

Email ThisBlogThis!Share to TwitterShare to FacebookShare to Pinterest
Labels: America and Americans, China and Chinese, translation

I really liked one quote stating that the US was infringing on China's special economic zone...in the ocean??

Could it be these guys were out for a joy ride?

For years, editors have been telling their reporters, it's not a story unless it has conflict. Interesting that fiction writers get the same advice. Over time, the news media has become so over-reactive to conflict that it seems this "literary" desire is now driving international policy.

Re: "Could it be these guys were out for a joy ride?"

Jerry, I nearly thought that as well. :-)

heur...yes, it is in the Special economic Zone, SEZ is 200 nautical miles off the shoreline. Check Wiki.

I guess the correct terminology is economic exclusion zone. But it doesn't make much difference in Chinese language.

One of this days this funny games are going to end in a tragic event, which as usual will occur at the worst moment.
I was born in a city with long sea tradition and some of the things I have read from CH behavior in the last riff raff with the US Navy are a big NO NO in seamanship.
Also have pilot license, and when I read the complains about a 4 engine aircraft chasing a jet fighter.... what the heck!
There is a difference between patriotism, nationalism and xenophobia. PLA officers should try to get cooler heads in commanding posts.

To anonymous writing in Chines asking for translation.
I use Babelfish to be able to read posts in Chinese. Translation is quite good.
It may help in the opposite way.
Sometimes the translation looks funny but do not need too proficient in English to get the real meaning.
Hope if helps.

I won't laugh at the story about jet fighters being chased by a four engine propeller aircraft. These are Chinese jet fighters, with real Chinese pilots. Therefore it is possible for a propeller plane to chase them down and bump them into the ocean.

"heur...yes, it is in the Special economic Zone, SEZ is 200 nautical miles off the shoreline. Check Wiki."
I am quite sure that no firm international arrangements exist that govern the use of waters further than 12NM off-shore [anyone have a reference for oceanic law???]. What gives the Chinese govt the right to declare up to 200NM off-shore as a special zone?

Checking Wikipedia is about as useless as checking with the local drunkard because anyone can edit Wikipedia, so please cite a credible reference.

To the regular program. The supposed maneuvers by the CH vessels are definitely martime NO NO's.

If this mission were truly as espionage oriented as the media have portrayed it, why would the US military have a want to release (or as some sources say, fabricate) a story about a ship patrolling near another countrty's coastline? Wouldn't the better solution be to keep this as covert as possible?
The real answer here is the US has patrol ships all over the world and these ships have been patrolling the globe since the end of WWII. With the world's largest economy (by far) touching just about every country, the US has a need for these activities. For now, we have run-ins like this. By working out miitary interfaces and information exchanges, things like this can happen without incident.