I'm in Hong Kong for its Literary Festival this weekend. Here is a photo I took from my hotel window: 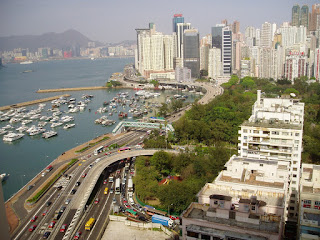 I've not been in Hong Kong for a long time -- 15 years perhaps? And I'm quite disoriented (it didn't help to arrive at midnight last night). This afternoon I went to have a look outside the hotel (named "the Excelsior") and saw young people jamming streets and stores everywhere. Here's a photo I took at the door of "Ireland's Potato": 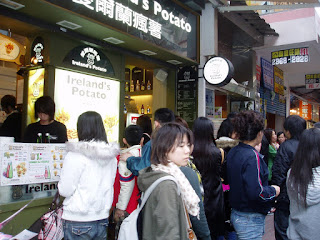 I asked a teenager who was eating chips on the sidewalk why so many people waited in line for this one. I thought he would say "because it's cheap," instead he said "好吃" (taste good). I had heard that the global financial crisis hit Hong Kong harder than mainland China, as a result many retail stores were closed. (This morning a reporter who came to interview me also said his magazine, a glossy one, was gone.) So this crowdedness on the streets was a bit unexpected. Was it "少年不知愁滋味" ? Even such a big crisis can't stop today's young people from enjoying shopping and eating out? Later I learned this area is a high-end shopping district (it didn't look like one to me). That could explain it, I guess. A young couple who were eating supper at the same table I sat at said "lots of rich people in this area."

I'll post about the Literary Festival after I return home Monday, and also respond to the comments below the previous post. There's no internet blockage in Hong Kong, but the hotel charges quite expensively for the wireless connection. :-(.
Posted by Xujun at 9:49 AM

Email ThisBlogThis!Share to TwitterShare to FacebookShare to Pinterest
Labels: China and Chinese

I was yesterday in one of the big business stores here and the parking place was full with cars and could see people pushing trollies full with their shopping.

Not so many as before but not the sight one would see in such a dire times as the media make us to believe.

It is strange economic crisis

I just returned to Hong Kong for a visit after a 40 hiatus in the US (I left age 10). If you were disoriented, think how I felt. Nothing looked like I remembered that time. I had to google images from the 60s and 70s just to know I wasn't hallucinating my memories. The area you are staying at, near Causeway Bay, certainly is a very crowded shopping district. I was there at night looking for a place to eat and couldn't believe the crowds everywhere and in the restaurants. If this is a depression, I'd hate to see what it was like during the boom years.

I'm sorry I missed out on the literary festival. Did get the chance to make it to the opening while doing my farewell tour of Shenzhen. Guess I'll have to attend some literary festivals around the states instead.

Have fun there for me.

Lucky Hong Kongers, they get Xujun in their literary Festival... when will you come to the Shanghai one?

Alfonso and Anon, you guys crack me up. :-) It IS a strange economic crisis, isn't it. I guess HK especially is having an unseemly one, probably due to its geographic and demographic characteristics.

Matthew, are you in the Boston area now? How's everything with you? Please email me when you get a chance.

Uln, you are too kind. Too bad I wasn't invited to the Shanghai festival - I guess that means my book remains unknown - or unaccepted - in China. :-)