"English Is a Bloody Nightmare, Isn't It?" 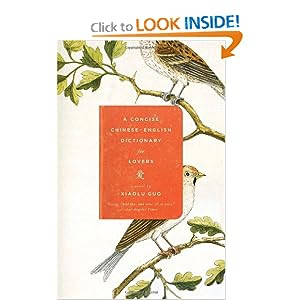 A Concise Chinese-English Dictionary for Lovers
by Guo Xiaolu
Anchor Books, 283 pp., $13.95
A Review by Xujun Eberlein
BlogCritics, Published: July 28, 2008
About one third into Guo Xiaolu's novel A Concise Chinese-English Dictionary for Lovers, a man at an English pub says to the confused protagonist, a young Chinese woman named Z, "English is a bloody nightmare, isn't it?"

I don't know if you saw this, but researchers have found evidence that the sentence structure Chinese and English share might be an unnatural and more difficult way of expressing ourselves. Both Chinese and English use a subject-verb-object construction, while languages such as Turkish use a subject-object-verb construction. When asked to communicate ideas using hand gestures, native speakers of all three languages revert to a subject-object-verb construction. For now it remains food for thought, as the scientists themselves admit the meaning of the study is still unclear.

Very interesting article indeed. Thanks for the link, Will.

This sounds interesting - I must look for it