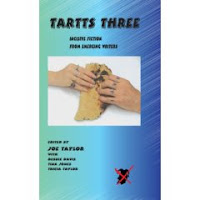 Today Google alert brought me a pleasant surprise: a review for Tartts Three, a short story anthology that includes my story "Pivot Point." Here is what the reviwer, Don Noble, has to say about it:

"Xujun Eberlein is a story writer who grew up in China and came to the United States in 1988. Her collection won the Tartt Award. Her story in this volume, 'Pivot Point,' has the wonderful, nearly invaluable advantage of having a setting unfamiliar to the reader and dealing with issues unknown to the reader. (Hemingway was similarly lucky, or wise, when he set stories in East Africa and on charter fishing boats in the Gulf Stream.) Eberlein's protagonist is a 26-year-old single Chinese woman who had been sent to the country for 're-education' at the tail end of the Cultural Revolution. She is in love with a married man — not a rare situation — but in China conditions for romance are claustrophobic and stultifying. The young woman, living in a tiny room in her parents' apartment, cannot get housing of her own; there is no privacy to be had. The affair takes some predictable turns but ends, as a story titled 'Pivot Point' should, with a twist. She will go west, not to die — as the folk adage has it — but to study philosophy in America."

It is also interesting Don Noble says later in his review that "There are no bad stories in this volume, amazingly, but there are some problematical ones." Continue to read the review here>>