A Few Anecdotes about My Hexagonal Pavilion

On its last day, let me end 2011 with a personal note.  After two laborious years, the hexagonal pavilion (六角亭) Bob and I started in September 2009 is finally finished (actually, I can only take credit for the inspiration, design and quality control; Bob is the one who built it): 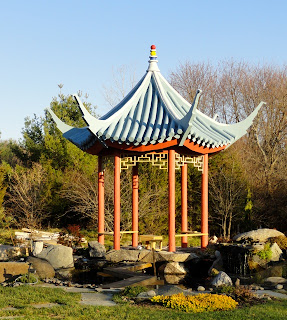 To compare, here is a photo of it in the first winter: 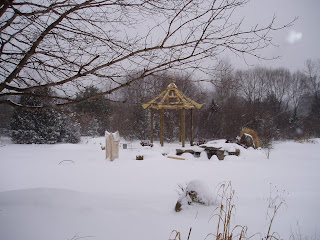 From the beginning I racked my wits trying to come up with a good name for the pavilion. After many failed tries, the name arrived without effort. In December 2009, I emailed the above photo to a friend, Wang Yan, in China. He replied:

In the Song Dynasty, whenever a pavilion was built, notes were written to record it.  I love such notes as those for "Happy Rain Pavilion," "Huangzhou Pleasure Pavilion," etc, but what I love the most is Su Dongpo's "Notes on the Terrace of Transcendence."


I had forgotten all about it: The Terrace of Transcendence (超然台), in Shandong Province, was where the great Song Dynasty poet Su Dongpo wrote his eternal verse "Bright Moon, When Was Your Birth" (明月几时有). (Some translate the poem title as "When Will the Moon Be Bright," which is clearly incorrect to me as the poem itself indicates that it was written during a full moon.)

The word "超然," besides "transcendence," can also be translated as "detachment,", "aloof," and so on.  "Transcendence" seems to fit our mood the best and, on reflection, it must be more than coincidence that we live in the area where the 19th century "transcendental movement" originated.  It was sitting by Walden Pond one day in 2010, for example, that Bob wrote his letter of resignation to the company where he had worked for two decades. (Later, when discussing the pavilion name, I asked him, jokingly, what we are transcending, and he said, "The chaos of office politics." In that case, I “transcended” seven years earlier than him, when I quit my job as an algorithm developer with steady income and became a writer with two sleeves of clear wind (两袖清风). :-))

Looking back, my whole life seems to be a struggle between aspiration for some sort of transcendence and failure in achieving it. No matter.  Don't you know a classic Chinese saying, "Though unreachable, my heart longs" ("虽不能至，心向往之")?

Thus we settled on the name for our pavilion:  超然亭, or "The Pavilion of Transcendence."

The last touch to complete the construction requires an engraved plaque, or 匾 (bian), with the name inscribed.  I decided to use seal script (篆字) for the inscription, and easily found an on-line generator for the three characters. But the color combination for the background and the characters was a bit difficult to figure out, even with computer simulation.  I asked around for opinions among Chinese friends, but they were as varied as our own.  Alas, one friend convinced us that "only black characters on a wooden background would match the meaning of the words."

I sent the specification for the plaque to my sister and solicited her help to have it made in Shanghai. She took my request seriously.  A few days later, she wrote back (in translation):

At first I thought this would be simple, because on Puxi's Fuzhou Road there are all kinds of culture and art stores that make anything and everything. When I went to the store that made frames for my paintings, however, the wood-master who has worked on this 'culture street' for more than 30 years told me no store makes bian (匾).

I didn't believe him, and walked through the entire Fuzhou Road to look. I found several engraving shops that make metal or plexiglass seals.  The workers, all young men in their 20s, had their mouths gasped in the shape of the question mark on hearing the word bian (匾), clueless as to what kind of thing it is. A nice young man called the storeowner for me. The owner asked, 'What is bian?'  I had no choice but say, 'It is a piece of wood engraved with words.' 'Aha,' he said, 'store sign!' I was speechless.  He then said if I provided a piece of wood he could engrave the words for me, 60 yuan a character.  Well, where do I go to find the wood?  Not to mention the wood for a bian requires certain machine processing.

I called directory information asking where to find a store that makes bian.  The operator was even more amazing. "Bian?" she said, 'you mean shoulder pole (bian dan 扁担)?'

I hadn't thought that Shanghai, the so-called international cosmopolitan center, would be so culturally ignorant.

I searched the internet with no results. An entire day was wasted.

The next day, my sister (who lives in Pudong) went to Puxi again and randomly looked around.  When she almost gave up, she ran into an auction store, above its door hanging an antique plaque with the inscription of "青莲阁," looking cultured.  She ran to the third floor asking if anyone knew where that plaque was made, and everyone thought her absurd. Fortunately she ran into a passerby, Mr. Dai, who said he knew which contractor made the plaque, and he helped to find their phone number. The very kind Mr. Dai also advised her that elm would be the best material for making a bian.

My sister then called the number Mr. Dai gave her, and found a Mr. Shen, who said he wasn't the right person and provided another number. Through that number my sister reached a Ms. Li, who told her to meet at a far place, nearly an hour's subway ride away. It turns out Ms. Li is a Fujian migrant worker in the business of antique imitation. My sister had finally found someone who is not a Shanghaies and knows what a bian 匾is.

And certainly, the bian is made of elm, just as Mr. Dai advised: 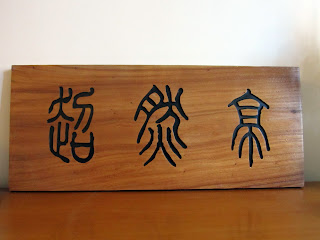 I can't wait to hang it up on the pavilion next spring.

Btw, Bob is writing a series of posts on the process of building this beautiful monster.  His first post is already up here.
Posted by Xujun at 12:00 AM

I have loved reading your posts over the past year. This one particularly makes me want to thank you for your efforts lent to your talent of expression. You are a true and very valuable cultural ambassador.

A pavilion without a "bian" would still be transcendental:)

Thanks, guys, for the nice comments! Alas, I couldn't transcend the need for a "bian" -- I just can't resist its beauty and symbolism. :-)

Thank you for bringing me back into your circle, Xujun. I have missed the qualities here.

The best hexagonal pavilion, actually the only one I have ever seen in the Boston area.

Don't know how you guys handled it, but it looks magnificent and authentic. A huge project and a job well done!