Anomie in the New China 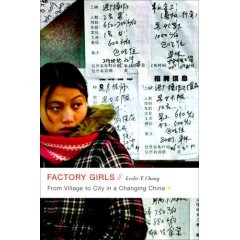 Factory Girls: From Village to City in a Changing China by Leslie T. Chang

The Chinese say, “The River is in the east for thirty years, then in the west for thirty years.” The adage uses the unpredictable behavior of the Yellow River as an analogy for periodic upheavals in Chinese life and society.

Within a thirty-year time span, China has seen two grand-scale migrations, each involving many millions of young people. The first began in the late 1960s and continued through most of the 1970s: more than seventeen million urban youths took part in the so-called “sent-down” movement—most against their will. I was one of them. After my 1974 high school graduation in the city of Chongqing, I spent nearly four years toiling in the rural fields of Fuling, leaving only when the end of the Cultural Revolution provided me the opportunity to enter university in 1978.

By the end of the 1970s, nearly all the “sent-down” youths, miserable and desperate, had managed to return to the city by one means or another. Barely catching our breath, none of us could have foreseen the reverse migration that would begin in the mid-1980s, when young peasants spontaneously left their rural homes to find jobs in the urban areas. >> continue reading
Posted by Xujun at 7:58 PM

This book sounds very interesting. Have you ever visited Asia Chronicle News? It's an online journal with excellent analyses and insightful predictions on not just China, but all of Asia. I think you'll find it to be informative and thought-provoking. You can check it out at asiachroniclenews.com