– Even though I felt exhausted yesterday, I still get up early, work on email and am on the road a little bit after . Last night I had planned my clever route from to that would avoid the interstate. Using Google maps I figured out a path that required only two crossings from one road to a nearby disconnected road. I have a long list of instructions, and it starts by following Santa Fe Trail drive. This I do, the road is a residential road, but also it is clearly the old highway. After a while it runs right beside Interstate 25 and I can see a sign on I-25 saying caution bicycles next 10 miles. This leads me to conclude that it would be okay to ride on the interstate. Another sign, shortly afterward, on the road I am on saying No Outlet leads me to believe my route may not work anyway. 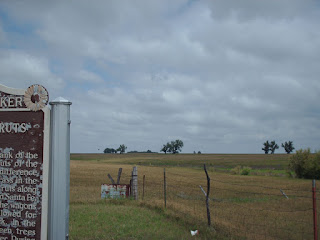 Nonetheless, I continue to follow the road I am on. Stubborn persistence is a quality I have always had. After a while it turns into gravel, but not too bad gravel, and then it just sort of peters out. I can see something that looks like it might be this road up ahead but no obvious way to get there. I am right beside the Interstate at this point and there are no barriers. I put on my running shoes and walk across the field, then the northbound lanes, then the southbound lanes and I am on the shoulder of I-25 headed south. All this happens without a car passing. The road is not busy this time on a Thursday morning.

As far as Interstates goes I-25 is actually somewhat deficient. Rather than a full lane width shoulder it has been built with a guardrail and a half lane shoulder. Thus it is still pretty annoying to have to deal with trucks passing, though this happens only a few times and they are going slower and slower.

The trucks are going slower and slower because the highway is going across Raton pass, about 7800 feet. So I just put it in a low gear and grind along, much like the trucks but much more impressively slow. The hill goes on for a long time, but eventually I get to the top, and get welcomed to . Not a very impressive sign, but I still take a picture of it.

The descent is too steep to just let go so I ride the brakes for a mile and a bit. After that the grade lessens and I can just coast down. I come to a much nicer welcome to sign and take a picture of that. Two young women are doing the same and running around giggling. 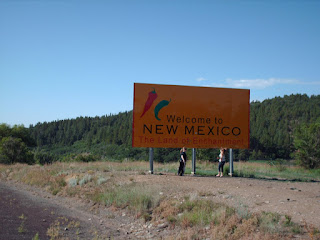 I take the first exit into the town of Raton, which is actually just an exit onto the old highway. This road has no traffic and I ride it into town. Raton is full of no especially nice looking motels and has a little downtown that looks nice, but not special. I am not sure what its claim to fame is but I expect it is mostly tourists who want cheap places to stay.

I stop at a supermarket to get some bakery and milk. There is a bench outside that is clearly for smokers, but as no one is around I sit down on it to eat my second breakfast. Just after doing this two people come along who look, if not homeless, then at least indigent. One of them is smoking so I get up to move, but the other says stay and I don’t want to be completely insulting to them. I stay for a bit and eat. One says he has a bike but needs to get it fixed, and the other says there is a bike shop in . “Maybe I’ll take my truck and go up there” says the first. It is not clear if he really has a truck. While the two seem to know the people around who pass by and say hello, the one sitting beside me asks if I have any spare change as I make to leave. The wind has shifted and the cigarette smoke is blowing my way.

I ride across the highway to finish breakfast under a tree. I check and there is a cell phone signal – what a surprise. After breakfast I get back on the road and make for Cimaron, where I plan to stop for lunch. The ride is actually much like was though I do end up chasing 3 deer. As I come up on them they panic and start to run. Because there are fences on both sides of the road they are hemmed in. I am a little bit surprised they can’t jump the fence, but they are small deer. Eventually they get bored running away and when I am even with them run the other way. This happens once with one deer, and a second time with two deer. The second time one of the deer actually managed to get through the fence by squeezing between the wires.

Fortunately, none of this caused an accident, though it was a little close as they would run back and forth across the road. A little later I came across a recently killed deer, at least this was not on my conscious.

I was expecting to have some fast food places to eat but it is a more rustic town and does not have any brand names showing. I go into a restaurant that looks small in front but is huge behind. I sit down in a booth and order a sandwich. The waitress is polite, but hardly warm. I ask for lots and lots of water and she brings me a glass which she dutifully, but reluctantly, refills several times.

The food is actually not that good, and the service is annoying. At a fast food place I refill my drink when I want to and don’t get these funny sidelong looks from the wait staff as I work on my computer. Somehow, the romantic image of the local café is fading from my mind. Perhaps it is just the voracious thirst of the road that does this, or perhaps eating alone is a very different experience than with a group of people.

Cimarron claims to be the gateway between the planes and the mountains and it turns out to be a true claim. After I leave town I begin to climb and soon am following a small river up into the mountains. It is a long, about 15 mile, hill climb, but it is absolutely delightful. I move slowly and revel in the sounds of the river and the smells of the trees and forest that surrounds it. Eventually I come to a big open meadow and there are a whole bunch of summer houses around. If not for all the houses, it would be an absolutely delightful place to summer.

Eventually the road diverges from the river and goes up a switchback to a pass. At the top of that I can see Eagle Nest Lake below me. This claims to be the best trout lake in , though I think it is a created lake and not natural. It sits in a broad alpine valley at about 8000 feet. is also where I intend to stop for food so I head down the road into town.

, the town, is there only to support the people who come to the lake to catch the trout. It has small motels and such, but I really don’t like it. I go to get some milk and some guy wants to tell me how bad the bike he got at Wal-Mart is and how the drivers in Esponosa are terrible. The whole conversation seems kind of odd and I run away to drink my milk and eat my leftover second breakfast in peace. It is cold, and I put on a sweatshirt.

The road from there runs along the broad valley and the wind has kicked up into my face. Frustrated, and more tired than I thought I would be, I sit down on the side of the road to see if I can get a signal for email. I can, though it is weak. I check email and then continue on.

My original plan was to get to Agua Fria and then camp down in the National Forest that follows. But looking more closely at a map I see there is a mountain pass just after that and don’t feel I have the energy to do that. So I decide to just find a place to camp down. I ride along and fail to do so and find myself climbing the mountain pass. Oh well, I continue along. It is just two miles of switchbacks and I am at the top. It is late in the day but there is plenty of light. I get to the top, 9010 feet, and try to take a picture, but my batteries are dead and the camera refuses to let me.

Frustrated I begin my descent, I don’t want to camp too high up as I suspect I will be cold. After a while I stop to put on another sweatshirt, then continue descending. It is generally a pretty easy descent so I just let the bike go and enjoy watching the mile signs go by. I come to an organized campground and check it out but it is designed for RVs and does not look attractive. I decide to just find a spot off the road but as I descend everywhere becomes houses. I am pretty sure I am in a National Forest, but apparently it is a well inhabited one.

As I am peddling on one of the short flat stretches my crank makes a funny noise and I look down to see that the bearings are falling out. The crank started a little bit loose, and has been getting worse, but I thought it would continue to wobble along. I was wrong. I need to pull it apart and see if I can convince it to take me on for another couple of days. If not, I will be hitchhiking.

I want to try to repair things in the morning but I can’t stop where I am. I put on my running shoes and push the bike through the flats then coast. I am afraid if I pedal all the bearings will fall out and I will have nothing to work with when I try to repair it in the morning. Eventually I come to an official National Forest campground and settle for the night. Not surprisingly, there are no cell signals at all here. I will not be able to communicate tonight.

I am very close to the road, but also right beside a stream. The sound of the stream drowns out the road noise and makes for a pleasant sleep. Tomorrow I will have to see if I can get my bike to work again.