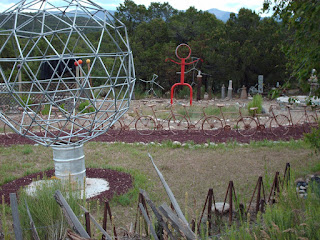 – Having gone to bed tired, cold and downtrodden I wake up early in the morning. No email to catch up on, but I do complete my log for the day before. As light begins to filter into the sky I get up to have breakfast. I only have 4 pieces of bread left so decide to make it peanut butter and jam for breakfast in order to push me further into the day. Since I am at a campsite with a picnic table I take advantage of it and have my peanut butter and jelly sandwiches in style.

Next I start to look at the bike. I pull off the rear panniers and put out the cover to my tent to catch any loose bearings. Then I pull of the crank arms to inspect. I discover I do not have the tool to pull the bottom bracket so make do with looking. The bearing unit has fallen apart. The thin metal guide which holds the bearings in position has fallen out and the bearings are not in that any more. It looks pretty bad, all in all. I can pack the remaining ball bearings into the race and they seem to stay, though there are not nearly enough to fill the unit. I do this, put in the bearing shield which has also fallen out to hold them in place then roll up some electrical tape and pack that around the shield. To keep it all in place I wrap the whole bottom bracket with several layers of electrical tape, and put the cranks back on.

This is not a pretty solution, but it seems to be viable. I am pretty sure I can make it to , but I am not hopeful of finding a bike shop there. I wash my hands with water from the stream, pack up camp, pay the $5 fee to the US Forest Service and limp out onto the road.

Fortunately the road from my campsite to town continues to be downhill. I eventually pass out of the mountains into an area that could almost be suburban except for the Adobe buildings. A woman out for a morning walk says hello to me. I continue into town. My bike randomly shifts gears as the chain drops from one chainwheel onto the next when the peddles wobble. I get to an intersection with a coffee shop and see a man with a bike drinking coffee. I ask him if he is from around here, and if he knows whether there is a bike shop. He says he is, and that there are two. One is just down the street we are on, and another about a mile down a parallel street. He says he thinks the nearby one opens at and the further one at 10. He also says the one further away has better mechanics.

It is still only about but I decide to check out the shops. I go to the nearby one, which is on the left. Even at this time of day there is so much traffic it is hard to cross the street. Eventually I do, it is a big place, opens at , and looks like it will work. I sit down in front of it and get my computer out to catch up on email and call Xujun.

After looking at my email it is still early so I decide to check out the other bike shop. I use Google maps to figure out the location, though the instructions I got at the coffee shop turn out to be right. I ride toward it and notice a McDonald’s at , one of those rare McDonald’s that tries to blend with the local character, and figure I will come back for some more breakfast.

The second bike shop Taos Cyclery is where it should be. Smaller than the first, the sign on the door says it opens at 9. That clinches it for me. I decide to forget about food and sit down to wait. The shop is in a small plaza and there is an electrical outlet by one of the stores so I plug myself in. About somebody rides up and unlocks the door. I ask him if they will open soon and he says 9. Ten minutes later he is back though, and I head on in.

I pull all my packs off the bike and my mechanic, whose name I never learned, puts it up on the stand and pulls off the cranks. He has a bottom bracket the right size so it is just a matter of getting the old one off, and the new one on. That turns out to take a while.

They do not have the tool to remove the bottom bracket; it is smaller than the standard. We resort to tapping it out with a screwdriver but it just breaks up the part. I try a Vise Grips, but only have the same effect. I am almost ready to give in to despair, but eventually Doug, the owner, comes over and explains we are trying to tighten not loosen the thing. That is helpful info, and pretty soon we do manage to get the old one out.

Putting the new one in starts out smoothly, but once it is in the crank is hitting the bike frame. This requires a spacer and the adaptation of the retaining bracket so that it will thread into the frame. That takes a while, but it does work.

In the meantime somebody has come in flaunting TGIFFF burritos. I couldn’t figure out what the last two FFs are all about but say I would love one. He says it is chicken but is seemed to have bacon, eggs and a whole bunch of other stuff in it. It is good, I guess, but seems to require a cast iron stomach. Anyway, it serves as my second breakfast and lunch combined.

I go to the store to get some batteries for my camera, and also a loaf of bread. Come back and get some pictures of the bike shop. 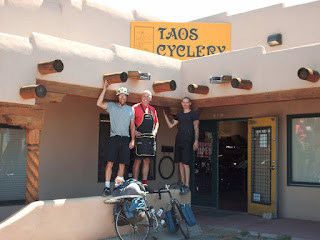 I go over a map with Doug who tells me the straight shot to Santa Fe is a narrow busy road and that I should take what is known locally as the High Road to Taos (even though I am starting in Taos). He also says that Espanola is worth avoiding. Advice I would not take from the Wal-Mart bicycle guy I do take from Doug. And so I set off for the high road.

Only a block from the store there is a thunking every time I pedal. All this work and just trouble, I think to myself. I take a closer look and it turns out one of the bolts holding the small chain-ring is loose. An easy fix. I pull out my allen keys and tighten it up, and I am off.

Doug described a 5 mile climb to start the high road, and reality does not disappoint. It is getting warm as the sun comes out but as I climb the air cools so it is not so hot. The big problem is flies. I am going so slowly that the horseflies act as if I am standing still. The horseflies are more annoying because they bite. There is nothing to be done but wave at them, sometimes I wish I had a tail.

The road goes up and the mountains are beautiful, with a great vista looking back toward . After that there is a descent, and I find some chocolate milk for a mid day snack, since the burrito took care of lunch. Food is followed by a brutal section of up and down riding. This is very much like , except the uphills seem steeper and the descents do not require as much braking. I am not sure what to make of that.

Eventually I come to what I can only describe as the edge of the desert. There is a very long, and very steep descent from the beautiful mountains to the scrub brush desert below. It is so steep that I hold the brakes tightly and creep my way down the hills. I get to the turnoff that will allow me to avoid Espanola and take it. But the road quickly turns tiny, and begins a difficult, and seemingly purposeless, climb. I decide to go back to the main road and deal with Espanola.

There is, however, a second chance. This time the road that avoids Espanola is recommended by a sign about the High Road to and it looks like a more respectable road. With the exception of the odd cattle gate, indeed it is. After one more hard climb heading south I hit the road to the west and get to easier riding, that eventually takes me out to the main highway into Santa Fe.

I stop for dinner and rehydration. The cool of the mountains has given way to the heat of the desert and I am thirsty. It is only about 14 miles into and that seems like an easy ride to me so I set out. I climb for the next 10 miles. Most of it is not steep, but it is slow going and it takes a long time. By the time I reach the light is starting to fade. It is not getting dark yet, but soon will be and is later than I like to ride. I find a motel on the road and check in for the night. Not too impressive, but it will hold me.

What a couple of days for Bob! I admit to reading the NYT's reportage of the Tour de France, but not with the anticipation I have had to read Bob's next installment each day. Thanks for sharing your adventure.

What a great comment, thank you. I started on the same day as the Tour so have been watching it. Those guys are so fast, but they also know where they are going. Perhaps if they let the group get lost from time to time it would make for a more interesting race.

Hi Scott, I surely am happy that there's no more suspense now that he has arrived at his destination. :-)