(Note: Some of you already know that Maple is an avid traveler and photographer. This is one of her latest travelogues, posted in two parts. See also her Dream Left on Covered Bridges 廊桥遗梦, and Yuyuan Taiji Celestial Village. - Xujun)

Ten years ago, what first brought me to Lugu Lake was a travel magazine photo. In that photo Lugu Lake was like a sparkling gem, inlayed on the northwest Yunnan highlands, the water's radiating reflections and the mountains' rich colors comprising an unsurpassed beauty.

I did not know much then about the rare continuation of the Mosuo people's matriarchal tradition. At the time Lugu Lake was a newly developed tourist attraction. The entire village had only one or two guest houses, two-floor wooden lodges made by the locals. Upstairs were bedrooms. On the ground level was the spacious central room, in the middle of which a huge fire pit burning wood day and night. On the fire buttered tea was boiling; in the fire fresh potatoes and corn were roasting. 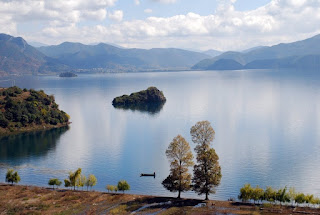 In the house I stayed at there was an old grandmother, who sat in a big wooden bed cushioned with a thick sheep wool blanket, and smiled at me kindly. She did not speak Mandarin, and I didn't know the Mosuo language, so the only thing I could do was to smile back at her. We smiled at each other for probably a couple of minutes or longer, but neither of us felt awkward. Then she went to the fire pit and dug out two cobs of roasted corn, deliciously aromatic. She patted the residual ashes off the cobs with her furrowed hands before giving them to me. I obediently sat by her and ate. She looked at me; the warmth of a tender affection in her eyes made me remember my late grandma.

During the next few days I noticed that men and women in the house all revered the grandmother. When eating they held the best food to her first. When sleeping they kept the warmest place for her. For everything they asked her opinion first.

I asked her son, This place is called a "girls kingdom," does it mean women have the highest status? And he told me about the Mosou tradition of "A'xia," or "walking marriage." The man and woman in such a relationship each lives with his and her own mother. The man comes to the woman at night and leaves at dawn. All their children are raised by the woman. The two sides have no ties in terms of production, living, or properties. Their relationship emphases love, and they marry freely and part at will.

I was not impressed. Such a marriage is not protected by law. Wouldn't things fall into chaos? A woman can have many men and a man can have many women. Children don't even know who their real father is. 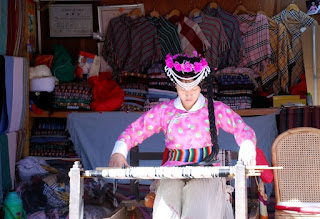 But the son said to me in all seriousness: Don't you Han people also have unfaithful men? The situation does exist among Mosou, some men to have "walking marriages" with several women. However usually a man has a relationship with only one woman at a time. When a couple fall out of love, the man simply stops "walking" to the woman, there is no property dispute or custody fight. It's not like you Han people who turn into enemies because of a divorce.

In every Mosuo family, the household head is the oldest woman. The grandmother in the house I stayed had two sons and three daughters. The oldest daughter had been in a "walking marriage" for three years already and they had a boy. Her other two sisters were still young. Both brothers were in their twenties and every night they went out for their "walking marriage." The older brother had a daughter, raised by the baby's mother. 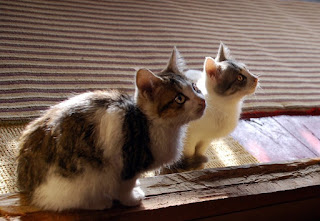 I was both confused and curious. That night I begged the oldest daughter to take me to their "guozhuang" dance party. Mosuo women are natural sopranos. The woman's singing of "Qinhai and Tibet Highlands" stunned all the Han tourists.

At that time the Lugu Lake area did not have street lights. The oldest daughter and I walked home in the dark, behind us were a bunch of men holding touches, chatting and laughing. I asked, Is your boyfriend among them? Is he coming to you tonight? I want to see how handsome he is. She laughed bashfully, pointing a finger at me but couldn't talk. Not until we reached the door when she whispered to me that it was still early, time for men to drink and chat. He would come late in the night, after everybody at home had gone to bed.

I became more curious. You two already have a son, how come you are still so shy about it? Her face turning red and she laughed again. She pulled my long hair and complained, Why are you asking about everything? I'm not talking any more. Her expression made me yearn for the Mosuo love.

I imagined myself as a strong Mosuo man, on a night with a bright moon and thin stars, rowing a boat carved of a whole tree trunk, from the island in the lake, knocking my lover's door. Not for money, not for status, not even for progeny, just for love, pure love. 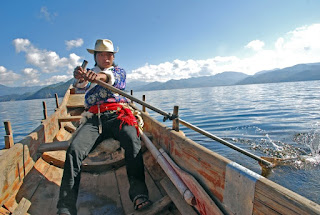 That night by the fire pit, I asked my host's youngest daughter, Your sister's son is only a few months old, and she needs to work in the day, tending her walking marriage in the night, who takes care of the baby? The girl looked surprised by the question. We all take care of him, she said, whoever has the time. He's OUR son.

Children call all women at home "Ama." The grandmother, aunts and uncles are all their guardians.


~
Now, ten years later, I arrive at Lugu Lake again. It has become a hot tourist attraction. The lakeside is full of bars, shops, and hotels. Tourists do not come in groups of two or three carrying backpacks; they pour out of buses and cars. Using the words of a friend, who has been running a teahouse here for a decade, "It is horrible!"

Fortunately there are still misty waves on the lake of the horse hoof shape. Fat clouds in the blue sky are still exaggeratedly gorgeous. Water reflecting mountain, mountain shimmering with dew, Lugu Lake is still like a fairyland. Perhaps even more fortunate, the transportation is still backward. From the nearest travel center Lijiang is 200 kilometer and takes nearly10 hours winding up the mountains. I don't want to imagine, if there were a highway, or an airport, what would happen to Lugu Lake. 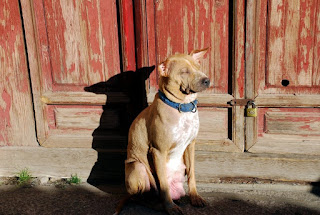 What would happen? My teahouse owner friend replies, Of course my business would be even better. Apples and walnuts from the mountains would be easier to sell to outside.

Don't you know that the ancient town Dayan in Lijiang has been destroyed by the endless development of tourist business? Do you want Lugu Lake to become the next Dayan? I say to my friend.

You don't understand, my friend pats my shoulder tolerantly; Mosuo people have the instinct of self-preservation. What you worry about won't happen here. (To be continued)

Your translation of your sister's travel log (the old grandma, the fire pit...) reminded me of my own experience in Lugu Hu, which was about 12 years ago. I haven't went back since but have been always wanting to. Hope it is not "destroyed". A search of water quality in Lugu Lake brought me some dismay (water quality has degraded, native species are declining...) and some hope (there are people doing research and making efforts to protect the local culture and environment...). I hope that whichever the direction Lugu Hu is developing towards, hope that the local people have something to say, and not just the investors from outside of the area, who just want to make a fortune and leave, and/or some local officials who just want to make a few short-term political points.

Hi Bien, you were there two years earlier than my sister! So you are an avid traveler as well. Do you have photos from that trip to share?

Hi Xujun, I'd love to. Unfortunately, I don't have those pictures with me now. They were taken before the digital camera age, otherwise things would be a lot easier... I will keep a mental note about this and remember to share those photos in the future.

easiest way to preserve the mosuo culture is to start up these communities all over the world
the monks and nuns did,
so why not include the children?
more and more single or divorced mothers escaping violence and sexual abuse of their children by the fathers
womens shelters can be permanent farms, owned by elder women, like the native indian haudenosaunee (iroquois) which were a matriarchy society run like the mosuo.
have u read book iroquois women by w.s. spittal? published by native reserve in ontario
quite like the mosuo- yet so far away
join me in forming mothers land communes, for the prevention of child-or woman forced sex and violence
.peace & hope
louise mollot, vancouver,bc, kanata
lmollot@gmail.com
matriarchyintl@gmail.com