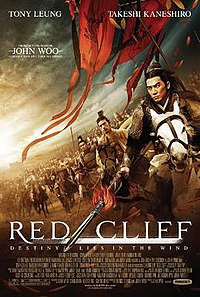 There is a Chinese expression, 搞笑，whose direct translation is "do laughter." This expression, an infection from that did not exist on the mainland before opened up in the 1980s, is often used to describe a ludicrous movie. Now the expression is applied to Red Cliff, the most expensive Asian-financed film to date.

Directed by John Woo, Red Cliff reportedly cost US$80 million. As a fan of the classic novel Three Kingdoms, I was very eager to see what a difference such a big budget could make on a repeatedly filmed story. Adding to my eagerness was the fact that one of my favorite actors, Tony Leung, plays a starring role, Zhou Yu.

Because (a shortened version of) the movie for the theaters will not be shown until early 2009, I called my sister in and asked her to buy a Chinese DVD for me. It turned out she had just seen the movie. She used the expression "do laughter" when commenting on it. "Be prepared," she warned me.

I couldn't connect the notion of "do laughter" with the grand war scenes of Red Cliff. On the other hand, I have seen how some movies turned traditional imperial stories into jokes. Not having grown up with the culture though, these renderings could never make me laugh.

Impatient, I ended up buying the DVD from a Chinese online store in the . As expected, there are grand battle scenes, which at times are too long. Toward the end, in a scene Zhu Geliang, the great war strategist, sent a pigeon into the enemy camp to extract information. The scenes of the enlarged flying bird obviously were computer-generated animation, which reminds me of techniques used in fantasy movies such as "Lord of the Rings," not the least bit like ancient Chinese.

Yet copying movie techniques is the least of the problems. The character Zhu Geliang, who is supposed to be the wisest, acted by Takeshi Kaneshiro, is way more handsome than intelligent – that is a bit more of a problem. In a battle preparation scene, the actor uses Zhu Geliang's signature goose feather fan – the symbol of wisdom – to cool a pigeon on a hot day as if the bird was sweating. Asked what he is doing, the gorgeous-looking actor (I refuse to connect him with Zhu Geliang) answers, "I need to keep cool." Silly behavior and language like this, which fill up the movie whenever it's not showing a drawn out battle scene, really are "doing laughter." My reading of audience reaction from the Chinese internet afterward confirmed this perception.

I of course have no objection to jocular treatment of any subject. The problem is that the director (and playwright) obviously did not mean to make the movie as a joke. The money, intent and effort were dead serious. Why it has resulted in such a laughable effect can only be explained by two things: one, the director and actors were unfamiliar with the history (I wonder if they have read any books about it other than the screenplay); two, with a long oral story-telling tradition of the Three Kingdoms, we Chinese audience can no longer accept a stupidification of historical figures. At least not Zhu Geliang!

I suppose the silliness in dialogues will be less a problem to American audiences. After all, the unintended effect might be lost in translation. Further, someone has made a wise decision to cut the length of the original film from 4 hours to 2½ for American theaters. I hope this will help improve the attractiveness of the battle scenes and also eliminate some "do-laughter" elements.

To be fair, there are also some creative and fun details in the movie, for example the association between a turtle's shell and Zhu Geliang's "eight trigram" battle formation. Zhou Yu, who was known in history to be proficient in music, stopped in the middle of training his army to tune a flute for a village boy. Still a bit overdone, but at least for a reason. And IMO Tony Leung did a better job acting Zhou Yu than Takeshi Kaneshiro acting Zhu Geliang, though my impression is that, judging by the two actors' appearances, switching their roles would better match our images of the historical figures. I heard that Tony was originally assigned the role of Zhu Geliang, but he refused, citing that he was not familiar with the role.


Overall I felt director John Woo had a tendency toward overkill, which resulted in humorless exaggeration in the acting. He needs to exercise a bit more control and incorporate a bit more subtlety next time.

Email ThisBlogThis!Share to TwitterShare to FacebookShare to Pinterest
Labels: arts and entertainment, China and Chinese

To buy a DVD for it would be wasting money, you could have just watched it on PPstream or any such. :)

Hmmm, didn't know anything about PRstream. Thanks for the tip, Rocking. Will go take a look.

Some have spoofed a clip of Red Cliff into commercial for 支付宝:

It was pretty funny. Thought you might enjoyed it.

Haidong, this is hilarious! Is 支付宝 a real company?

Yes, it is. I don't know much about it, but my impression is that it is like PayPal and Google Checkout. I believe it is a subsidiary of Alibaba, THE e-commerce portal in China.