A group of my Chinese American friends and I joined Boston's counter-protest today, because we feel that increasing racism, encouraged by Donald Trump, has become a significant and ever-dangerous trend in America. We were all outraged by Heather Heyer's murder a week ago, and shocked that Nazis could openly stage such a comeback. Is this America??  Is this still the America we immigrated to?

So as soon as we heard about the so-called "free-speech rally" in Boston, we felt the need to show the world that we are with the majority of Bostonians who have no tolerance for bigotry and hatred. "作为少数族裔，我感到义不容辞，需要现身表明立场" — "As a minority member, I feel duty-bound to show up and take a clear stand," was how one friend put it. 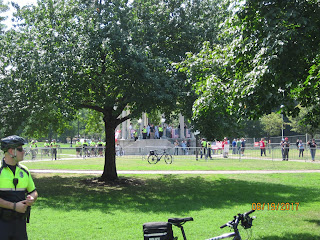 A little after eleven this morning, when my friends and I arrived at Boston Common, the police had fenced out a large area around Parkman Bandstand (see photos below).  From a distance, only a few, hardly discernible small shadows could be seen on the Bandstand stage; otherwise the protected area was completely deserted.  And so the scene of a sea of counter-protesters —thousands?  tens of thousands? —outside the fence looking into a largely empty ring was kind of funny, but in a good way. Apparently, the police were determined to make an effective firebreak between the right wing speakers and counter-protesters, but with the unexpectedly tiny size of bushfire, the firebreak seemed oversized. It worked though. Where were the thousands of attendees the so-called "free speech rally" organizers said would be there? Had their rally petered out before it even began? 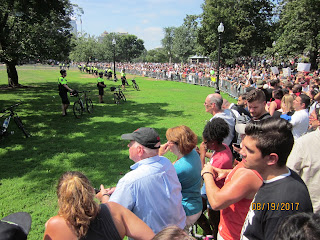 Some of us thought those racists might show up at noon, the scheduled time of their "event," and that would be our time to confront them.  A few minutes before noon, I managed to squeeze through the counter-protesters to a gap in the temporary fence, in time to see an array of policemen walking out. I asked one of them if more of the "free speech" guys were going to arrive. "That's it," he said, refereeing to the sparse grouping of figures on the stage.

Later, after the "event" ended early, before 1 pm instead of the scheduled time of 2 pm, I asked another policeman guarding the Common how many people were there; he said about two dozen from the "free speech" side, and 25k counter protesters.  I asked why he thought so few of the former party showed up.

"Because they are idiots," the police said with apparent scorn.

I was actually not that surprised by the faltered "free speech rally."  Yesterday, a friend had found this on Facebook: 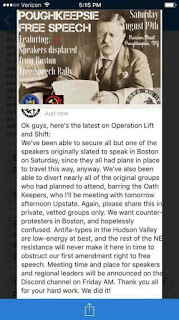 What does this mean?  Go figure.

So the counter-protest, for which we had worried about Charlottesville-like violence, turned out to be a largely fun outing.  Here are a few anecdotes from today. 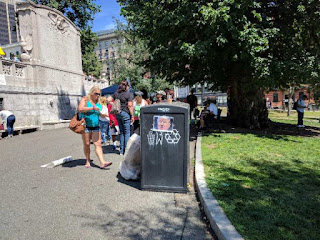 One of us, a photographer, saw a number of men who claimed they were "free speech" members and wanted to join those on the stage.  Police guarding the entrance told them their names were not on the list given by the organizer, and refused to let them through the fence. Our photographer followed those guys, escorted by police, moving around the big circle, and saw that at every entrance they met with rejection.

My husband, an American who had lived in Canada in his youth years, was dismayed to see a Canadian flag on the Bandstand. Some Canadians came to Boston to be racists? He wondered aloud.

People were booing someone waving a Sickle-Hammer Soviet flag. It was too far from where I stood and I could only see the flag swinging in air. Couldn't figure out the motivation of the flag-holder.

At one point, the crowd before us cheered loudly. I then heard that someone had turned on the sprinkler in one area of the Common, and a few "free speech" members passing through got a free shower.

An old couple, who held an American flag and said they supported Trump, were arguing with some counter-protesters. I got there at the end of the arguments, when the old couple were leaving. A bystander who looked like had been in the service was helping the old lady, carefully and correctly folding her flag for her so that she could carry it more easily.

Here are more photos from today, some taken by myself, some by my friends. I got a kick out of the many creative signs. 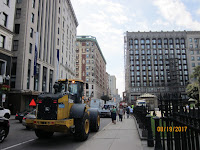 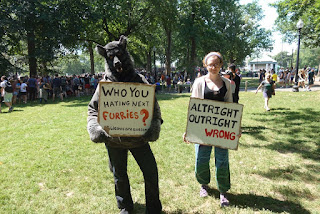 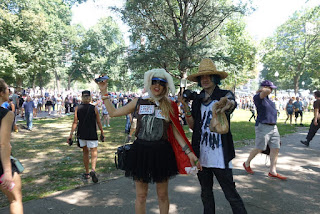 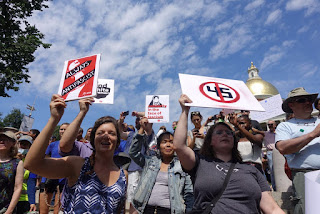 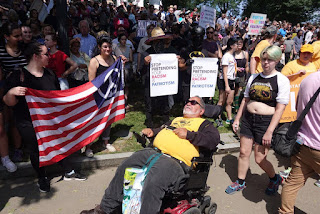 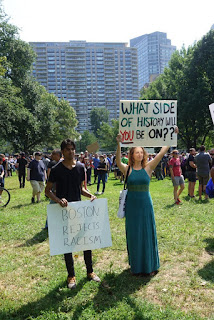 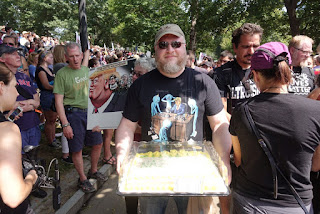 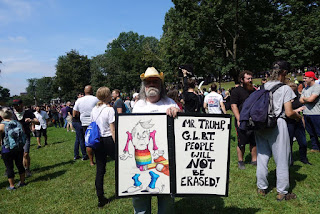 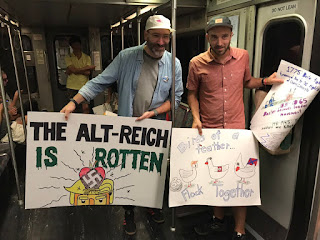 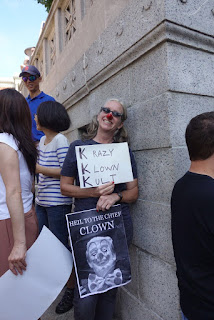 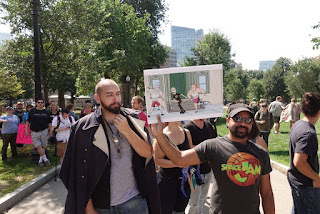 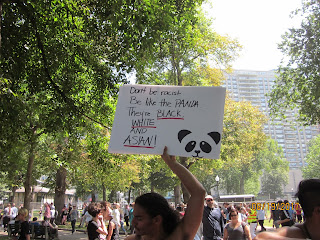 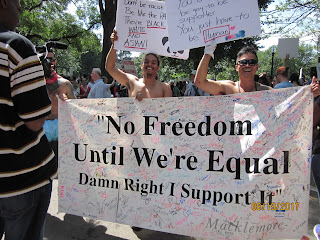