A Boxer-Murder Mystery in Hainan: Part 2

[in translation, continued from Part 1 / 阅读中文原文]

A brief history of Christianity in China before I go further:  Catholics first entered China in the 7th century; now there are about four million Catholics in the country, commonly distributed in the suburbs around cities big and small.  Protestants entered China in early 19th century; their missionaries often settled in remote and backward areas. Many never returned home, but became common residents of villages, unknown to the public. They struggled to make a living in adverse conditions, just like the locals, until they died and were buried in the wilderness. Along the Yunnan-Tibet, Yunnan-Burma, and Sichuan-Tibet borders, I've often seen tombstones like this: "Allen Thompson, English missionary, 1805-1886."  Currently China has about ten million Protestants.


*
A little after 10 am, we arrived at the town of Jiaji, in Qiong Hai city’s jurisdiction. I hadn't been here for four or five years, and was a bit surprised by its change. The rural dirt roads had developed into a four-lane asphalt highway. The farm fields on the roadside had changed into beautiful residential enclaves. Carrefour and Kentucky Chicken replaced farmers markets. Four- or five-star hotels neatly lined up.
Situ asked: "Therefore each year the Boao Forum for Asia (博鳌亚洲论坛会) is held here? Didn't Ms. Clinton stay here a few days ago?"  I laughed: "You are a China Hand! Even this you have heard. Who knows, tonight you guys might stay in the same hotel Hillary did." "That's impossible," Situ said, "we booked the hotel online. It's an average one, about 700 yuan." He took out the receipt to show me – it was exactly the Sofitel Hotel where Hillary had been! Situ laughed loudly: "Therefore Hainan people are really fortunate! In Beijing hotels of this caliber would cost two or three thousand yuan a night."

All the way Situ carefully translated our conversation for Karl, who smiled and nodded, saying little. I pointed out to Karl the road sign for Jiaji; he straightened himself on his seat, looking serious, even a bit nervous, and murmured, "A beautiful little town." Was he surprised by the place where his grandfather had once lived? More than 80 years had passed, the then barren hills and dearth of water changing into a splendid land. Jiaji had been a remote village that took an ox cart several weeks of travel from Haikou; now it is basically not much different from Sanya or Haikou. It does have a unique location: at the mouth of the Wanquan River where it flows into the ocean. The location gives Jiaji a rare, long, fine white-sand beach and world-top Golf courses. Indeed it would be hard to imagine what it looked like in the 1920s.
Had we not first contacted the Jiaji Church through the Hainan Christian Association, it would be very hard to find the church building.  On the blurred old photo in Karl's hand, Jiaji Church, in classic European-style, stands out from the surrounding low, shabby peasant houses. But when we reached it – in the direction pointed to by passers-by, through a side-door of Jiaji People's Hospital, round a corner between the hospital and a middle school – we had not expected the church to be so fragmentary and not particularly noticeable.
Taking no time to exchange pleasantries with the ministers and elders who came to welcome him, Karl went straight ahead to compare the building with the photo in his hand, puzzlement fully written in his face.

Elder Zhou of Jiaji Church hurriedly explained that, after liberation [in 1949], the church hospital and school were confiscated by the government, the staff members dismissed, believer services prohibited, and the church itself became the county government office.

The church hospital, which for a while became a storage room of the local "supply and marketing cooperative" (供销社), is now the patient records and statistics office of Jiaji People's Hospital. The church school has been changed into Jiaji middle school. During the Cultural Revolution, Red Guards destroyed the church's tall bell tower. The current bell tower is a rebuild after the government allowed the restarting of church services in 1982. For various reasons, the rebuilt tower is 5 meters lower than the original one. 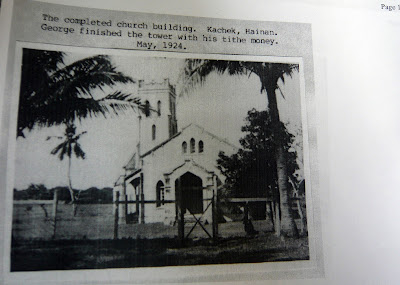 The original green land in front of the church no longer exists, replaced by residential buildings for the hospital employees and the church office. The once handsome old church had been nearly buried by those big ugly modern buildings.
I was worried that Karl might cry. Fortunately he didn't, only his face reddened. He walked unstably as if on clouds, round and round the church. In this mild morning of late autumn, the American Karl sweated profusely, wetting his T-shirt.
After carefully making two rounds through the inside and outside of the church, Karl wanted to climb up the bell tower.  Elder Zhou hurriedly explained again that this isn't the original tower, there isn't any bell in it, and the staircase is very narrow and hard to climb. Karl looked at me and said softly, "I want to go!" I suggested that we all step aside, just let Karl go there with Situ. Perhaps he needed a little time alone.  Hearing Situ's translation, Karl said nothing, giving only a slight pat on my shoulder.
The two stayed on the bell tower for about 20 minutes.
About noon, a church staff retrieved from a storage room four pieces of wooden signs made in the 1920s, when the church was built. He said that, as the only antiques surviving the Cultural Revolution, these were carefully preserved. Karl let Situ translate the texts on the signs. Although Situ could read some Chinese, he had a hard time translating “真理接圣神”“音从云汉来”“福自天堂降” and“福音传天国”. His unintelligible mumbling amused the audience. Karl laughed, too.
Karl took out another photo, and said that's the cottage his grandfather had lived in. "Is it still here?" he asked.  Elder Zhou replied it might still be, but to be sure we must ask the oldest man, Elder Wu.
As soon as the 92-year-old Elder Wu appeared, he astounded all of us. Men of longevity are not rare in Hainan; I've met quite a few more than a hundred years old. But seeing one over 90 with such a clear mind, straight back, black hair, vigorous spirit, and fleet feet, was a first time for me.
Elder Wu suggested we take a short cut. "It's closer, but the trail is a bit hard to walk. Wait for us here if you are tired," he said caringly. I had to trot to keep pace with his steps. I asked if he knew what happened over 80 years ago. Elder Wu said evenly, "I was the closest playmate of Karl's father, his only playmate still alive. I witnessed George's death." My mouth opened and closed like a goldfish short of water. (To be continued here)

I will forward your comments to the author, but if you could cite the source of your numbers, that would be helpful.

The author replied that her data (14 million) was given by a minister of the Jiaji Church (where this story took place) and might not be up to date. I also found that the latest statistics in the Blue Book of Religions by China's social science academy show atotal of 23 million Christians in China. Here's the Chinese link for this data: http://www.china.com.cn/news/local/2010-08/11/content_20687175.htm

I remember my first year in graduate school at UC Berkeley hearing Prof. Yeh Wen-hsin (a non-
Christian) say that the number of practicing Chinese Christians was very near to (or slightly more than) the number of CCP members.

Though there's no way to know for sure how many Chinese are practicing in underground churches, my guess is that the CASS figure (24 million) is wildly inaccurate.

Agreed that the number of Christians practicing in underground churches is very difficult to count. As such it seems neither China's "official" data nor the wiki one is reliable. But as you said, the former almost certainly is too low.