SHANGHAI, China – Before the Shanghai Expo began, a friend and I made different predications on which month would be the most crowded. She said May, because it'd start with the three-day labor-day holiday period. I said June, because everyone would think the same way my friend did and thus try to avoid May. I was unfortunately right, but because of a chance circumstance, I myself ended up going there in the peak month.

My husband and I planned on a three-day visit: one day each to the Asia Square, Europe and America Squares, and the Urban Best Practices Area, respectively.

Friends who had been there before told us, if you don't want to wait for hours in line outside the Expo gate, noon is a better time to go. Indeed, we arrived at the security point around 11:30 am, and there was almost no line. When asked, a staff said that since 9:00, over 400 thousand people had gone in. My heart tightened: what a rumpus would 400 thousand people kick up inside! But when we reached the square, it was surprisingly empty. Where had all the people gone? Standing in lines all over the world.

I had been prepared for lines; still, I was shocked by what I saw at the Saudi Arabia Pavilion. The line was so long it snaked along several streets, and a sign showed "waiting time above 8 hours." With no exaggeration, we walked at least 15 minutes just to find out how long the line was. What's more, it wasn't even a single line; in each row 4 or 5 people were pushing into each other.

Seeing the slowly creeping line toasting under the sun and people's worn-out faces, I was puzzled: what's worth so much as 8 hours standing in the line? The answer turned out to be a 15-minute 3D movie. My God, can it be more splendid than Avatar? No way. Even for Avatar I wouldn't want to wait 8 hours. My husband shook his head like a rattle:"All lost minds. All lost minds."

Sigh. The bottom line is our countrymen are too poor. After all, those who have the means to travel internationally are rare. The majority of Chinese have not seen much of the world. Once they heard the government advertizing that "Among foreign pavilions, the Saudi Arabia Pavilion has the biggest investment – 13 hundred million RMB, and it has the world's biggest IMAX movie theater," everyone's gone mad. Disturbed by this, my husband said seriously:"If any pavilion requires more than an hour wait, we won't go in."

As such, the China Pavilion was the first we gave up. It wasn't that I was unpatriotic; I had no other way out. In the whole Expo, only two pavilions allowed pre-registration. Without pre-registration, each of those two would require more than four hours of waiting. Meantime, pre-registration itself requires waiting in line because there are too many people. My friend's father, in order to obtain pre-registration tickets for outside relatives, waited in line at the Expo gate from 5:30 am to 9 am, that was three and a half hours. The tickets ran out within twenty minutes after the gate opened, so lots of people wasted their time in line.

And I had no choice but to give up on two of the most worthy pavilions: Korea and Japan.

Pavilions like Iran, Afghanistan, Pakistan etc. did not have lines. They were more like markets than exhibitions. Retail vendors set up stalls right there in the halls, and hawked their wares: scarfs, bracelets, and rugs. For a scarf that was priced for 420 yuan, you could bargain down to 50 yuan. How low a price you dare to haggle, how low a price they dare to sell. Several astute Shanghai girls were flabbergasted by this. 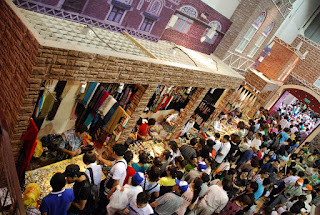 A no-line pavilion like a street market (Photo by Maple Xu)
Pavilions that did not have long lines didn't seem to be that interesting. I reasoned with my husband: "A long line must have its reasons. You don't want long lines, you don't get to see interesting things." He replied: "By your logic, shouldn’t Saudi Arabia be the most interesting one?" I was tongue-tied.

A conversation like this goes on all the time. It makes the Saudi Arabia Pavilion a legend, and a joke.


*
The next day, we again entered the Expo around 11 am. In the Europe and America Squares, the pavilions with lines longer than 4 hours included Germany, France, Sweden, Finland, US, and Canada. So they couldn't be our cup of tea. Other countries, such as Spain, Denmark, Ireland, Norway, Hungary, Russia, England, Italy etc. each had lines about 40-minute long.

Denmark's national treasure Mermaid was smaller and darker than I thought, but their freshly baked cookies were worthy of the name. The England Pavilion's contour had been enjoying media praise, and its look indeed was dreamily beautiful, but who could have guessed inside the pavilion there was nothing to see? When those who suffered backache from the long standing in line about to hurl angry words, wait a second, a clown wearing fake teeth and life buoy was grinning cheekily, ready to take a photo with you! For the Russia Pavilion we waited in line for more than 50 minutes; inside were only giant colorful vulgar plastic flowers. Speechless.

Worth noting is the Hungary Pavilion – one could tell the exhibitor's sincerity and thoughtfulness. In the Norway Pavilion, the smart and unrestrained structure, together with its wonderful background music, brought you calmness.

An unexpected reward of the day was after 10 pm. It drizzled, and visitors became sparse. Many pavilions had no more lines. We visited Romania, Finland, Austria, and Sweden, and enjoyed three performances of indoor music in close quarters. Perhaps because we were completely out of the burden of waiting in lines, those visits were a great pleasure.

There were at most 2% foreigners among the Expo visitors. I guess other foreigners were scared off by the long snaking lines. Who would like to do things that are completely inefficient with loss greater than gain? Only Chinese are this robustly patient, obedient, reticent, and complaint free.

To be fair, you shouldn't place all the blame on "Chinese's poor personal quality" for the Expo's unclean environment. Think about it: if you visit ten places a day, let's say for each you wait just one hour in line on average, that would still total up to a full ten hours of standing! Thirst, hunger, exhaustion plus extreme boredom made people eat non-stop mechanically. Trash cans and cleaning staff were sparse around the lines, no wonder food containers and wraps were littered all over the ground.

There were also people who cut lines, mostly women, who bravely pushed forward through the crowd. Curiously, few tried to stop them. Perhaps the men took pity on the women for their hard experience.

There were also fake handicap people and pregnant women going through the "green lane." Some "handicapped," after entering the gate, ran faster than a cat. Some "pregnant" squeezed a pillow into their clothes. One elder was followed by five young people who carried his shoes or cups. It is said that, to ensure fairness, "green lane" has been cancelled.

I kept wondering why the Shanghai government was so incompetent. On-line pre-registration would have solved the problem. The modern technology is there to settle these things. It can easily put limits on visitor flow on a daily and even hourly basis, whether for an individual pavilion or the entire Expo. Visitors didn't have to lose spirit and suffer foot ache from standing in long lines and then seeing nothing as a result.

But the Shanghai government doesn't seem to see the problem. They worry about only the visitor number and revenue targets. In early May, visitor flow was only in the scale of tens of thousands, and the government feared it wouldn't be the largest Expo in history, with the largest number of visitors as they have boasted: where to put their face otherwise? Therefore they gave away a large quantity of tickets, and organized county folk to visit with low prices. Now 400-500 thousand visitors enter everyday, they don't think about how to solve the problems, still only boast in big media outlets about exceeding harmony targets.


*
Our third day of visit was the most interesting. In the Urban Best Practices Area, various countries' conceptions of and plans for low-carbon life styles, environmental protection, and energy conservation were fascinating. And there were no lines. The only long line was at the China Petrol Pavilion. I heard it was because of a small movie. Weird.

In the Hamburg Pavilion, the German black beer and seafood salad were delicious! I especially want to praise those.

The special gain of the day was that, after 8 pm, on the way back we passed the Europe Square, and entered the France and Germany Pavilions with little lines to wait in.

My husband said that, in the three days, departure by 11 am, returning by 11 pm, it was often tiring and depressing, yet unforgettable to him were the three best meals of Denmark, Czech Republic, and Germany, respectively. All their ingredients were imported from the original country, and the chefs were native. The waiters, though did not speak Chinese, all had sunny smiles on their faces. Another important factor is that, because media did not hype it, those restaurants were usually quiet. When you enjoy the rare peace there, you will also find the food is not as expensive as you might fear, at least no more expensive than any of Shanghai's Western food restaurants. Perhaps those foreigners really just wanted to show their local pride, unrelated to money.

So we've decided to visit the Expo once more in the fall. Not going to any exhibition, just choose a Western food restaurant, find two window seats, sit down, have soup, fish steak and dessert, and do some blank staring. Don't you think this scene is rather harmonious as well?

Someone complained of having a problem leaving comments on my blog in recent days. Anyone else having difficulties?

Great writeup. I now feel I have had the pleasure of visiting the Expo without the pain.

I found your blog by searching for "Shanghai Expo experience" and I am glad to read about your experience standing in line. It is a witty article. Perhaps in October the crowd will diminish.