Monday night Bob and I had dinner with Jonathan Tel, author of The Beijing of Possibilities, in a Chinese restaurant named Chili Garden (川王府). This is one of the few truly authentic sources of cuisine in the area. (Numerous Chinese restaurants here advertise themselves as , but provide only dishes catered to American eaters who don't know what they are getting.)  Another authentic Sichuan cuisine is Red Pepper (重庆食府) on Rt. 9, which we go to most frequently, because it has a great chef and is closer to us.  Chili Garden and Red Pepper have different specialties and varieties; the dishes in both restaurants are mouth-watering. Not surprisingly, many of their dishes are cooked with hot peppers as the dominant spice. Try them for Thanksgiving if you want to go for something non-traditional. 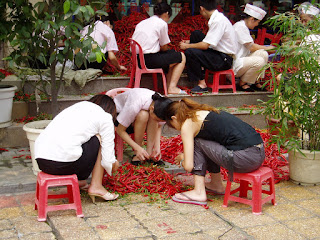 I had thought I was pretty knowledgeable about 's, especially 's, history. So much for my conceit.  One thing Jonathan mentioned during dinner surprised me: he said all chili peppers came from , and the Chinese history of eating chili peppers is only about three to four hundred years old.

I was suspicious; in my mind we Sichuanese had been eating hot peppers since time immemorial. Digging further after returning home, however, I had to admit Jonathan was right. Apparently, chili peppers migrated into China at the end of the 16th century, and the first written record of them was found in Ming Dynasty's '草花谱' ("grass and flower album"). They were called 番椒 ("fan jiao," meaning "foreign pepper") at the time. In Sichuan we call hot peppers 海椒 ("hai jiao"), which makes perfect sense to me now because 'hai' in this context means "overseas."

It seems only appropriate to have a post about food today. Tomorrow, for our vegetarian daughter's sake we are going to have a turkey-free Thanksgiving dinner. While Bob is going to cook all those traditional veggy dishes such as cranberries, sweet potatoes and beans, I will cook a Tofu dish spiced with chili pepper. Not your traditional Thanksgiving dish, but neither the turkey nor the chili pepper tradition has been going that long after all. The White House's hypocritical tradition of pardoning one turkey (and eating another) is even shorter. Anyhow, Happy Thanksgiving everyone.

I wish I knew that when I was still teaching in China--would've been amusing to see my students' reaction. Though I assume the "ma la" peppers are indiginous considering I've never seen them for sale anywhere except a Chinese market.

It also seems that the only authentic Chinese restaurants in the US are Sichuanese. We have a great one near me.

Ha! 花椒 (hua jiao) is definitely indigenous to Sichaun, I guess that's why it's called "Sichuan pepper" in English.

Hope you had a great Thanksgiving. We did.

That is not true. There are quite a few authentic Shanghainese restaurants in NYC Chinatowns. Unless, of course, you consider NYC is not part of US, which is not an unreasonable assumption.