The Ancient Battlefield at Bowang Hill

For this year's National Day vacation, our target was Nanyang City in Henan Province. There are many historical sites from the Three-Kingdom period (220-280) in this area, one of them the famous Bowang Hill (博望坡).

The three of us – my husband and I, plus our friend Shen – drove from Haikou to Henan. Shen is a Three Kingdoms fan. As we approached Bowang Hill, our usually taciturn friend became amazingly voluble, stories flowing out from his mouth like a running river.

It is said that, shortly after Liu Bei's three courteous visits to Zhuge Liang's thatch hut won the heart of the great war strategist, Cao Cao led an army of 100,000 to attack them. Liu Bei had only a few thousand troops, and he placed all his hope on Zhuge Liang's help. The two discussed strategies alone all day, leaving out Liu Bei's two blood brothers Guan Yu and Zhang Fei. Guan and Zhang did not trust the new strategist and were upset by Liu Bei's intimacy with him. With such a big disparity in strength between the enemy's troops and theirs, they didn't believe there would be any way for Zhuge Liang to defeat Cao Cao. But they were, of course, wrong.

Shen explained to me that, at the time Bowang Hill was a rugged area full of bushes and old trees. Zhuge Liang lured Cao Cao's army up the hill, then started a fire all around them. Trapped, Cao's soldiers could neither advance nor retreat, and most were burned to death. Thus Zhuge Liang easily won the first battle after taking up his official post as Liu Bei's adviser.

My heart couldn't bear the burning scene and I said to Shen, This Mr. Zhuge was too insidious and cruel.

What do you know? Shen glared at me, That's called war strategy. Further more, Liu Bei was defending himself; it was Cao Cao, the invader, who was on the wrong side.

Even so, I said, Need he have burned so many men? That was hardly a green strategy either.

Shen was so angry he could only laugh. Lady, he said, That was a time of cold weapons, what else do you expect? Available strategies were nothing more than fire or water.

At the point we had reached Bowang Hill. We chose an ancient post road crossing the hill from north to south. The road was over five feet wide, and we had learned that it was on this section of the road Liu Bei's army had ambushed Cao Cao.

Unexpectedly, challenge began as soon as our car got on that road. 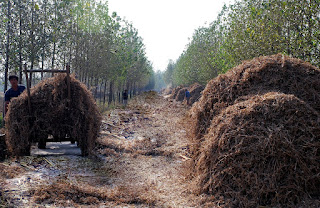 Bowang Hill (photo by Maple Xu)
It wasn't a surprise that the ancient path had been changed to a concrete road, however even Zhuge Liang couldn't have guessed that 1800 years later it would become the villagers' drying square. It was the season for harvesting corn and canola, and the peasants dried the stalks on the road in order to use them as fuel. Those stalks didn't just occupy part of the road; they were piled over the entire road like small mountains everywhere.

We had to look for the lowest "peaks" for our car to pass. The plant stalks screeched under the wheels and scratched the windows, and our car crawled slower than an ant.

Seeing the sun was about to set, I asked my husband to find a different path. He sneered, Obviously you don't know where you are! I looked around and realized that we, like Cao Cao's army, were trapped in a situation in which neither advance nor retreat was viable. There wasn't even a place to turn around.

The villagers not only were unapologetic for the trouble they created for traffic, they held their wooden harrows tight and angrily stared at the cars, as if to say, Did you city people eat so much that you have to come to our drying ground to burst?

My husband advised me to accept fate. Let's just crawl as we can. If you don't behave, that man standing over there might light up the stalks and replay the Bowang Hill burning scene.

Shen lost patience and started to yell. I consoled him that we should soon see a big ancient tree, the sole witness remaining from the Bowang fire battle. Who knows whether that tree is real or fabricated for tourists? He shouted.

I got out of the car to ask a few peasants about the tree. They looked totally lost, unaware what their place had to do with Zhuge Liang. An old man pushing a bike passed by and asked, Are you looking for the Three-Kingdom sites? There's nothing left except a dead old tree. It's still several kilometers away, not worth all your trouble.

— So the Bowang Hill's fire battle was real?
— What a question! Of course it was real. The old generation all know clearly about it. In the fields we often dig out dirt that was burned black. The young people don't know because they are only interested in making money today. Old stories are useless to them.
— Why don't you locals take pride in the history and preserve the old sites?
— What's there to be proud of? Zhuge Liang, he wasn't even a Bowang person. Spending money on a few broken old walls is not as useful as building a temple to burn incense, don't you think? All we peasants want is to farm well, and have a temple to pray for good weather. It's just a little inconvenience for you city people to come down and play during our busy season, right?
— Right.

Thus we never got to see the tree, or any relic from the Three Kingdoms time at Bowang Hill .
Posted by Xujun at 9:56 PM