On the long distance bus to Lugu Lake, two men sitting behind me had been chatting about "walking marriage." One man asked, "Mosuo men can 'walking-marry' freely, but they don't get to live with their children, wouldn't they be too lonely in old age? Who take care of them when they get old?" The other replied: "The abundant romance of youth, is worth the loneliness of old age. Everything has a price after all."

The two men did not know all the facts. Though Mosuo men live with their mother, and are not responsible for rearing their own children, they have the duty to help bring up the children of their sisters. In a Mosuo family, uncles are the decision makers on external affairs. They have an adage, "The biggest flying thing in the sky is eagle, the biggest walking thing on the earth is uncle." When they get old, their nieces and nephews attend upon them until their death. 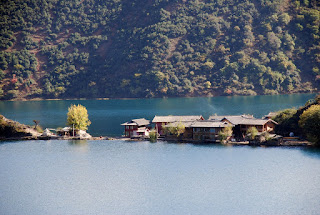 Lugu Lake
A friend once told me, his Mosuo friends couldn't understand why the Han people have terms like "lonely old widows" and "five-guaranteed households" (五保户"). They don't understand why Han families are full of domestic fights, even violence and family wars. Those are things they just can't imagine. The Mosuo people living along the Lugu Lake are proud of the auspicious and peaceful ambience in their family life; in this respect they think they are superior to any other race.

*
One morning I was photographing a sunrise at the lakeside, and ran into a bunch of tourists waiting for a bus to return to Lijiang. A fifty-ish northern woman was talking volubly. She said, "Yesterday I asked the young man rowing the boat, 'You sing and laugh all day, do you ever have an unhappy moment?' But he asked me back, 'What is "unhappy"?' I wasn't convinced and again asked a girl who was washing her hands in the lake, 'Are there times that you feel unhappy?' She replied, 'Unhappy? Why unhappy?'"

At this point the northern woman got very excited and raised her voice, "Look! They don't even know what unhappy means! They are always happy!" Her companion replied that nobody can always be happy. The woman argued, "They don't suffer extramarital affairs or property disputes like in our Han families, why shouldn't they be always happy?"

Her friend teased, "Sounds like heaven, then why don't you stay here?" The woman said seriously, "I really wish I were a Mosuo woman!"

That was the moment I understood why my friend has lived here contentedly for ten years.

*
Last night at my friend's teahouse, we warmed ourselves by a fire and chatted. The landlord came by, and I tagged him. "I have many questions for you," I said. He sat down by me and said good-naturedly, "I'm happy to answer any question." 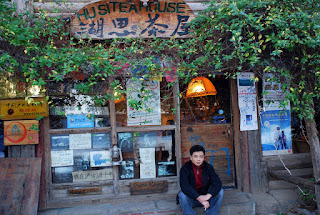 My friend's tea house on Lugu Lake
- First question: How come you and your wife live together? - That's because we have three brothers but no sister, and our mother died early. A family must have a woman as the household head; I'm the oldest brother, so my wife has to live here and take the responsibility of managing the family. Actually, "walking marriage" isn't the only form of marriage. There is another form: man and woman live together with either one's family. The principle is that the relationship is based on love, to marry by will, to leave freely. If the relationship is terminated, then each side returns to his or her mother's family. Unlike me, my two brothers are in walking marriages, and my youngest brother is the village head. - How did you decide on your wife? - Our love is no different from you Han people. When I was young I dated three or four girls. Only after I had children with my wife did the relationship become stable.- How do you end a relationship? - When the woman stops opening her door, or the man no longer comes in the night, the old relationship is ended and both sides are free to start a new one. It's all natural. - How does a woman's family view her man in a walking marriage? - The man comes to the woman after dusk, and leaves before dawn. At first he would avoid running into her family members. In the morning if you see sheepish men passing by, chances are they are returning home after a night of the walking marriage. The lovers will stay shy, even pretending not know each other on the street, before they have children and their relationship goes public. If you observe closely you will see that, in the night, no matter who knocks on a door, no one inside will open it for you, unless you shout out that you are an outside visitor, then an elder or a child will come. - Since a man does not have the legal obligation to raise his children, wouldn't that give men too much freedom and women too much work?

- Mosuo women are the happiest members in their family. The female house head has all the power, including control of property and money. Her siblings take care of the children together with her. Even in sexual relationships women take initiative. On the surface, men have all the freedom, but once he is rejected by his girlfriend, there's nothing left for him except a "spring dream." There is a Musuo adage, "Men's heaven, women's world."

- Could a man be walking-marrying to three women simultaneously? - (Laugh) Where does his time or energy come from? When I was dating my wife, we had a 20-kilometer distance between us. It was only because we were young and energetic that we lasted. Although there is no rule on how many walking marriages one can have, you must terminate one relationship before starting another. Custom and tradition do not allow two relationships simultaneously; an unfaithful man is going to be despised. This is no different from you Han people. - Would you enter another walking marriage? - Certainly not. What age does what things. Most Mosuo people settle down after they have children. Furthermore, I'm very satisfied with my present life. My wife is good in every respect! What he said made my thoughts fly to the Mosuo life style. All relationships are based on love. A big matriarchal family with tens of members is filled with joy and peace. Children are loved by multiple mothers. Elders calmly enjoy their final years with a loving family. In another thousand years, will we Han evolve to such an ideal state? But the vanguard Mosuo people already began the heavenly life 1500 years ago. #

What a wonderful piece this is. An well-written, intriguing peak into a different world. Thanks for sharing this Xujun.

Thank you so much for this insightful piece. The world has so much to learn from these people.

I never imagined this, and so close to Lijiang! thanks Xujun.

A very interesting, and often overlooked aspect of Mosuo culture:

"There is also a very important historical component which is often unknown to (or ignored by) those studying the Mosuo. Historically, the Mosuo actually had a feudal system in which a small “nobility” controlled a larger “peasant” population. The Mosuo nobility practiced a more ‘traditional' patriarchal system, which encouraged marriage (usually within the ‘nobility'), and in which men were the head of the house.

"It has been theorized that the “matriarchal” system of the lower classes may have been enforced (or at least encouraged) by the higher classes as a way of preventing threats to their own power. Since leadership was hereditary, and determined through the male family line, it virtually eliminated potential threats to leadership by having the peasant class trace their lineage through the female line."

Fascinating. I'd read references to such groups back when I paid more attention to the subject of anthropology but didn't realize (remember?) that there were still living examples. The Trobiand Islanders, whom Bronislaw Malinowski made famous, had an identical system (complete with uncle as child's authority figure) as did a number of other primitive societies that practiced hoe agriculture. Such peoples often feature female fertility goddesses and, incidentally, usually made the most beautiful pottery in the archeological record. That would be the Halaf in Mesopotamia. I think it also applies to China -- check it out.

Curiously the oldest written word for freedom in the human record is the Sumerican "amargi" which translates literally as "return to the mother." Since female goddesses are prominent at the deepest strata of archaeological digs in in ancient Iraq it is sometimes speculated that the last pre-conquest tribes in that area were matrilocal. (You also see what appears to be a reference to be matrilocality in the story of Adam and Eve, though it seems to imply the man would live with the woman's family instead of just visiting her at night. I may be wrong about this, it's been a long time since I did research in that area, and my memory is getting poorer by the month.)

Be that as it may mightn't this form of the family be a possible model for China's future? Wouldn't that be something! You wouldn't even need the men's permission; just stay at home!