I missed Ang Lee's Lust, Caution in the local theaters. Before finally watching the newly released DVD at home last weekend, I had already heard much about it. Even though I avoided reading reviews, words came into my ear from unavoidable friends. No surprise would have been left, or so I thought. 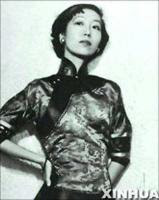 When the movie finished, I found myself in an upset state. I stayed up late trying to figure out what was so disturbing. It isn't the sex scenes that everyone is talking about; those scenes probably affect men more than women. It is the execution, or more precisely, the unshown, therefore seemly unfinished, execution of the students that include Mrs. Mak (Tang Wei). My unwriterly refusal to "see" the fact lingered until well after: isn't he going to spare her life, as she did his?

The rational and realistic answer, of course, is "no." We Chinese have a ready adage for this – "not cruel, not man," not to mention that issuing execution orders is part of Mr. Yee's profession. The question then is why I should be so shocked.

It is Tony Leung's melancholic eyes.

That night I searched on the internet and found Eileen Chang's original story in Chinese, in which the reputed 1940s author wrote the key reversal moment (my translation):

His smile at the moment is without the slightest irony, only a bit of sadness. His silhouette from the table lamp, his eyes cast down, eyelashes like rice-colored moth wings, resting on his lean face, and she sees tenderness and compassion in his look.

This man is really in love with me, she suddenly thinks. A bang on her heart, something lost.

The store owner hands him the receipt. He slides it in his pocket.

Nothing could have reproduced those subtle words of Eileen Chang's like Tony Leung's melancholic eyes. The incongruity of Mr.Yee's inside and outside is a source of shock. The man is capable of being poetic and cruel at the same time, and true to both, while the woman, in an inexplicable and critical moment, chooses to see only the former but not the latter. The very source of tragic consequence.

Interestingly, the story is only an artful and symbolic rendition of Eileen Chang's real love life. An extremely happening writer in 1940s , whose legendary life later ended with loneliness in 1995 , Eileen Chang's most-talked-about love was with Hu Lancheng. She was 24, and Hu was a 38-year-old married man. Like the story, he worked for the Japanese occupiers and thus was a "traitor to the Chinese." That did not matter to Chang. She was in love with the man, not his job. Unlike the story, their separation later was not due to political stance, but the man's infidelity. Yet his silhouette stayed with her for a long time.

Chang wrote "Lust, Caution" in 1950's , not long before she fled for fear of political persecution. There might have been a personal reason for the story's ending of Mr. Yee's betrayal and Mrs. Mak's destruction.

Though there are many modifications by Ang Lee of the namesake story, for example Chang pens no explicit sex scenes or violence, Ang Lee at least is loyal to Chang's original ending. The undisplayed execution has a deep impact on audience psychology. As long as we haven't heard the gun shots, our hallucination of humanity is kept alive. The longer the hallucination lasts, the harder the blow when it disintegrates.

Email ThisBlogThis!Share to TwitterShare to FacebookShare to Pinterest
Labels: arts and entertainment, writers and literature

wonderful reflection. I have not seen the film but I am moved by what you have written.

Maryanne, I hope you'll have a chance to see it and I'd love to know what you think.