An Overlooked Message of the Peter Liang Demonstration in Boston

On Saturday, Feb. 20, I walked in Boston Common about 11 am, in time to see a large group of Chinese Americans gathering by the Brewer Fountain in front of the gold-domed Massachusetts State House.  Behind the crowd, a man in a black ski jacket and a woman in blue jeans quietly placed a small, home-made memorial under a tree.  They carefully laid down pine twigs and flower bouquets on the lawn, and set up a cardboard sign with hand-written words:
"TRIBUTE TO AKAI GURLEY" 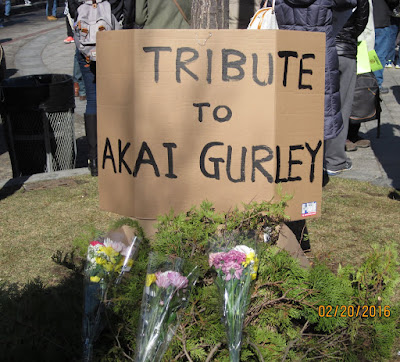 People came from as far away as Rhode Island to demonstrate in Boston, responding to former New York policeman Peter Liang's conviction.  The majority of the participants were middle-aged, and quite a few brought children with them. Led by a Boston University Professor named Wang Hua, the first thing the demonstrators did together was observe one minute of silence in mourning of Akai Gurley and as an expression of condolences to his family.
I watched them from a distance. I had decided from the very beginning to stay out of the mass rally, and advised my friends to do the same. In addition to personal reasons, I was also concerned about possible adverse consequences of racial tension. But I would be surprised this time.
My first surprise was that a friend, Hong Jiang, a former IT professional who had been skeptical about the rally early on, brought with her two hand-made placards. One read, "Condolences to Mr. Gurley's family," and the other "Fair Trial for Peter Liang."  She said she decided to get involved because she really didn't want the rally sending the wrong message to the public.
As it turns out, these were the two main messages of the rallies across the country that day.  Sadly, however, the mainstream media, and many in their readership as well, seem to have seen only the second message or, worse still, to characterize the demonstrations as a  "square-off" between the Asian and black communities. Few recognized that the Chinese American community as a whole has emerged from its customary quietness to make a collective bow to the victim's family, to express regrets and sorrow, to issue a profound apology, and to acknowledge the failure of Liang's defense team for not delivering an apology until after the verdict was read. Such a collective apology is something unheard of in the 190-year history of Chinese Americans. 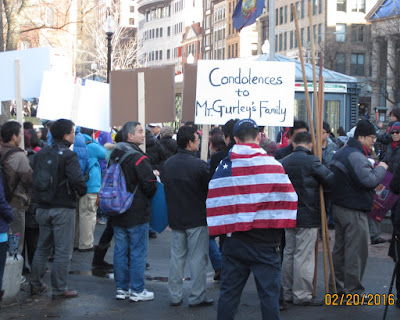 The consensus on apologizing was not manifest at the outset. On WeChat, I early on saw an ambivalent question: Are we begging for leniency? In the week between the verdict and the demonstrations, I watched on my cellphone people debating passionately, sometimes fiercely, on whether mass rallies should be held and how.  There were no authorities anywhere; anyone could propose any idea, and people took or rejected ideas at their own discretion.  Despite endless arguments, some sort of convergence—though in no way unanimity—did seem to appear at the end. One example: inappropriate slogans such as "Support Peter Liang" stayed around for a while but were ultimately rejected by the majority.  "Support him for what? For shooting?" the question from a random person had made others think twice. 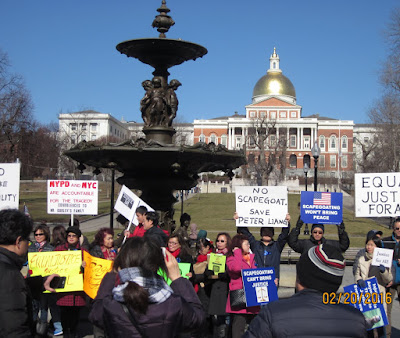 As a rookie cop, Peter Liang made a grave mistake on the evening of November 20, 2014, on the 8th floor of a dark stairwell in a Brooklyn public housing complex, when a bullet discharged from his gun, ricocheted off the wall, and fatally struck Akai Gurley one floor below. Though all evidence points to the fact that neither man was aware of the presence of the other at the time, and that even the victim did not immediately realize he himself was hit until he ran down two more floors and collapsed on the 5th floor landing, Liang, as well as his partner, made a further mistake by not performing CPR for the dying man after they saw what happened minutes later. While Liang's defense team had argued that a devastated and not well trained Liang was incapable of handling such a crisis, an unarguable fact is that a young man's life was lost because of him, and for that Liang must bear the responsibility.
Yet it is also a fact that the tragedy was a horrible accident, made even more tragic by the extremely low probability that a ricocheting bullet would strike someone in the heart. As Ken Thompson, the Brooklyn DA who prosecuted Liang, said in a video interview on Feb. 19, the day before the demonstrations, "I do not believe that Peter Liang intentionally killed Akai Gurley. We have never said that."
An accident is not the best example of evilness. An individual who caused an accident without intent should not be symbolized for political causes or be given the harshest punishment. As far as I can tell, this is what pushed Chinese Americans to the streets on Feb. 20. But as they sought fairness for a member of their own, it also became clear to them that "fairness" might not mean the same thing to those on the side of the victim. Thus, as a grassroots movement, the Peter Liang demonstrations ran into a dilemma. That dilemma, embodied in the two slogans carried by my friend, also became part of the rallies.
On the grass of Boston Common, I asked a demonstrator, who identified herself as a housewife, why she brought her children here.  She replied in Chinese, "I want them to know we are a minority. They have to know that unfair things happen to us because we are a minority." She paused, and then added somewhat ambivalently, "But we don't want our black friends to think we are against them. They are a minority too.  We are both disadvantaged groups."

A park ranger on horse attracted children who came with their parents. The kids wanted to pat the horse.  They wanted to take pictures with the handsome policeman. 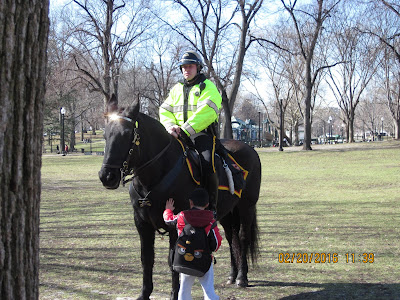 I couldn't help but wonder: when Peter Liang, at age five, witnessed her mother being robbed on the street, and vowed to protect her when he grew up, was it the mighty image of a policeman like this that inspired his dream career?  How could he have known there's so much behind a beautiful image!

By the Brewer Fountain, a woman speaker stood on a bench and called on Chinese Americans to actively participate in public affairs. The crowd responded with foot stamping while shouting in unison: "Vote! Vote! Vote!"  Hong Jiang, who became one of the provisional organizers with the BU professor, spoke next.  She told people to care not only about our own community, but also all other minority groups.
After seven or eight men and women made impromptu speeches, people began to sing "God Bless America."  A man with a singer's voice held a megaphone and led the chorus. I was surprised that many remembered the lyrics; those who didn't hummed along.
As the demonstrators paraded along the outmost ring inside the large park, the procession stretched for more than half a mile. I asked the park ranger on horse how many people he thought there were.
"More than 2000," he said, impressed. "I thought there'd be 50.  That's the estimate on the permit."
"Is it okay there are so many?" I asked.
"Oh yeah, " he said, "perfectly fine. It's a good thing." 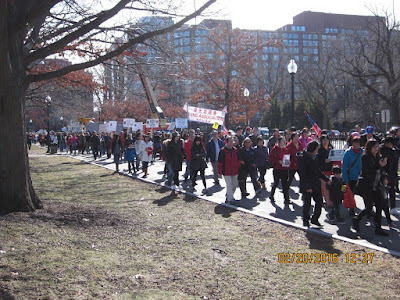 The parade marched past my camera, shouting slogans. Suddenly, a white man standing next to me in the audience ran to the parade and stopped a woman holding a sign, on it were the words "Free Peter Liang."
"Where is he being held?" the man, who later told me his name was Ed, asked her. The woman looked puzzled. Several others came around and tried to explain, but Ed cut them short. "You can't ask to free someone who's not being imprisoned," he said.

This slogan, in fact, had been one of those deemed inappropriate by most—albeit for different reasons than Ed's—during the WeChat discussions before the demonstration. Many seemed to want leniency for Peter Liang, not exactly "free," but unsure what term would be fair.
I spotted another friend, also an IT professional, at the tail of the parade. I asked her why she came to demonstrate. "If we didn't," she said in a Sichuan accent, "Peter Liang would be locked up for 15 years!"
Posted by Xujun at 7:48 PM 1 comment: