My comment on : however lackluster the outcome, it is progress in world civilization when countries fight over environmental issues instead of killing each other on account of ideological differences. Finally, governments are recognizing that we humans have important shared concerns than trump ideology. Too bad it looks like it will take ever escalating world crises for something to really come of this.

On a related topic, the New Yorker has an interesting report by Evans Osnos titled "Green Giant: Beijing’s crash program for clean energy." The most fun part in it is the author's experience with e-bikes, an effective, clean and low-cost alternative to automobiles. At an e-bike shop:


The manager rang up the sale, and I chatted with two buyers who were students at the Beijing University of Aeronautics and Astronautics. “You must have tons of these in the , because you’re always talking about environmental consciousness,” one of them, an industrial-design major wearing a Che Guevara T-shirt, said. Not really, I told him; American drivers generally use bikes for exercise, not transportation. He looked baffled. Around his campus and others in , electric bikes are as routine as motorcycles are in the hill towns of .


And after Osnos purchased an e-bike of the brand Turtle King:


I threaded through an intersection clotted with honking traffic, and the feeling, I discovered, was sublime. The Turtle King was addictive. I began riding it everywhere, showing up early for appointments, flush with efficiency and a soupçon of moral superiority. 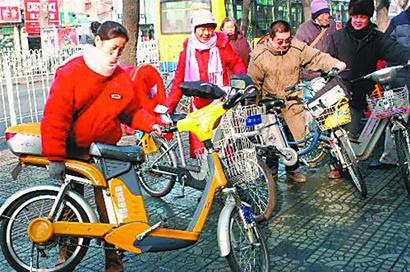 look at all these e-bikes they are riding...


I suspect I myself might be credited with early reporting in English on Chinese e-bikes :-). Nearly a year ago, I wrote the following in my review of James Fallows' Postcards from Tomorrow Square:


The cement plant case is only one of those homegrown, and very creative, "green" efforts popping up across the country. I've seen others during my annual visits to . One of my favorite examples is the electric bicycle which I first saw in several years ago. These are popular with people who want more than a bicycle, but can’t afford, or don’t want to deal with, a car. And there is not just one kind. There are lots of different brands using different kinds of components. Nobody is waiting for the right battery. They just make the things and try, apparently successfully, to sell them. Some look like junk, some look pretty good, but they are out there and being used.


Don't underestimate those home-made e-bikes in . Grassroots innovations like that might save the country, and their neighbors, from a worse environmental disaster.

By the way, in that same review, I had an in-passing criticism of a NYT columnist's opinion that " can’t have a greener society" because of its one-party system (this doesn't mean I like the system - I don't). Apparently I had pissed off some readers with the criticism, which is understandable. Curiously though, a year later in another op-ed the same columnist made a 180° turn toward 's political system. No doubt he is sincere in both articles. I'm just not sure what made a Pulitzer winner flip-flop like that, except perhaps that he was writing about a country he did not really know.

Email ThisBlogThis!Share to TwitterShare to FacebookShare to Pinterest
Labels: China and Chinese, economy and environment

The problem with having the e-bikes in the US is that we'd be required to have a license to ride one. I'd certainly buy one if they were reasonably priced and easily available here.

Not true, Matthew. But the legal e-bikes here in the US are predominantly pedal-assist bikes with a speed cap of 15-20mph, not the electric scooters that masquerade as e-bikes in China.

That said, I have a (technically offroad) 1000W Tidalforce bike that can go 30 mph on the flats and helps me climbs most grades at close to 20 mph.

I went to a local Carrefour in Shanghai and these e-bikes are as low as 1200 yuan. Too bad they don't make them here in the States otherwise I would buy one.

Interesting question about license requirement - I hadn't thought of that. I think e-bikes are not popular in the US because the average wealth and comfort level is high here. Things may have to get a lot worse before Americans consider adapting alternatives like e-bikes. It's possible though.

And you do mention the "they just go out and try the batteries". You do realize that these things are partly so cheap that they use very old fashioned and environmentally harmful lead batteries. The battery technology that is more advanced is damn expensive. On different note: e-bikes are a menace. Chinese don't seem to care about traffic laws anyhow and combine that to the fact they drive without lights any time of the day and the bikes make no noise, us pedestrians are always in danger. These are fast big heavy maschines man ytimes, not those speed-capped things we have in the West.

E-Bikes might be great if you're in a temperate climate...certainly not New England in the winter. Think snowy Maine on an ebike...not a pleasant thought.
Moi - I prefer my closed heated seat Honda, with baseball talk on the XM radio.
Now THAT'S civilization...
Good Ole Charlie

Guys, thanks for the comments. Sorry about the late response as I've had a very busy Christmas with my family.

I should add that the New Yorker article mentioned shortcomings of e-bike as well, and no one said it's a perfect alternative (which is probably non-existent anyway). However, given the Chinese people's living condition and the country's infrastructure and environment, an e-bike is certainly a good and practical alternative to a car.