(Note: Whether or not you agree with statements about and Tibetans cited in this post, please refrain from hostility. Personal attacks will be deleted. Readers who have followed Maple's travelogues before know by now that she hardly concerns herself with any political topic. She has always been "an apolitical person" as she puts it. She has simply written down what she saw and heard.


Maple wrote this piece long before the July 5th Xinjiang riot; I just didn't get the time to translate it sooner. In the process of reading and translating it, I recognized a major difference between the Tibetans and the Uyghurs: the Tibetans have a history of serfdom while the Uyghurs don't. This factor might well be playing a role in their different attitudes. – Xujun)
[in translation] 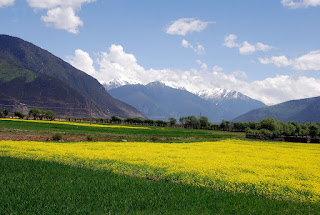 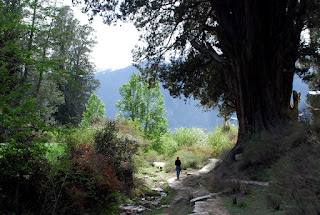 The cypress park in Nyingchi (photo by Maple Xu)
Here and there in the tree shadows were a dozen or so elementary students, looking to be seven or eight. They were either kneeling at a stone bench writing homework, or reciting from textbooks in crude Mandarin. The tourists chatted with them and praised their diligence in studying. A while later, the Tibetan children asked in a sincere tone, "Uncles and aunts, do you have a pen? Would you like to give me a pen?"
The tourists were taken off guard. They searched their own pockets, but only two people had pens with them. The rest of us felt apologetic: the children just wanted pens to do their homework, it would be a shame not to satisfy their small request. So, one after another, people took out their money, one yuan, two yuan, five, ten. They told the children to go buy a pen and study well. The kids accepted the money, and politely thanked us with a bow.
In the entire time, Phurbu did not utter a word. He watched the whole thing with a stern face. 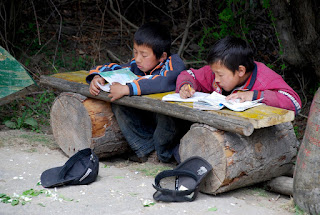 Tibetan students in the cypress park (photo by Maple Xu)
I saw another seven- or eight-year-old boy was riding a broken bike circling on an open spot. Seeing me approaching him, his sun-reddened face beamed. He shouted, "Be careful, my bike does not have brake!"
"How come you are not doing homework like the others?" I asked.
"I finished a long time ago," he replied proudly.
"What's your name?"
"Phurbu."
Both the big Phurbu and I laughed. Next, our tour guide asked the little Phurbu a surprising question: "You didn't beg for money, did you?"
The little Phurbu answered quietly, "No."
The big Phurbu sighed; for the first time I saw a helpless expression on his always cheerful face.
"You mean that was their trick to beg for money?" I asked.
He nodded, "Always."
I felt lost. The little Phurbu suddenly ran up to a hill. On top of the hill he began to sing a popular song,

"The Road to Heaven." The big Phurbu joined the singing, his thick voice and the boy's childish thin one in perfect harmony.
When they finished singing, the tour guide Phurbu shouted, "Good boy, Phurbu!"
People clapped. A tourist said, "Why did the boy run so far away to sing? Otherwise we could pay him a bit of money."
The big Phurbu again shouted, "Good boy, Phurbu!"
My eyes went moist for no reason. I remembered once when I asked Phurbu how he positions himself in the world, he replied:
"A Tibetan."
Posted by Xujun at 4:16 PM

This is a great post. Wish there were more tour guides around the world like him. Only good ones I've ever had were for private tours (and only one of those was in China).

I'm sure your sister is a very sincere person. Sorry, I don't know her other posts so can't judge but your blog is good, so I'm imagining that her work is very important.

There are two things that stand out for me from this report.

2. I believe the Dalai Lama has called for Tibetan autonomy not independence. It's strange that a Tibetan would report that the Dalai wants independence. Did your sister happen to ask him about that discrepancy?

My most sincere thanks -

@Anon: thanks for your questions. My understanding is that Phurbu works part-time for a commerical travel agency, not the government. But I will verify this with my sister again. About your second question, it is a common view among people inside China that what the Dalai Lama really wants is independence. Bug again, I'll forward your questions to my sister.

Anon, I have received a reply from my sister. I'm translating it word for word below:

[I don't know much about political issues; I write intuitively according to what I see and hear. I'm not sure if I can answer the questions correctly. Does the reader think Phurbu is the government's nursery child? If so this [exchange] becomes uninteresting.

I can answer that, China's travel agencies are mainly civilian, among them joint-ventures and privately-owned companies. They might be affiliated with different organizations; though they are all managed by the National Tourism Administration, the agencies themselves are not government units. Even the state-owned travel agencies such as 'China Travel' and 'Youth Travel' are just enterprises. Every tour guide they hire is freely obtained from the society at large. The tour guides come from all different places, and they are not officials. Other than the programmed site-seeing introductions, what they say represents their personal views. Why am I so clear about this? Because I worked as an accountant in a travel agency for three years.

Re: 'The Dalai Lama has called for Tibetan autonomy not independence.' This I'm really unclear about. My understanding is his purpose is independence. Tibetans seem to understand this more or less the same way as I do. As early as 2002, when I traveled to Shangri-La, a Tibetan driver Zhaxi told me he opposed Tibet independence, and he also said good things about the CCP and bad things about the old Tibet. At the time the term 'Tibet- independence elements' ('藏独分 子') did not exist yet. Why did Zhaxi say what he said? The only explanation is that they think the Dalai's return would mean Tibet independence. They are not the spokespeople of the Foreign Affairs Ministry, the words they use seem normal to me, they are not formal or official sounding.

I think Phurbu and I have congenial personal interests, and in our chat he spoke his mind.]

By the way, Anon, I understand your suspicion. At first I was a bit skeptical as well, however I trust my sister's judgment about Phurbu's sincerity, which makes this travelogue all the more interesting. – Xujun

My sister tell me about this blogge and this report because both of us curious about China and China thinking in regard to Tibet. Please google "Dalai Lama autonomy Tibet" and you find many article. Not independent, autonomy. Here is example in Wall Street Journale: 'It's Not Hard for China to Satisfy Tibet'. Chinese insist he says independent but not.

I know what the Dalai Lama says. The problem is most Chinese don't believe what he says. It is a very difficult situation. I'd rather see the two sides sit down and talk and actually get some results.

Since saying anything else is tantamount to sedition, I am going to say that the guy's comments aren't necessarily to be taken at face value. Every Tibetan has been fed Chinese propaganda as mother's milk. The average Tibetan has no clue if your sister is a government agent. Even if your sister weren't a government agent, she has the option of having the guy put on a watch if he made any anti-government statements. Let me put it this way - if I were this guy, I would echo the party line. Any country in which your statements can lead to imprisonment or execution on sedition charges is going to be one where no one makes statements (especially on issues like Tibet) that can be interpreted as seditious.

Zhang Fei's comment above echoes my own experiences in a discussion with a former PLA soldier. She told me that whatever her opinions were, when "certain people" inquired as to her opinion, she knew that she had to give the party line. Her reasoning was, what was there to gain by exercising any independent thought?

This man, no matter what he said, was no more than an entertainment for your sister, and for every other tourist he encountered. Long after they have gone, he will need to live there, with the repercussions of what he has said and done in a country where the only place your thoughts are safe is in your head, unseen and unread by others.

Well, my sister felt the guy was sincere, and I suppose her feeling is more trustworthy in this case because she, not you, was the one who talked to Phurbu. Also note that Phurbu said something against the government's propaganda as well.