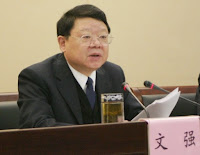 Sina.com reports that the news was posted by someone on Sina early on the morning of August 7th (that's one day ahead of any official media outlet), and people distributed fliers on the streets to celebrate the arrest, some even lighting up firecrackers.

Posts on 's commercial web portal cqnews.net say that "actually people all knew that the biggest boss of organized crime was Wen Qiang; it's just that nobody dared to say it." This echoes a local policeman's words that "I heard a lot of rumors about his ties with gangs as early as 1999" in Global Times's report. I myself have seen internet comments last year that said in "police and criminals are one family", with Wen in charge of the police.

One would wonder why, then, only last July Wen was promoted to be the city's judicial bureau head, moving up from his previous position as the deputy police chief. Interesting enough, the man who replaced him at the police bureau last year, Wang Lijun, is the exact person who made Wen fall this year. Wang Lijun, now the police chief, had been hailed as a "fighting-underground hero" even before his transfer from his post to . "Someone counted that, during his 20 years as a policeman, he and his comrades have sent more than 800 criminals to court." I suspect that the coincidence between the two men's tr

ansfers and promotions was already part of an investigation scheme into Wen Qiang's crimes. It might have been a strategy to "leave someone at large to better apprehend him."

During my visit to early this year, I frequently heard taxi drivers express their admiration for Wang Lijun, for his zero tolerance toward organized crime and his effective means in crushing it. "The powerful dragon can't outdo the snake in its old hunt," goes a Chinese adage. Apparently this one needs to be rewritten. In modern times, probably only an outside dragon can overwhelm a ferocious local snake.

The problem is that an outside dragon doesn't usually stay long. People are now worried that Wang Lijun will depart for a new position before the underground organizations are completely eradicated. I have heard the same worry expressed for Bo Xilai, 's Party Secretary and Wang Lijun's solid backing. After his sympathetic handling of the taxi strike last November, rumors spread that Bo would soon leave, though he's still there today.

Officials like Wang Lijun and Bo Xilai are often referred as "blue sky" (青天), an ancient concept referring to a just judge or upright magistrate. Unfortunately such individuals do not occur that frequently, in history or in modern times. A system, not just individual do-gooders, is needed to better protect citizens.

It is quite dramatic for a police chief to shoot a judicial chief off his horse. It certainly is another credit of Wang Lijun the "fighting-underground hero," but can the same be said for the justice system?

By the way, there was no underground crime in Mao's era, though also there was no shortage of collective poverty. Can the Chinese people ever get both wealth and public security?

I completely agree that we need a system and not just rely on "heroes". One of the things about Chinese culture, and this occurs in many other cultures as well, is the implicit recognition that there is crap and there is excellence, and there's nothing in between.

What I mean is that people (esp. netizens) pick out something that they see as evil, and suddenly "all XXX are evil!" Or they pick out something as good, then suddenly if you're not "good", you're "evil". An example is the series of "tie gongji" "iron rooster" incidents after the Sichuan Earthquake, where people listed out the businesses they believe haven't donated enough and managed to destroy some over night. I'm all for charity, but it loses meaning when that charity is a result of force and humiliation. Charity is a virtue exactly because it is beyond what is "standard" behavior. A lack of charity may be disappointing some "expectations", but is within the rights of an individual.

There is a distubing lack of awareness in terms of what is "average", what is "standard", what is "expected", what is "ethics" versus "morals", and how all those things differ from what is "good" and what is "bad".

This lack of awareness carries over into politics and policies. The current system relies on officials to be "good"...whatever that means. The ironic thing is that everyone "knows" that "all officials are corrupt". So there's an incredible incongruity that is only the beginning of many problems. It's essential that a system be developed where it doesn't matter whether people are inherently "good" or "bad", but where incentives align so that most people can at least follow "standard" without much trouble and inconvenience.

It's not so much that the system is better and more perfect than the individual, but that a well-engineered system can be more objective and comprehensive than any individual. Paradoxically, more individualism can thrive in a context that is reliant on a system rather than in a context reliant on an individual.

On a more incentive-based level, the incongruity and lack of awareness of shades of gray between black and white, is hurting the same people who are "heroes". Take Bo Xilai and his son Bo Guagua for example. Why shouldn't BGG attend Oxford and enjoy his life there? Well, of course it's because his father is a Communist! The fact that he can make it in must indicate that the family is corrupt and use their connections! The fact that he's not saluting the wuxinghongqi in all his pictures and instead partying up like any other 20 year old must be because he's a hypocrite! That he is more vocal and public because he enjoys his father's influence, that he "doesn't want to be a politician or a businessman" because he can is a spoiled little rich kid and can afford to say such things.

I don't know. It's a different perspective at the problem and it arrives at a similar conclusion. I think the mainstream perspective has been said often enough, and this BGG story has been bothering me all day. So there you go.