[Note: I started writing this for NAM on Tuesday. Realizing the timing conflicts with all the coverage of the election news, I waited until Thursday to send in the piece. I was hoping it would get published Friday, but am happy enough it showed up Sunday instead of Monday.]

This week began with shocking news from my hometown. On Monday and Tuesday, an unusual taxi strike swept through all the streets in the urban area of Chongqing, one of the largest cities in China. While international reporters found excitement, local media worried about the city's image, residents experienced inconvenience, and the cab drivers on strike were angry and desperate. My biggest concern was how the city government would react. Never an optimist, I always fear the worst. 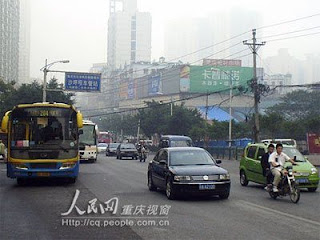 Monday, Nov. 3rd: no taxi can be seen on Chongqing's streets (people.com.cn)
I visit Chonqging about once a year, and the taxi is my primary means of transportation in the city. With a writer's habits, I always chat with the drivers. During all these years I don't remember meeting a single cab driver who was content. I learned that many of them were laid-off factory workers. They were bitter with the factory management who sold them out, and, after losing their familiar jobs, driving a taxi is one of the few options left to them to make a living. They complain that they have to make unreasonably big daily payments to the taxi companies, often more than what they collect in fares.

Last year, when I visited Chongqing, I saw a long line of taxies waiting on a street with no passengers around. Chongqing's taxies mostly use compressed natural gas (CNG), and filling up is apparently a slow process, hence the long lines. I remember the tank takes about half of the car's trunk, with insufficient space left for passenger luggage. It is always a challenge to fit in my bags at the airport.

Knowing how hard it is for the cabbies to make a living in my hometown, I often try to pay a bit more than the regulated fee. When I do this, my sister blames me for "upsetting China's market prices." Still, I had never expected a strike. Strike is just not something that happens often in China. The consequence could be dire. Unlike Western countries, there are no unions to represent workers' interests. There is only the official union in state-owned factories, no different from any other government agency from the perspective of workers.

In the early morning hours of Monday, November 3rd, however, passengers in Chongqing waiting to go to work by cab were the first to discover them missing from the streets. At the same time, some drivers unaware of the strike, were stopped by their colleagues. Tempers flared, and some 20 to 30 cabs had their top lights smashed, according to reports.

Within hours, several national outlets of the official media, such as China Daily, Xinhuanet.com, and People.com.cn, published the first eyewitness reports, which included interviews with taxi drivers and customers alike. The frankness of those reports surprised me.

While it was good to see a refreshing departure from the familiar bureaucratic style of official news, the real journalism approach was certainly not as widespread as I would have liked. On the same day, another official agency, China News, published a curt and rigid briefing of the situation, in the usual manner that conceals as much bad news as possible. It opens with a description of the all-city strike as "a partial number of taxis that met with obstruction and were unable to operate normally." It ends with the conclusion that "by 4 pm of [November] 3rd, 1,000 taxies had resumed operation," with no mention that the total number of taxies on strike was about 9,000. The strike, in fact, went on for another day, through Tuesday. It was not until Wednesday morning that the government announced the full resumption of normal operation of all taxies.

On Monday, when I searched to see how Chongqing's local papers reported the incident, the only thing I found was the curt report from China News, reprinted in Chongqing's Morning News.

Meanwhile, I watched on-line with great concern as the incident unfolded. The city government reacted quickly. An urgent meeting was held Monday morning, and police began to investigate. When cctv.com reported Monday afternoon that the Chongqing Bureau of Roads and Transportation Management said "a small number of individuals controlled this all-city strike," the familiar gun-powder scented term "a small number of individuals" made me seriously worry about violent conflict. That term had preceded every crackdown and wave of large-scale arrests following mass demonstrations in China.

Instead, on Tuesday afternoon, the spokesman for the city government acknowledged that the main cause of the strike was the recent "illegal increase" in drivers' daily fees to the taxi companies. Consequently, the government ordered the companies to reduce the fee to last year's level. The spokesman also promised to increase the supply of natural gas in response to the complaints that the cabs had to wait for hours each day to refill.

The tension eased after this, and the cab drivers gradually returned to work. I communicated with friends and relatives in Chongqing, and they assured me the crisis had passed more or less as reported. What a relief.

On Wednesday morning, however, I was again alerted by a headline on sina.com.cn: "Chongqing taxies completely recover operation; unlawful elements arrested." Unlawful elements? Another term smelling of gun-powder. I know my Chongqing townsmen. They are upright guys with firecracker tempers and soft hearts. They might have broken someone's top light in anger, an anger that, as a cabbie relative put it, arose from an "unbearable" situation. But they are hardly unlawful elements, and wouldn't have taken the risk except out of desperation. I certainly hoped no one would be thrown in jail.

A careful read of the report, however, indicates inaccuracy of the headline. The spokesman said the government caught some people hitting top lights on others' vehicles, and was "educating and admonishing" them. The government also apologized to Chongqing's people for its ineffective management of the taxi industry. Another thing one doesn't see happen very often.

The latest news was that, at 10 a.m. on Thursday, a top leader held a televised meeting with representatives of the taxi drivers and citizens to discuss their requests. Bo Xilai, who is not only the Party secretary of Chongqing but also a CCP politburo member, listened to the drivers' grievances for three hours (China Daily). This was a gracious move and I applaud it.

I wasn't satisfied that, in the press conferences, the government spokesman kept using the China News expression that "taxis met with obstruction and were unable to operate normally" in describing the strike, though he did abandon the qualification "a partial number."

He also failed to acknowledge that the root of the problem, as many folk analysts active on the Chinese cyberspace have pointed out, lies in the system itself. That is, the government has delegated the power to taxi companies to issue operation licenses. While the only way for a driver to obtain such a license is to become an employee of a taxi company, there is no mechanism to prevent the company from exploiting the driver.

But my overall reaction is relief. I'm relieved by the peaceful ending of the strike. I'm relieved by Chongqing government's benign willingness to solve the problems. Evidently, China is changing. It would have been better if the government noticed the problems before an extreme measure like a strike had to be taken, but that might be too high an expectation of any government.
Posted by Xujun at 2:28 PM