What A Free Life 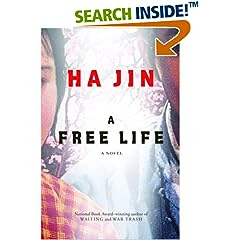 A book review by Xujun Eberlein

A couple of weeks ago a Chinese friend – an IT professional and an avid reader of fiction – dropped by and saw Ha Jin's A Free Life open on my kitchen table. "I couldn't even pass 30 pages," she commented on the 670-page novel. When I asked why, she said, "It lacks taste - no salt, no flavor (无盐无味)."

I could hardly blame her. I missed the days when I immersed myself in Waiting, which has one of the most captivating openings of all novels: "Every summer Lin Kong returned to to divorce his wife, Shuyu." What a smart opening line! When the reoccurring time modifier "every summer" is applied to the singular action of divorcing one wife, you sense a great yet subtle emotional drama ahead. That opening not only whets the reader's appetite but also provides the fundamental key to the entire story. And I was never disappointed as I was drawn in the beautiful language and emotional depth of Waiting.

But gone is the beautiful language; gone is the emotional depth. The now Ha Jin is no longer the then Ha Jin.

"I honestly wanted to write a letter to tell Ha Jin – you need an editor!" my friend later added another comment on A Free Life.

I had started reading several months ago with the intention of writing a thorough review. Soon I found it hard to will myself to turn the page. I don't believe in reviewing without finishing a book, and I had every intention of writing a positive review. Perhaps the book would get more interesting next page, I kept telling myself.

To make the laborious reading a bit more bearable, I placed the book in a fixed position on my kitchen table and set my eyes upon it for 15-20 minutes every day while eating lunch. It took me three months of eating to finish reading the book. When the obligation finally ended, it came as a true relief.

As I began to pen a review, I realized there weren't many positive things I could say. What could I praise, really? That at least half of the 670 pages could have been easily cut? That after a while you got eye sore seeing Nan Wu's bad pronunciation such as "zer" and "zat" repeated on every page? That, after you've read four or five of Ha Jin's novels, you finally realized all his male protagonists have exactly the same weak boring personality, as if cast from the same mold despite different names, and you began to wonder if the author is capable of creating anything new? That when he uses the same sentence pattern such as "if only he had…" on every other page, you can't help but wish if only the famous author were able to write with a bit more sentence variety? And if only the characters had not been so flat and fragmented, and if only the plot had not been so dreary…

Two questions have been bothering me since I finished reading the book two nights ago. One, why such deterioration in Ha Jin's writing? Two, what made the characterization in A Free Life a failure?

I suspect the answer to the first question is a simple one: success has overwhelmed the author. In A Free Life Nan Wu, the protagonist, thought of an artist friend's new work: "They reminded of a Chinese buffet that offered numerous choices, none of which was refined or sumptuous. Obviously Bao,cashing in his own success, had diffused his energy and lost his creative center." How ironical that Ha Jin wrote this passage.

And the characters in A Free Life – "none of which was refined."

Years ago a writer friend recommended the National Book Prize winner Three Junes by Julia Glass to me. I asked my friend why she liked the book. She gave that some thought and answered, "I just really cared about Paul." Paul McLeod is one of the main characters in Three Junes. I thought that was an excellent reason.

Borrowing my friend's reasoning, A Free Life failed to make me care about any of the characters. Using the author's own words on a character's paintings, "They don't have enough life in them." You would've thought 670 pages would provide enough space for in-depth characterization, especially when the entire book is focused on one man.

The protagonist, Nan Wu, is a boring yet judgmental and selfish character who does not love anyone in his family – not his parents, not his wife, not his son. And there is no friend he doesn't disdain in someway. But a character full of flaws is not the problem. My own characters are full of flaws. The problem occurs when Ha Jin tries to make Nan Wu a more sympathetic character than he actually is, and provides justifications for him on conceptual basis rather than using in-depth depiction. In the novel Nan Wu is artificially given high moral grounds: despite his unloving nature, he is dutiful to his family; despite his indifference to anything but his own desires, he chose to make "honest living" by running a restaurant; despite his deep grudge toward his native China, he maintains the traditional Chinese virtue by being a responsible family man. Those high moral grounds, however, come without roots or basis and thus are not convincing.

And consistent with the protagonist's self-centered characteristics, none of the supporting characters are shown with any depth. All fall flat to the floor.

It's not that Ha Jin did not have a chance. There is one powerful scene, the only one that actually touched me. After Nan Wu had beaten up his young son he became ashamed and asked the boy to call police to arrest him for child-abuse. The boy refuses by holding the telephone tight while crying. Reading that scene made me want to know more about the boy and his true feelings toward his father, however the boy virtually disappears from Nan Wu's (thus the author's) sight and thoughts after that. Then, when the author mentions the son again in passing, the boy has become a remarkably good young man. Except we readers are deprived of the joy of knowing how that has happened.

A Free Life has been named by reviewers as Ha Jin's most autobiographic novel. Ha Jin has also mentioned in various speeches that much of the details, with the exception of the restaurant experience, are based on his own life. The author's motivation to justify Nan Wu is, thus, somewhat explicable. However, one would expect an accomplished novelist like Ha Jin to know better than to impose forced virtues on a flawed character. As a result, even though most of the details of Nan Wu's life ring true, the character is dead flat. As another friend commented, "Nan Wu is selfish, yet not selfish enough to be interesting."

A final note just for your amusement: Last November, the Times Sunday Book Review published an article titled "Pleased to be Here," which hailed A Free Life as "a serious patriotic novel." What an honor. Not even the young Chinese immigrants who died as US marines in had ever received such praise. That review opens with the following passage in a tone of somewhat baffled pleasure:

In the dispiriting age of Bush and Britney, with our military still bogged down in Baghdad and our media still bewitched by Beverly Hills, an accomplished, respected American writer (a recent National Book Award Winner, in fact) has published a serious patriotic novel. Its title, “A Free Life,” is not altogether ironic.

The reviewer's baffled pleasure becomes more understandable after you read a character's assertion – apparently echoed by Nan Wu and Ha Jin throughout the novel – that " has run out of strength. It's already rotten to the core."

Does anyone think it is a bit too soon to declare the rotten death of ?

By the way, among the nearly uniform odes from the media, I found one dissenting voice: "Tongue-tied: Neither the author nor the protagonist in 'A Free Life' has what it takes." And I hope my own view above also helps a bit on balance.

I think that's about how long it took me to read Ulysses in grad school.

I suppose I should skip finding a copy of this one and continue reading the translation of Wolf Totem.

Hey XJ, just catching up on your reviews here...fascinating, I loved reading them. I didn't care much for "waiting" even though I recognized the genius. And since then, I haven't picked up another Ha Jin book.

I really like Ma Jian though. But he doesn't write in English does he? We have to wait for a translation of that one.

Hi Elaine, nice to see you here! How are you doing lately? I like Ma Jian too. Actually several his novels have been translated to English, the most recent one "Beijing Coma." I haven't read it yet but it seems to have a quite big success in the US.