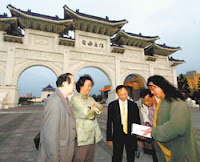 "Misery literature shouldn't be grievances only. If a writer has political or ideological mysophobia, is unwilling to gamble his own fate, or is unprepared for exile at any time, then he doesn't deserve to be called a misery literature writer," said Inner Mongolian novelist Yuan Hongbing, author of Freedom in Sunset and Premature Death of Literature.

Yuan said he always reminds himself of such. He fiercely oppugned writer Meng Lang, founder of the , because two years ago, while in exile in , Meng Lang dared to publish a book in mainland .

In response, Meng Lang said he never considered himself to have the status of a writer-in-exile, and called himself only "a writer with an exile flavor." Meng Lang said: "Although mainland does not have freedom of speech, I am willing to use whatever means, including publishing books, to broaden any crack in thought control. I also don't think a dissent writer should relinquish opportunities to publish books in the mainland."

Bei Ling then slammed the Chinese government's literature policy that lauds some writers. He believed that "besides Yan etc, there are many excellent writers with free souls. The mainland government's approach is to marginalize those unconstrained writers."

Poet Yan Li, who has been operating an underground literary magazine in for decades, asserted that "Insistence on independent writing is the most necessary attitude for an intellectual. Literature should not be kidnapped by political interest, much less by the capitalist market economy." He revealed that many excellent poets in mainland couldn't join the Chinese Writers Association, because the authorities only liked writers who didn't write about contentious subjects.

Fu Zhengming has been concentrating on issues for a long time, and edited Selected Poems by Tibetans in Exile and Poems from the Snow Land. He jeered at those writers and scholars who frequently showed up in 's TVs as the government's propaganda tools.

The participating writers gibed each other, so sharply it accelerated the pulse. Interestingly, the poets and writers originally planned to walk to and recite their work aloud on the way, interacting with passersby, even intending "not to exclude naked running." However, this interaction did not happen, perhaps because of their introverted personalities. Only their heated arguing attracted some sidelong glances. After arriving at , they read their work for about half an hour and did nothing surprising.

Email ThisBlogThis!Share to TwitterShare to FacebookShare to Pinterest
Labels: China and Chinese, writers and literature