U.S.: Lead, Follow or Get Out of the Way 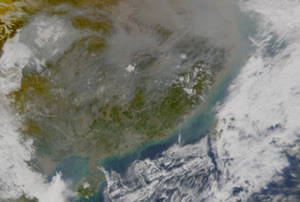 A decade ago, in 1997, the refused to sign the agreement on greenhouse gas emissions, which applies to industrialized nations only. This position has been criticized frequently in the years since.

Then last week, many countries sat down again, this time in Bali, to discuss a new set of emission standards that will replace the accord set to expire in 2012. Out of comes a framework for negotiating a new agreement, expected to take two years to finalize. It is to include but distinguish developed and developing countries. Not surprisingly, the and were both in the limelight during the conference.

Once again, it was the and not that stood up and said no. After extending the talks an extra day in the hope of consensus, the representatives said they were not willing to support the process. This brought about a great deal of jeering. According to CNN, at this point, the delegate from tiny Papua New Guinea dared the to lead, follow or get out of the way. Whether rising to the challenge, intimidated by the jeering or simply making a course change, the lead US representative reversed herself and gave the thumbs up to start the more formal negotiations.

There are some indications that the may have tried to influence and in the position they took at the conference, requesting that those countries reject any binding emission targets. Indeed, did just that: ’s representative stated that it was not "fair to ask developing countries like to take on binding targets." Whether this statement was the result of influence, or was ’s own response from the start, will probably never be known. If something was attempted, the ironic twisting of the knife came when said that the US should bear the brunt of the cost of new measures to control global warming.

So in the end, the , and almost every other country in the world, did declare a willingness to be part of the process. As far as I know, there are indeed some initiatives in to move toward the reduction in greenhouse gas emissions. This summer in my annual visit to , I was surprised to see a good sized wind farm on the edge of the when I flew out of ’s . And certainly the Three Gorges Dam (which I hate) on The Yangtze will, assuming it lasts, produce a great deal of hydroelectricity for . Both are renewable resources with little pollution.

But in all of this I have to go back to a conversation I had with an official from the Transportation Bureau under 's Central Planning Committee, back when I myself was a transportation engineer, shortly after my graduation from MIT. At the time, 's auto industry boom had just begun. During a business meeting in , I commented to the official that would have the chance to develop a more rational public transportation system and not be driven into a corner by the automobile as happened in the . Usually mild mannered man, he got really mad and said, "You Americans already got the good life, now you don't want us to have it!"

At the time I was taken aback (I had always considered myself more Chinese than American), but on reflection, the response is not unexpected. Everyone wants to be able to choose the dream they want to pursue, and nobody wants others to tell them not to. Not making it, not getting what you want, living in misery – these are all things that the Chinese have faced with equanimity for thousands of years. Now they are wholeheartedly pursuing rapid economic development. Should that falter, or come to a crisis, there is no doubt the Chinese will adapt. It is the imposition from outside that is not tolerable.

Now that the world is facing a severe environmental crisis, it brings us to the essential question: Is it more feasible to stop poor nations from developing, or to change behavior of the rich ones?

I don’t know the answer to the question, but it is important. It will be interesting to see the story unfold.

Email ThisBlogThis!Share to TwitterShare to FacebookShare to Pinterest
Labels: America and Americans, China and Chinese, economy and environment, International

"there is no doubt the Chinese will adapt. It is the imposition from outside that is not tolerable."

Or as Abraham Lincoln, no mean student of human psychology, put it, people don't like to be pushed even if it is where they want to go.