Mao: The Unknown Story by Jung Chang and Jon Halliday 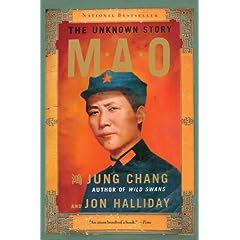 Here are some interesting statistics on Amazon.com about this book:

A number of Amazon reviewers, such as the most helpful critical one, have argued more eloquently than I could that this book's patronizing writing and judgmental presentation makes it read like totalitarian propaganda. I wanted to point out another bit of irony that no one else seems to have brought up.

In her previous book, Wild Swans, which has writing I admire but content that could benefit from more honesty, author Jung Chang notes in front that "in order to describe their functions accurately" she has changed the translation of "xuan-chuan-bu" ("the Department of Propaganda") to "the Department of Public Affairs." The author's father, a heroic character in the memoir, had been a co-director in such a department (in my home province - Sichuan).

Guess how she translates the same "xuan-chuan-bu" in Mao: The Unknown Story? Well, you guessed it. It is changed back to "the Department of Propaganda." Mao once headed such a department. This time Chang does not provide a note on how much she cares about the translation accuracy.

So why the need to deploy hypocrisy?

Because: though Jung Chang was a Red Guard during the Cultural Revolution, and her parents were active and loyal members of the Communist Party, they did nothing bad. They were all good. Objects that were once associated with them must be translated in commendatory terms accordingly. "Love the house, love the crows stopping on its roof."

And: Mao was evil from birth to death. He was all bad. Thus the same objects, when associated with him, must be translated in derogatory terms.

In China we call this "Red Guard language." Jung Chang was a Red Guard at the critical age of learning – and she apparently picked up the language well, even decades of living in the West have not made her drop it.
Posted by Xujun at 9:27 AM

Email ThisBlogThis!Share to TwitterShare to FacebookShare to Pinterest
Labels: book review and interview, China and Chinese

The kinds of bias that you describe are common world wide, not just in China. It's what makes understanding difficult.

IMO no one is all bad or all good, it's the balance that we should be seeking. Did Mao help or hurt his peiope. The same for Geo Bush, for Pol Pot, for Hitler, for Ghandi, etc, etc.

Thanks for commenting, Jerry. For anyone who's looking for understanding, this book won't help.

I read bits and pieces of the book. It made sad that the author had clearly done an amazing amount of research, and then just wrote what she would have written without the research. A great loss. Had she just written about what she uncovered it could have been a wonderful, probably historic, book.

I just ordered Phillip Short's biography of Mao which I take is more balanced. I had tried to read The Unknown Mao but found it too horrific. It was more than I could bear.

I also ordered Fenby's biography of Chiang Kai Shek. I hope it's the best choice.